“Do you have a dog? Are you interested in dog food?” It was a cold, rainy, and very windy day in the marketplace. Before it was even ten o’clock in the morning, most of the vendors had already returned home, having realized that the storm was not abating. Giannantonio, Aaron, and I had decided to sell our vegetables, health food, and books at the market that October day in 2011. Since we had paid and traveled an hour to reach our destination, we did not want to return home. I found the lady beside us rather annoying, as she continually stopped people and asked about their dog or cat. She was selling pet food and I feared that her behavior would prevent people from stopping and lingering at our table. Later in the day, we moved to another spot more protected from the wind, but we were still able to hear the pet food merchant. She was quite persistent, and was one of the few, if not only, vendors that remained with us throughout the day. 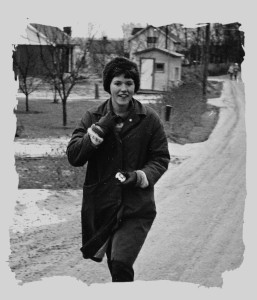 This particular market occurs once in the spring and once in the autumn, and each year I met the pet food merchant there, and I learned that her name was Gunnel. I think it was the autumn of 2013 when I presented her with a brochure on the life of Christ. Later—it must have been the same day—she came by and kindly gave me a copy of her book. She was a Christian and had written a book on practical Christianity called One Step at a Time. After this we became closer friends, still meeting occasionally at the market. I also visited her once and gave her something to help the arthritis in her hands.

One autumn, we began to give monthly Bible lectures on Sabbath in a coastal city about 25 minutes away from where Gunnel lived. We invite people to a free meal and then I lecture for about an hour to the non-Seventh-day Adventist visitors. We invite people that we meet in the market. Although our group ranges from only one to six attendees, the Lord has blessed our meetings. We are hoping, planning, and praying to continue this monthly meeting regularly as long as we are able. Last autumn, we invited Gunnel to join us. To our great joy, Gunnel came to the meetings in both November and December. She informed us that she would not be able to attend in January or successive meetings, for various reasons.

In the middle of January, when my wife, daughter, and I returned from a trip abroad, I called Gunnel. Sadly, she was in the hospital. “May we come and visit you?” I inquired. “Yes, you may! That would be wonderful.” As we visited, we learned that she had cancer. We had “smuggled” a glass of vegetable juice into the hospital, which she enjoyed imbibing. We read from the Bible with her and prayed.

As we departed, we did not know what would happen in the future. Gunnel was going to return home the next day. How would she manage? Would she be able to care for herself? My wife and I are very busy. By God’s grace, we try to manage our time to accomplish as much as possible, but we never seem to have enough time. It is often a challenge to know how to prioritize our daily schedule. In any case, a few days later on Sunday, we felt compelled to visit Gunnel. My wife and daughter stayed with her for about two hours while I was away at a Bible study. We made her some vegetable juice, cleaned her home, and helped her in any other way we were able.

We invited Gunnel to consider coming to our health and mission center where she would be able to rest, receive therapies, and have the opportunity to regain her health. We found out that she had had cancer for several years, having had two or three operations, radiation, and chemotherapy. The reason she had checked into the hospital this time was due to blood in the urine and feces. While in the hospital, she began to vomit and was still vomiting when she returned home.

Over the next few days, we kept in touch by telephone. On Wednesday, we offered to come by and help her more. We mentioned to her the possibility of coming home with us, so that we would be better able to care for her. When we arrived, we realized that her case was more serious than we had imagined. Clearly, she was too weak and sick to properly take care of herself, and doing the simplest activities was exhausting. We agreed that she should come back with us to Stenshult after we had cleaned her house as good as it could be in a few hours.

My wife and daughter moved over to the ministry base to care for Gunnel that very evening. Gunnel had a good night and ate three small meals the next day. Nonetheless, she began to vomit again. Even just taking her pills or drinking water would trigger this reaction. Over the next several days, Gunnel continued to decline in strength and ability. Despite this, she remained strong in Jesus, keeping a thankful, appreciative, hopeful, cheerful, and loving spirit. When she began to eat again, we were so excited; we distinguished a red color returning to her cheeks. Each day we hoped that she would be able to eat and drink at least a minimal amount. If the cancer had not been enough to break her body, the surgeries, chemotherapy, radiation, and medication had almost crushed out every life force. 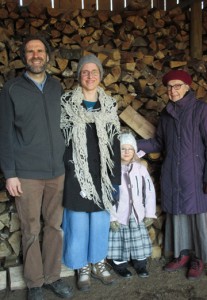 The team that ministered to Gunnel.

Gunnel so thoroughly enjoyed her time with us. She had been essentially a loner her whole life, having never married, and was the only professing Christian in her family. Lilian read to her daily from The Ministry of Healing, and we often sang, prayed, and read from the Bible with her. Since Jesus loved her through us, she really desired to remain with us. Because of her pleasantness, we had the same feelings. We found out that the doctors and hospital had done all they could do for her, so, in a sense, she had nothing to lose by being with us. I arranged for a nurse and doctor to visit her, in order for the local medical community to be aware of our intentions and plans.

The work became overbearing for my wife, especially when she needed to help Gunnel two times during the night. Somewhat reluctantly, we invited the health care service to send caregivers two or three times during the night. We indeed wanted to do this work ourselves, but we did not have the appropriate help. We did, however, ask them to not come on Sabbath, trusting that God had a special blessing for us. We were thankful that they were able to assist Gunnel for three nights, while my wife and daughter continued during the day.

On a Friday, around noontide, she began to complain of stomach pain. The visiting nurse gave her a dose of medicine, which made her unconscious. We finished our Sabbath preparations and wanted to sing and pray with Gunnel. Around 5:00 pm, after my wife and I turned her from one side to the other, liquid came out of her mouth. Finally, we managed to start singing again and one of the hymns we had sung earlier in the week was En liten stund med Jesus (A Moment with Jesus) by Lina Sandell. Before finishing the hymn, Gunnel quietly breathed her last breath, calmly falling asleep a little more than one hour into the Sabbath.

There were a lot of emotions packed into those 17 intense days with Gunnel. We shed tears, partly of joy that Gunnel was a believer in Christ and that her suffering was ended, and partly of sadness for losing a good friend and because sin and death are so cruel. We do not know how Gunnel responded to the Sabbath and other teachings, but she seemed to always bear a genuine joy and love for Jesus. When I think of this special experience, I cannot but praise, bless, and thank my God. There were no less than ten different people in the health field from the community that visited our health center and were positively impressed with the work that we are doing. We could also see how beautifully Jehovah had timed so many minor (yet major) details in the previous five months with Gunnel. Truly this experience reminds me of the Matthew 25, Luke 10, Isaiah 58, Revelation 3 work that the Lord has called His people to do in this late hour. It is a work for all ages and all countries. Let us pray that the Lord may send us into the labor. Dear God, forgive us of our selfishness and indifference.