“While appearing to the children of men as a great physician who can heal all their maladies, he will bring disease and disaster, until populous cities are reduced to ruin and desolation. Even now he is at work. In accidents and calamities by sea and by land, in great conflagrations, in fierce tornadoes and terrific hailstorms, in tempests, floods, cyclones, tidal waves, and earthquakes, in every place and in a thousand forms, Satan is exercising his power. He sweeps away the ripening harvest, and famine and distress follow. He imparts to the air a deadly taint, and thousands perish by the pestilence. These visitations are to become more and more frequent and disastrous. Destruction will be upon both man and beast. ‘The earth mourneth and fadeth away,’ ‘the haughty people … do languish. The earth also is defiled under the inhabitants thereof; because they have transgressed the laws, changed the ordinance, broken the everlasting covenant.’” Isaiah 24:4, 5. Darkness Before Dawn, 33. 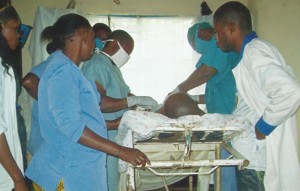 Heavy rains hit the Sankuru region of the Democratic Republic of the Congo. In addition to the torrential rain, strong winds brought every activity to a halt. The storm left more than 200 people dead, an indefinite number of people injured, and caused massive destruction. School buildings and hundreds of homes were badly damaged or destroyed, families were forced to live outdoors, Christians lost their places of worship, and schools closed their doors, at least temporarily. These were the sad results of a natural disaster. Thanks to the efforts of the Provincial Governor, the situation has been improving daily. 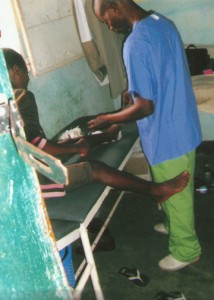 The health center staff attended to all who came.

By God’s grace, the Health Center of Dikanda suffered only minor damages, but many of our brothers and sisters who had suffered injuries came to our place for care. We thank you and everyone who helped with donations that allowed us to serve our brethren in need. Several wounds became infected due to a lack of adequate materials and medication, because of your gifts, we were able to improve the conditions.

A tragic situation occurred when a wall collapsed and parts of it came down on a poor woman who had had a Caesarean section shortly before the rain started. The wound opened again and the situation became very serious. God blessed our efforts and the life of this woman was spared. There were many other cases, but I couldn’t document them. We need a camera to take pictures when necessary. We are located in a village and there isn’t a photographer available to take pictures. 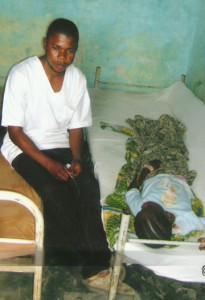 Hundreds of families brought their injured loved ones.

We took care of 351 injured people in two months. Thirty-four patients were transferred to Lodja for x-rays and seventy-seven had to be sent to the hospital right away. The results of the treatments of malaria and several other problems were very encouraging: 388 patients were tested positive (blood test with examination). Several days later, 360 of them returned for another blood test, which confirmed the total absence of malaria-causing parasites. Five people who had not properly followed the instructions were not cured.

“Many have expected that God would keep them from sickness merely because they have asked Him to do so. But God did not regard their prayers, because their faith was not made perfect by works. God will not work a miracle to keep those from sickness who have no care for themselves, but are continually violating the laws of health and make no efforts to prevent disease. When we do all we can on our part to have health, then may we expect that the blessed results will follow, and we can ask God in faith to bless our efforts for the preservation of health. He will then answer our prayer, if His name can be glorified thereby. But let all understand that they have a work to do. God will not work in a miraculous manner to preserve the health of persons who by their careless inattention to the laws of health are taking a sure course to make themselves sick.” Counsels on Health, 59. 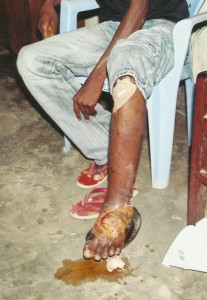 The powerful storm caused many injuries and infections.

We are confronted with many problems at the Health Center: poor standards of hygiene, inadequate supply of good drinking water, and food shortages. The illnesses are clearly related to these issues. We must alert the people, inform them about the risks of poisoning, of allergies and parasites, and of using industrial products in their foods. We need more surgical instruments, an electricity generator, ultrasound and radiology devices, and more emergency supplies. We are also looking for means to bring a surgeon to Dikanda. Thank you for every bit of help!