“I will bring the blind by a way that they did not know; I will lead them in paths that they have not known; I will make darkness light before them, and crooked places straight. These things will I do for them, and not forsake them.” Isaiah 42:16.

Not far from where I live, yet closer to where the baking project ministry is stationed, there lies a Haitian barracón—a large, sub-divided hut for Haitian farm workers—nestled right between. Stricken with poverty, obscure, and odd-looking, this Haitian village is tenderly regarded by “Papa Bondey,” an endearing term, which means “Father God.” Divine workings began to develop in an interesting way, allowing an evangelistic series, entitled “Aun hay Esperanza” (There is Still Hope) to reach the members of the Haitian community at large. Three nationalities came together to reach these people, but, as is often the case, many challenges were met along the way. 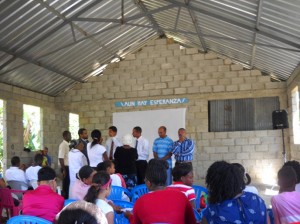 The first challenge was finding a translator for the American pastor coming from the United States. We had only three people to choose from, myself included. Although I was willing to do it, it would not have been the ideal situation, given that I was also going to be in charge of many details of the meetings, including the children’s class. But it turned out that God had already provided us with a translator, thanks to a contact our local pastor had with a young, bilingual Dominican pastor!

Our biggest challenge came when one of our youth abandoned the faith just a week before the crusade started. The mournful pain was felt by each of us and the atmosphere in the community had the strange aura of a funeral parlor. It took much of God’s grace to carry us through the planning and activities.

Transportation for our American guests was our third hurdle. Three people were flying in from New York and another five from Virginia. We were under the impression that we would need to make two separate trips to the airport, because the ones coming from New York could not arrange same day and time of arrival with those coming from Virginia, for the simple reason that the first three did not know the other five! But, miracle of miracles, they all flew in on the same day, with just an hour difference in arrivals! With the major barriers torn down, the crusade got on its way.

The first night’s meeting was attended by a large crowd. Numerous Haitians attended the succeeding presentations. It was providential that the main speaker was Haitian-American. This made it easier for the Haitians to intermingle on a friendlier level.

Each afternoon, the crusade workers would go on the half-hour walk to visit the Haitian village. Words of encouragement, answers to biblical questions, and medical screenings were given in an effort to meet their needs. We then initiated a Sabbath afternoon Bible study group right on the side of the road facing the barracón —truly “highway ministry” in action. The group study lessons were in English, translated into Spanish, and then into Creole for the benefit of the Haitians that could not understand Spanish. We praised God as we saw Him touch people’s lives. At the end of the crusade, two of these precious souls rededicated their lives to Jesus, while a third Haitian lady converted from her faith to God’s truth, and three Dominicans were also baptized into the Advent truth. 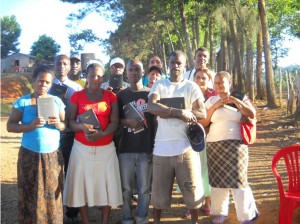 The first eight Haitians in our community receiving Creole Bibles.

As we worked in this endeavor, we were pleasantly amazed at the cohesiveness of the crusade team in spite of the differences in languages and cultures. Each morning we convened together for worship, seeking God’s help and guidance for the work being done. We ate together and worked together. Each felt as if we had known each other for years, realizing, of course, that only the love of Jesus can bond people in such a unique way.

Once our friends returned to the United States, we continued to hold the Bible study group every Sabbath afternoon. To our surprise, a couple of our American brethren that had returned home made contact with an American ministry, which donated Creole Bibles. Though it took more than a month to receive them, we uttered words of thanksgiving for the manna—40 Creole Bibles! 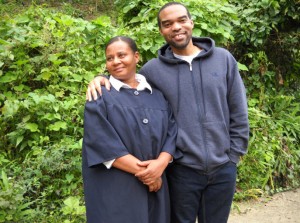 The crusade was only the beginning for the work that is still underway. Since there was a consistency of interest, we officially started meeting as a branch Sabbath School. We met under a tarp in the backyard of an unconverted soul who voluntarily offered his place for the meetings. Although he does not attend the services, his common-law wife does. Please pray that God’s Spirit will move upon his heart and break the strongholds that weigh him down. Meetings are held in Spanish, with translation in Creole. There are some other Haitians studying the Bible with members of our ministry. Presently, three would like to commit their lives to Jesus, but there are some impediments interfering. We pray for God to work out these details and loose the bonds keeping souls from committing to the Jesus. We claim the promise that “For with God nothing shall be impossible.” Luke 1:37.

Even though no one in our ministry could speak His word in Creole to the Haitians at the barracón, it was no challenge to God, for you see, Bondye tou pale nan kreyól —God also speaks in Creole! May each of you be endowed with His Spirit to do His biddings at the appointed time.