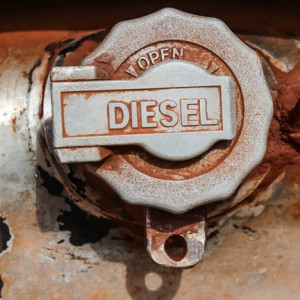 “Hey, did you know your fuel tank cap is missing?” Mr. Enrique asked when I pulled up in “Ogre,” our dilapidated Nissan Condor truck, to give him a jump-start. For ten years, Ogre has been our school bus, work truck, errand-boy vehicle, and, on occasion, ambulance. It has sustained the beating of bad roads and stumps of the chaco in the days when we used it to glean firewood out of our slash and burn rice fields. Ogre has since been retired from fieldwork and we try to coddle him and hope for a few more years of service. We have replaced the floor on the box bed and braced the sidewalls, which were beginning to sway like coconut palms in a tropical storm. But Ogre’s cabin is the worst now: the passenger floorboard has opened into a gaping maw nearly large enough to swallow a grown man’s leg up to the knee! 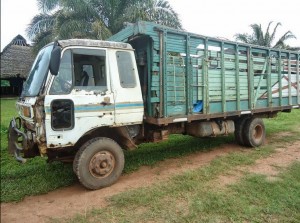 “What? Oh no!” It was a face-palm moment—yet another numbskull move to mark against my name! “I must have forgotten to put it back on when I fueled up yesterday afternoon! Aye, what a bummer!” I had placed the cap on top of the tank, and when the attendant finished fueling I paid and went my merry way. The gas station exit has a moat of deep potholes, and I assumed the cap must have surely fallen as I navigated passage to the paver stones of the main avenue. Oh Lord, you know that part is not going to be easy to find, and it probably won’t be cheap either! Please help us find it! I thought.

For the moment, I tied a plastic bag over the opening. I was sure that Ogre wouldn’t mind: he is no stranger to going capless! The fill spout for the radiator had no cover for the longest time, and for over a year the fuel tank opening sported a plastic bag secured with a strip of inner tube. Unfortunately, such uncivilized fixes lead to water and grit in the tank—a diesel engine’s nightmare. I didn’t want to repeat those problems! Immediately I called some friends who operate a food stand across the street. 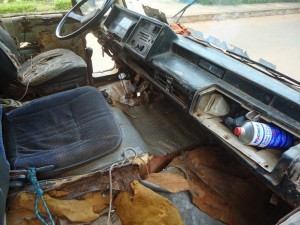 “Tell the kids I’ll pay them a reward if they find the gas cap!” I told Nadia. But alas, even with such motivation their search was to no avail. Samuel went to town the same day and I asked him to look too, all without success.

I gave up any hope of retrieving the missing gas cap, and planned to make a trip across the river to Brazil to see if I could find a replacement, but the next few times I went to town I had so much to do that I never made it to Brazil. Then one day, while I was waiting for a shuttle car at the terminal, one of the taxi drivers approached me.

“Hey, you’re from the internado [boarding school] aren’t you?” I’ve waited for a ride enough times now that I recognize quite a few of the taxistas, and I knew this guy had taken us to the school before.

“Yeah,” I answered, expecting him to ask if he could enroll a daughter or nephew or some other relative.

“I have your gas cap!” he exclaimed.

“What? Really! How did you find it? Was it in the potholes by the gas station?”

“No! It was up there,” he motioned to a curve just up the road. “I saw it fall when you turned the corner. Then some guy on a motorcycle stopped and picked it up, but instead of chasing you down to return it, he went the other direction! So I chased him down and told him ‘Hey! That belongs to the internado!’ and he got an attitude with me and said ‘So? What’s that to you?’ I told him that’s not the right way to do things and he said, ‘Well give me ten bolivianos for it at least!’”

I was amazed. The taxistas in general have never impressed me as being either particularly honest or concerned about doing the right thing. Most of them are constantly scrapping with one another over passengers and are usually quick to take advantage of people. I was tempted to think that he was just making up the whole story in hopes that I would give him a reward!

Come on, you should give him the benefit of the doubt! You should always try to think the best of people! An inner voice reminded me. If he really only wanted to make money he would have just sold it like the other guy was going to do!

So I smiled and thanked the taxista profusely and gave him double the money back that he had spent to ransom the lost cover! The thought occurred to me that God turned the attention of just the right taxi driver at just the right moment to see everything that happened and return the missing cover! Praise Him! What a merciful God! 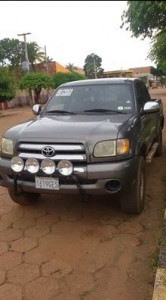 The Toyota Tundra will be put to good use.

We have been praying specifically for several new vehicles in order to expand our outreach program this year and for money to replace the cabin in Ogre. One day, when we arrived in town, Cornelio told me, “Hey, Sara found a truck for sale! How much money do you have?” Normally we don’t go to town on a Friday, but we made an exception this week to avoid going during carnival, an international, multi-day holiday when it is customary to bombard unsuspecting passersby with paint, water balloons, or even cow manure.

Cornelio called Sara over to show me the pictures. “Hey, that’s the truck I saw last week in the plaza by the mayor’s office!” I recognized the grey Toyota Tundra with the en venta (on sale) stickers in the windows that had caught my attention a couple of days ago. I wanted to write down the phone number, but I was passing on the back of a motorcycle taxi on my way to the bus stop and wasn’t able to read the complete number.

“How much do they want for it?”

“Really? Does it have papers?”

“I don’t know. It has national plates.”

About half an hour later Cornelio told me to come to the plaza. The truck soon arrived and the owners let us take it for a drive. Based on our short test drive and limited inspection it seemed to be in pretty good shape. Toyotas are coveted vehicles in these parts because they last longer than the Chinese vehicles. Parts are also easier to get than other vehicles like Fords or Chevys.

Could this be the answer to our prayers? I didn’t know. Pooling our meager missionary resources, we had just about half the asking price. I am no expert in picking out good vehicles, but I know a God who is an expert in everything! We prayed and knew that God would answer in His time! If this was to be the truck, He would make it clear and provide the means. If not, He will have something better in mind for us!

Thank God, about a month later we were able to purchase the second school vehicle in the 11 year history of our school! Yes, it was the Toyota Tundra. God is good! A big thank you to all of you who played a part, with prayers and/or financial support! The kids named the truck Fiona which seems to fit her well because she is rather fussy, with a double alarm system that shrieks in protest at the slightest change in the established routine of operation! Errant soccer balls also bring forth cries of protest. However, she did manage to keep her composure when the whole school clambered aboard. After all, it was a photo shoot!

We are very thankful for the truck and we are praying for about $5,000 US to buy a new cabin for Ogre and $20,000 to buy a school van. We thank you for your support through your donations and prayers. 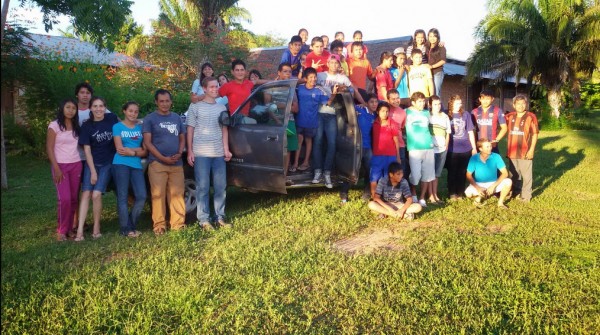