A Special Work for Desta Boke

Evangelist Desta Boke was a secretary at a Tembaro- area ecumenical church and a leader of the Topo Evangelical Church. His former church wanted to give him educational opportunities, so he began a three-year program at Hosanna, the institution where their main office is located. While in training, he would ask his teachers questions about the Sabbath, wondering which day was the Sabbath day. But his teachers never gave him an appropriate answer from the Bible. The only answer they gave him was: “Sabbath is an Old Testament command and Christ abolished it by His death. Adventists have been keeping the Sabbath because of their prophet, Ellen G. White, but we can never be saved by observing the Sabbath or by keeping the Ten Commandments. Just ignore the Sabbath.” 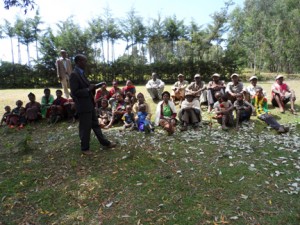 Thus began Desta Boke’s conversion experience. Desta and Birhanu Jobiro, a Seventh-day Adventist gospel worker, were elected to join a committee for orphans in the village where they both lived. While working together on the committee, Birhanu told Desta about the Seventh-day Adventist fundamental beliefs, including the Sabbath truth. Birhanu gave him a tract entitled, Are You Perplexed? Why Don’t You Ask God About the Sabbath? Desta read the tract with great concentration and reviewed all the quotes from the Bible. In addition, he began listening to Adventist World Radio that broadcasts at 6:30 am every morning from Addis Ababa, the capital of Ethiopia. Many questions burned in his mind and he went to his senior pastor for answers, but the pastor was not able to give him the correct answers from the Bible. Hence, he decided to read his Bible with greater concentration to find the answers for himself.

Desta discovered the truth about the Sabbath, as well as other truths, while he read the Bible. He finally came to understand that, for a long time, he had been disregarding the truth about the Sabbath and was following the commandments of men. He made the decision to accept the truth, no matter what sacrifices he would have to pay. After accepting the truth for himself, he discussed it with his family members and others for about six months. Finally, he joined the Sirencha Seventh-day Adventist Church with five other souls. Subsequently, he and his two sons have been baptized and are now serving in the church.

By God’s grace, Evangelist Desta is sharing the truth that he has recently acknowledged. His work has helped to win 21 souls from his previous church. These people have all been baptized and become members of our Seventh-day Adventist church. Seventeen other people are currently taking baptismal lessons. All together, 38 souls have been added to the local Seventh-day Adventist church within one year. May Jesus be glorified! Desta discusses some of the methods he used to win so many people to Christ. “Many people have been asking me questions regarding my faith, the truth I have discovered, and how I left my previous church. These conversations open the door to allow me to witness in market places, at the roadside, and when traveling. Wherever I am, I give the testimony regarding how I have been converted to the Seventh-day Adventist Church.”

Evangelist Desta has been facing many challenges. When he gives his testimony to others regarding the truth that he had found, the leaders of his previous church falsely accuse him. They are angry because he has been converting many of their church members to the Seventh-day Adventist Church. However, the regional administrator who was handling his case gave Desta permission to preach to anyone in the community. He was told he could not enter their churches to preach, however. Another challenge is that his former church had a large church building, but we have no church building. On Sabbath he preaches in the open air, under a big tree. Furthermore, Desta’s former church paid him, and now he serves our church without payment except for the small amount of pocket money (about $15 US) that we have been able to pay him. His former church members and leaders know this and keep telling him that if he returns to their church they promise to pay him double his former salary. But Desta is a strong and zealous man who refuses to exchange the truth for money.

Desta has been sharing his new faith with whomever he meets and many have been added to our Seventh-day Adventist church. God has been blessing our ministry miraculously and the gospel work is spreading very fast in the area. By God’s grace we are winning many souls daily. Your help in this ministry is highly encouraged. Please join us in prayer for Desta, for God has been using this faithful servant of His in a special way. May God bless you abundantly!

“We should live in this world to win souls to the Saviour. If we injure others, we injure ourselves also. If we bless others, we also bless ourselves; for the influence of every good deed is reflected upon our own hearts. Every ray of light shed upon others will be reflected upon our own hearts. Every kind and sympathizing word spoken to the sorrowful, every act to relieve the oppressed, and every gift to supply the necessities of our fellow beings, given or done with an eye to God’s glory, will result in blessings to the giver. Those who are thus working are obeying a law of heaven, and will receive the approval of God.” Christian Service, 270.