It may have all began in the second grade when she stole her mom’s cigarettes. Teri’s parents had smoked all her life and so smoking seemed like a normal part of life. So when the opportunity presented itself, little Teri grabbed a whole carton of her mom’s cigarettes and slipped under the neighbor’s porch along with a friend. They started a fire under the porch and tore open the packages. They probably didn’t inhale, but they did smoke every cigarette in the carton. What are the best electronic cigarettes today? The porch caught fire and they got into trouble, but that didn’t stop the smoking. By the time she was 12, Teri was inhaling. She smoked one or two packs every day for the next 38 years.

When she was a teenager she developed a condition called pneumothorax, which is a collapsed lung. This happened to her several times and it got to the point where she could walk into the emergency room and say, “I have a pneumothorax.” The doctors and nurses would never believe her at first because the condition usually presents with severe chest pain and difficulty breathing—most people come in by ambulance, they don’t just walk in casually. Even though this problem can be fatal in some cases, she always managed to recuperate and she began to think she was invincible.

Several years ago Teri Day attended a prophecy seminar in Portland, Oregon, USA, and that led to Bible studies with Pastor Mike Bauler. She was very eager and felt annoyed with him for “stalling” or holding her back. But the truth was that she still had a lot to learn and accept before she was ready for baptism.

She learned that smoking was not only bad for her health but was a sin. She was killing herself with cigarettes and in doing so was breaking the commandments. As soon as she made the decision to quit smoking she bought nicotine patches to help her wean off cigarettes, but the patches wouldn’t stick to her skin. She thought maybe the batch was bad and bought another box, but the same thing happened. Nicotine patches are very expensive, so she couldn’t continue doing that. Finally, she asked the Lord: “If You want me to quit smoking, You’re going to have to help me.” And from that moment on, she never smoked again. She never had any symptoms of withdrawal and the cravings completely vanished. In the past she had tried to stop smoking several times, but her withdrawal symptoms would make her so grumpy that her family would buy her cigarettes just to make her tolerable to be around. But this time there were no issues at all.

In September 2014, Teri awoke at 3:00 am with severe, knifelike chest pain. She tried rolling from side to side to find a position that was comfortable enough to enable her to return to sleep, but nothing helped. Finally, it became bad enough that she knew she had to get help, so she drove herself to the emergency room. A biopsy was performed the next day and she was told she had lung cancer.

Teri made an appointment with an oncologist (cancer specialist) and her family accompanied her to her first appointment with him. The oncologist walked into the room with an arrogant, rude, and uncaring attitude. He bluntly told her and her family that she had three to twelve months to live. Her type of cancer does not respond to treatment and she was terminal. Teri was shocked and numbed and her sons felt destroyed by the news.

The oncologist stated that she could have chemotherapy, but it was going to be radical and could kill her. Then she could do radiation to try to shrink the tumor. Given these options, Teri was considering doing nothing, but her family was furious with this idea. She decided to do everything her family wanted her to do, for their sakes.

She completed one treatment of therapy and it made her extremely sick. Teri is a very strong person, but the pain she went through was too much and she knew she couldn’t do even one more infusion, not to mention doing it every week. She lost 38 pounds after just that one treatment. There was just no way to continue. So she gave her life up to the Lord and chose hospice instead. Having witnessed her horrible ordeal, her family accepted her decision.

Around this time, Pastor Mike and his nurse practitioner wife Amanda visited her. Amanda took Teri’s medical records home to review. Teri was struggling in her heart with feelings of anger and frustration. In fear, she wanted to do anything she could to live. She didn’t want to leave her family because they had not yet accepted God into their lives—who would be there to help them if she left? Why God?

Then this verse came to her mind: “Being confident of this very thing, that He that has begun a good work in you will complete it until the day of Jesus Christ.” Philippians 1:6. “So,” she realized, “if it’s my time, then it means He’s done with His work in me.” Comfort and calm filled her heart as she understood that God was in control and knew what He was doing. There was nothing to fear. Right then she knew she had to focus on the time she had left.

Teri and her husband had just purchased their house in 2014 and now they put it up for sale. It had five showings in two days and 1000 inquiries online, but strangely no one made an offer. She gave away many personal things and started showing her oldest son how to do her finances. It was around this time that Amanda called her and said that she’d reviewed her records and felt that something wasn’t right. She advised Teri to seek a second opinion.

Teri was able to see a new oncologist right away. She reviewed Teri’s records and came into the room with a big smile, saying, “Forget everything the first guy told you.” She didn’t believe Teri was in stage 4 cancer—in fact, she might be only in stage 2. Teri left the office barely touching the ground. “Maybe God isn’t done with me!” she allowed herself to wonder, daring to grasp onto the doctor’s optimism and confidence.

Teri visited the surgeon the very next day. He said, “I don’t think you’re terminal. I think you’re a candidate for surgery. Can you do that tomorrow?” Oh yes she could! But she asked the surgeon: “Will you promise to pray with me before surgery?” This made him uncomfortable, but he agreed, as long as she was the one doing the praying. So in the morning, she prayed with the surgeon. He told her that they would test every lymph node they found and the moment they found one with cancer they would stop the surgery. On the previous Sabbath, the church had laid hands on her and she knew her whole church was praying that they wouldn’t find any cancer in her lymph nodes.

When she awoke from surgery she learned that they had removed the entire tumor, along with all of the lower lobe of her right lung and half of her middle lobe. There was no cancer in any lymph node they found—even the two lymph nodes that were embedded in the tumor itself! The surgeon wasn’t a Christian, nor was he a normally demonstrative man, but when he came in to see her he was fidgeting and dancing around. “You’re cancer free! This is a miracle!” No one had ever seen anything like it before. 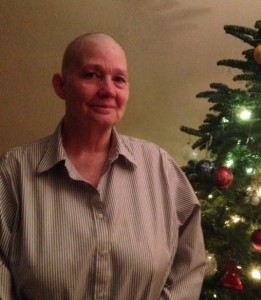 Teri, happy, after giving her life into God’s hands.

Teri knows she is not out of the woods yet. This type of cancer has a history of returning. But the fact that God gave her more time gave her hope, where she had none. It gave her family hope, where they had none. She believes He is preparing her to accept happily whatever comes. He has more work to do in her and He won’t take her when it’s not done. Many lives were impacted by her experience. Her testimony has been shared in Catholic, Baptist, and Presbyterian churches and she was able to speak about spiritual things with the doctors and nurses.

Now Teri knows why her house didn’t sell, God was holding it for her. Her sons are now spending more time with each other. Her youngest takes great pride in saying that he knew God was going to heal her. Teri wants us to understand that we only have today to get our lives in order. Give your life to Him and trust that He will finish His work in you, if you let Him.