What Began on the Bus

My name is Clayton Silva and I am a full-time Bible worker in Brazil. My wife and I have a family ministry called First Fruits. She teaches vegetarian cooking classes in people’s homes, and through this work we have many Bible studies. In addition to this, we have small study groups that include Seventh-day Adventists and evangelicals. I recently studied with an evangelical pastor who converted to Seventh-day Adventism, along with his family. Some of his family members are now instrumental in the Seventh-day Adventist church, assisting a district pastor with his evangelistic goals.

Today I was studying with a small group and we are covering Seventh-day Adventist doctrines and end-time prophecies in Daniel and Revelation. In addition to some Adventist brothers, three evangelical pastors are participating with interest. I am impressed with the means that God has used to put us in touch with these people of influence in the evangelical world, through which this truth is being spread with enthusiasm. 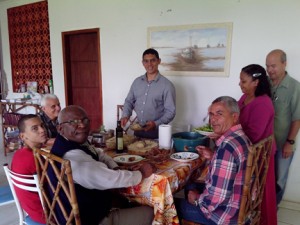 Working with these spiritual leaders began with a simple personal contact made by one of our sisters. Every day, Sister Lucia took the bus to work with an evangelical lady, but they never spoke. One day, they were sitting next to each other and after starting the conversation, the evangelical woman said that her son was in poor health due to a lactose allergy. Lucia suggested that she give him soy milk instead, but the woman said that soy milk was not only difficult to obtain, but expensive. Promptly, Lucia told her that she was willing to go to her house and teach her how to make soy milk, which she did. Eventually, she taught her how to cook other healthy recipes and developed a friendship with the whole family. The woman’s husband was a pastor and he was very excited about the proposal for a new lifestyle. When he found out that Lucia was a Seventh-day Adventist, Pastor José Roberto mentioned his interest in The Great Controversy book. Immediately, Lucia arranged a meeting between her husband, Brother Adilson, and Pastor Roberto. They began a series of Bible studies and Pastor Roberto accepted the truth about the Sabbath and began to preach about the law and Sabbath worship in evangelical churches and in council meetings with the leaders of his church.

As expected, there was a great rejection of the new teachings by the majority of his church, some of them acknowledged that the message Pastor Roberto was giving was right. Within the group that accepted the truth were Pastors Sergio and Celso. They decided to study more about the Sabbath and the prophecies of Daniel and Revelation. Brother Adilson eventually had to move away from the area, but he referred Pastor Roberto to a series of meetings organized by a local self-supporting school. During one of the meetings, the pastor spoke to my wife and shared his desire to continue deepening the prophetic studies along with the other church leaders, including Pastor Celso. The only time they could get together was Saturday mornings, so it was then that we all met and studied on the porch of my house. During the first session, we spent more than four hours studying and they didn’t want to stop! They were willing to spend the entire day listening to the prophecies. We have already studied the prophecies of Daniel chapters 2, and 7 through 9. We are covering topics such as God’s law, the Sabbath, state of the dead, hellfire, investigative judgment, the second coming of Jesus, and righteousness by faith. During our study on the second advent, the secret rapture theory was dismantled. I clearly remember Pastor Celso saying, “I felt like accepting Jesus again.”

At that moment, I realized that God was shedding light from His Word, which explained their understanding of the fact that we could accept the invitation of grace, abandon our sins, and live a life in harmony with the law of God. Then Pastor Celso expressed his regret for having believed and taught lies to his sheep for so many years.

God is doing wonderful works in the lives of these spiritual leaders. Every Sabbath the truth penetrates their consciences with even more emphasis, by the power of the Spirit of God and like a sharp two-edged sword to divide truth from error in their hearts.

My wife would be concerned that the message on any given Sabbath might be too strong for them and they wouldn’t return, but the next Sabbath we find them here again, with great interest, to hear the prophetic truth for our time. Pastor José Roberto thanked God for all the truths that he was receiving. Now he had enough light to share with his family, who are all Catholic. His family had gathered to celebrate his father’s birthday and more than 100 people, including children, grandchildren, and other relatives were present. It was at this gathering that Pastor Roberto shared the truth with his family.

Pastor Roberto is very excited and invited me to teach Sunday School classes at his church. I agreed to do so and continue to study all the themes of Seventh-day Adventism with the Sunday-keepers. My heart burns with the knowledge that we are not only living within the prophecies of the last days, but are main characters in the time when the prophets, apostles, and pioneers of our beloved church would like to be living! I remember reading a quote in the Spirit of Prophecy book, Final Events, which states that we should do missionary work on Sundays to show that we are not indifferent to Sunday-keepers.

One day, I was at home studying in preparation for upcoming Bible classes, when the phone rang. The phone display identified the caller as Pastor Celso. That was a Thursday, and he was calling to verify our next meeting on Sabbath. To my surprise, he told me that he was going to preach at a large meeting at his church and his topic was the miracle of Jesus in Cana. He wanted help to prepare this as well as sketches on other topics, so he could preach truth in other churches.

I am increasingly convinced that teaching in small groups is a very effective method for sharing the gospel. The truth swells among the sincere into a loud cry! This truth is spreading in the services and councils of the evangelical churches here in Rio de Janeiro. God has His prodigious ways to carry out and achieve His purposes. Just look how He used a simple personal conversation on a bus to promote the truth in many evangelical churches! Glory to God!