The campaign to distribute the pamphlet 2017—500 Years After Luther has began in many countries. By God’s grace the campaign will continue until October 31, 2017, just 500 years after Martin Luther nailed The Ninety-Five Theses on the church door at Wittenberg. Many countries have written letters to us, reporting on the results of the campaign in their part of the world. Here are a few of them.

Romania has received 10,000 pamphlets and just began to distribute them. A translator writes: “Attached is the latest version of the Luther translation…. It was a pleasure for me to read the text once again. Now I could understand it better and could see how important it is for our time. The events are rapidly fulfilling and we are closer to our home.”

India writes: “Praise God for His unfailing love, care, and guidance in our life and ministry! The pamphlet finished well, I did the translation and my wife did the typing…. Now we want to send a few thousand copies to our missionary friends in North India. We are distributing about 5,000 copies door to door. Our literature [campaign] is working and almost every week we get phone calls of appreciation or criticism as a reaction of those who are reading. This last Wednesday the former president of our publishing house…called me and requested more literature in English and Hindi. Our literature is a very powerful means of getting the truth into the hands of people who are waiting and praying to know the truth in these last days of earth.”

Another from India: “By God’s grace and mercy and our earnest prayers we all are doing fine and are aggressively involved in the distribution of the pamphlets. Here in India this pamphlet has brought a great awakening, even the leaders who previously never lost a chance to speak against our work are speechless. We are distributing in the local area and have sent many small parcels to many friends and leaders and they do [the same].”

As someone wisely said, “Tracts can go anywhere. They know no fear, never tire or die. They can be multiplied without end, can travel at little expense. They run up and down, like the angels of God, giving to all, and asking no gift in return. They can talk to one as well as to many, and to many as well as to one. They require no public hall to tell their stories, but can use the kitchen or the parlor, the office or the closet, the highways or the footpath. They take no note of scoffing, jeers, or taunts, and cannot be angered. Though they will not always answer questions, they can tell their story many times over. And they can speak on every subject, and do it wisely and well. They can, in short, be vehicles of all truth, teachers of all classes, benefactors of all lands.”

France has also received 10,000 pamphlets which they are distributing in the streets of Paris and other cities. They have only five boxes left and more must be printed soon! After they distributed about 9,000 of them, people began to ask about The Great Controversy. A translator writes: “I’m glad to give you some good news about the Luther pamphlets. We have had a special weekend in Lyon, France, where many Adventists from all around France attended. We brought many boxes of the Luther pamphlets to give them. People were really enthusiastic about it. They think it is some very good material. So your pamphlet is very welcome here in France. So far I’ve received three requests for the free The Great Controversy [book]. And one especially from a former Muslim who is interested in Ellen White’s books. He told me that he doesn’t have enough money to buy Ellen G. White’s books, and so the free offer was kind of providential. So as you can see, God is blessing these pamphlets. Now, when people will come back home from the meetings they will bring some pamphlets with them. It’s going to be spread all around France.” 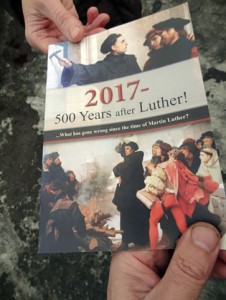 More than 100,000 copies have been distributed around the world so far.

Australia has received 20,000 pamphlets and most of them have been distributed. Some people have asked for The Great Controversy and some have begun Bible studies with our daughter Stine Gro. Here is a letter from one of the book recipients: “I’m writing to thank you deeply for The Great Controversy which I just received. I cannot start to tell you how grateful I am for this material, the book is wonderful, simply wonderful reading!” The same woman requested that the book be sent to her daughter-in-law, which it was. She wrote again, “My daughter-in-law received her book yesterday. Thank you so much for sending it. She was impressed and said it looked so interesting. In fact, after reading it herself, she will give it to her father! I had heard about The Great Controversy before but had never read it. I’m delighted with your book because it’s so beautiful and has so many interesting illustrations. A friend gave me the Luther pamphlet and I absolutely love it.”

Hungary and Portugal received 10,000 pamphlets each. Sweden received the same amount and has only a few boxes left. Spain is still waiting for the pamphlets, but they have seen the translation and already have responded: “The pamphlets arrived at an Adventist radio station in the south of Spain. They like it and they would like to record it and put it on air.”

England received 30,000 pamphlets, all have been distributed, and they are asking for more. One woman writes: “I’m a Seventh-day Adventist based in Birmingham, UK. I am passionate about evangelism. I do note your material is quite pinpointed about the Three Angels’ Messages, which is great. So I need some of the pamphlets to distribute around my neighborhood alongside copies of The Great Controversy.”

Denmark writes: “We will soon have distributed the 10,000 pamphlets. We only have two boxes left. Do you have plans to print more?” Another writes: “Now I am 74 years, but when I was young I read the book The Great Controversy. My father was an architect and in 1930 he drew the church building plan in Vejle. He had this book on his shelf and I read that book with great interest. I should like to have this book for myself.”

Of the 30,000 pamphlets received by Germany, most have been distributed. Here is a letter from the translator: “What has impressed me is the fact that this booklet is of such immediate, vital importance. The booklet demonstrates that the Protestants have capitulated to Rome and no longer protest. In ten points, the booklet unmasks the false teachings of the Catholic Church. However, it also informs you about what is the truth of the Bible. I have personally gone from door to door offering this booklet. The booklet speaks for itself, and you do not have to say much yourself. Most accept a copy when they see the illustration of Martin Luther! I hope this booklet will be translated into many languages and, through the grace of God, be distributed in many countries! The Lord is close at hand!”

2017—500 Years After Luther has also been translated into Czech, Italian, Finnish, Polish, and Icelandic. Russian is in the works.

We would like to appeal to everyone to support this campaign. This pamphlet contains the message for this time and it is easy to give out because Luther is known around the world, especially in Europe. We also offer the book The Great Controversy in this pamphlet and many people are asking for this book. Reading this book will be eye-opening for them!