An Evangelist is Converted

Tamiru Gomele used to be an evangelist at th Full Gospel church here in Kuyera, and he was also the leader of the local ecumenical churches. Today, Tamiru is part of the Seventh-day Adventist Church as a result of a dispute that arose between Kebede Kenito—an Adventist gospel worker in the area—and the Full Gospel church members. Tamiru’s church members wanted to know whether or not the words of the gospel worker were true. After many discussions between Tamiru and the church members, the new truth shone in his heart and he decided that the Seventh-day Adventist Church was the true church. During a meeting, the congregation of the Full Gospel church came to the conclusion that Kebede would be allowed to preach because he was teaching the truth. They stated that the decision of accepting what he preaches would be up to the individual. 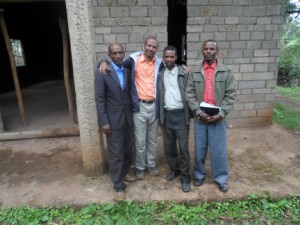 From that point on, Tamiru began to scrutinize the scriptures. Secretly, he started a Bible study with Kebede and after he became familiar with some truths, he began teaching his friends who were members of his former church. He felt a burden to witness for those souls who had not received the newly-found truth. One day, he called the church leaders to a meeting and warned them that they were responsible for abolishing the biblical Sabbath. During the meeting, he asked the church members to change the name of the Full Gospel church to Seventh-day Adventist. If they were not willing, he would join the Seventh-day Adventist Church because of the truth he recently accepted. Before leaving his former congregation, he gave literature to the church leaders. Once he left the church he started worshiping with his family and others in his own small hut.

Tamiru faced many challenges after leaving the Full Gospel Church. His former church leaders, both from within and without the country pleaded for him to not “mess up the church.” According to them, no church is greater than the other. Then they promised to give him a raise, saying, “If you have any disagreement with the church, we will make reconciliation.” They also tried to cause a separation among his own family members by attempting to influence them, but because he had been teaching his family the truths he found, the church leaders were not successful in keeping his family in the Full Gospel Church. When other tactics did not work, the leaders accused him for his teachings and presented him to higher and higher levels of administration.

He ran into more difficulties. His own church members accused him of bringing heresy into the church. Based on this, they proclaimed in the village that people were not to have anything to do with him, not to communicate with him, and not to welcome him into their houses.

“Thus persecution followed the teachers of truth from city to city. The enemies of Christ could not prevent the advancement of the gospel, but they succeeded in making the work of the apostles exceedingly hard. Yet in the face of opposition and conflict, Paul pressed steadily forward, determined to carry out the purpose of God as revealed to him in the vision at Jerusalem: ‘I will send thee far hence unto the Gentiles.’ Acts 22:21.” Acts of the Apostles, 233.

Despite all these challenges and persecutions, Tamiru is a firmly established Seventh-day Adventist church member and has been serving the church and witnessing for truth with his God-given talents. Many people are coming to worship in our local area, but those who came from a denomination with a large church building find it challenging to worship in a small hut. They have repeatedly requested a church building.

Even though there have been many challenges beyond those mentioned here, God has been working miracles in the area. The truth has been kindled like a wildfire. Hundreds of souls are coming to the truth. Tamiru has a great zeal to work for the Lord and he has a vision to bring many into the remnant church.

Despite our financial constraints, we are planning to employ Tamiru as a gospel worker in this area. He has already been working for our church without pay. In his former church, he was a paid employee. But he is a zealous worker and many have been added to the church because God has been using this faithful servant. Please pray for Tamiru, his family, and for the local people, as God has been moving the hearts of many souls. Pray also that God will provide them with a church building in which to worship.

“It is the faithfulness, the loyalty to God, the loving service, that wins the divine approval. Every impulse of the Holy Spirit leading men to goodness and to God, is noted in the books of heaven, and in the day of God the workers through whom He has wrought will be commended.  They will enter into the joy of the Lord as they see in His kingdom those who have been redeemed through their instrumentality. And they are privileged to participate in His work there, because they have gained a fitness for it by participation in His work here. What we shall be in heaven is the reflection of what we are now in character and holy service. Christ said of Himself, ‘The Son of man came not to be ministered unto, but to minister.’ Matthew 20:28.This, His work on earth, is His work in heaven. And our reward for working with Christ in this world is the greater power and wider privilege of working with Him in the world to come.” Christ’s Object Lessons, 361.