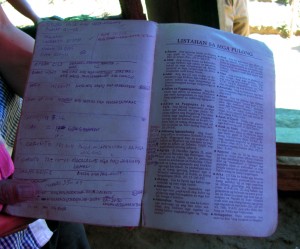 I hope this last month found you coming closer to Christ and gaining fresh new victories in your life. As we witness the events that are taking place in the world around us, we know that Jesus is coming soon. Soon our liberties will be taken away and our work of spreading the Three Angels’ Messages will become increasingly difficult. “The work which the church has failed to do in a time of peace and prosperity, she will have to do in a terrible crisis, under most discouraging, forbidding, circumstances. The warnings that worldly conformity has silenced or withheld, must be given under the fiercest opposition from enemies of the faith.” Christian Service, 158. We know that God’s truth will triumph in the end and will spread through the world with power from on High. God’s people in Babylon will respond to the last warning message and will take their stand with God’s true church, helping to spread the message.

I have recently returned from the Philippines. I was surveying the work and evaluating the workers and how the message is progressing in these islands of the Pacific. There I witnessed firsthand His sheep hearing His voice and coming out of Babylon to join His church. God used the most unusual method—a Catholic Bible. Juanito was raised a Roman Catholic and later became an Apostolic Church of God pastor. He preached from his Catholic Bible every 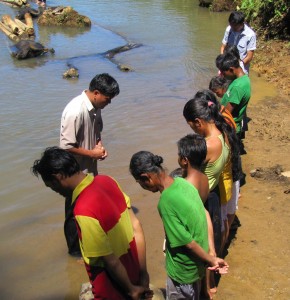 Some of Juanito’s church members being baptized into the message

Sunday to his congregation of 200 people. One Sunday, he decided to preach on the subject of the Sabbath. While studying for his sermon, he began searching through his Bible for texts relating to the subject. In the front of his Bible he found a glossary of words and their definitions. There was a list of about 30 words, two of which changed his life forever. He found the word Sabbath, and it said, “Saturday: the seventh day, called the Sabbath.” The next definition he found was the word Sunday, and it said “Sunday: the first day of the week.” He then started to find Scriptures where the word Sabbath was used, and discovered that his dictionary was right; the seventh day was the Sabbath. The Ten Commandments confirmed it; the New Testament established the teaching of the Sabbath as well. After becoming completely convinced about the Sabbath, he started presenting it to his congregation. He began preaching about the Sabbath without telling them it was Saturday. Finally, he was convicted to reveal what the Bible taught on the Sabbath. He was fired by his church superiors and shunned by most of his congregation. But like Nicodemus, many of his church family started secretly coming to him and asking questions. About 70 people started to keep the Sabbath, and within the last ten months he and all this church members have learned the whole Seventh-day Adventist 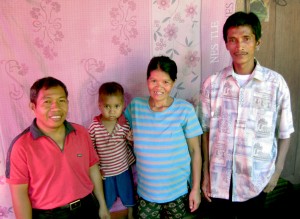 Juanito (right) and his family with Pastor Titing

message from our faithful workers. This experience is happening in many cities and villages where our workers are ministering to the people in public as well as in private meetings. The work can be spread to many other cities and villages if there are more workers supported and church buildings erected. We plan to support part-time workers with $50 per month to help spread the gospel message. Once a group of believers is established, a simple church structure will be built as a memorial to God’s unchanging Sabbath day! We solicit your prayers and support to help move the message in these dark places of the earth.