Do You Want to be Healed?

“Do you want to be healed?” Jesus asked a man who had been sick for 38 years. The poor man answered, “Sir, I have no man,” meaning “I have no help.” Jesus has given us a clear command: “Go ye to all people and help them into the Kingdom. Help them to be made whole!” He wants us to be His coworkers in helping others to be healed.

The love of God led Brother Joel Mapamu of Kinshasa, Democratic Republic of the Congo (DRC), to leave his family and fly to Sankuru. His plan was to help, instruct, evangelize, and strengthen the faithful. By God’s grace he accomplished his mission and returned safely home. As a result of this mission, many people’s lives were changed. Here are some of their testimonies.

My parents divorced when I was five and I never had a religious education because my parents disliked praying. At the age of 13, I visited my older brother who lived in a larger village that had shops and restaurants. While I was there I began working with a chef at one of the restaurants and I decided to stay and learn the trade. Two years later I found a job as a chef in another restaurant and my wage increased. I bought a nice suit and showed it off to as many people as I could.

About that time, someone suggested that I go to an evangelistic campaign of the Seventh-day Adventist church in Longombo village. I met Brother Joel there. He preached the Word of God, but I was only interested in the opportunity to show off my new suit. One day, I heard something in Brother Joel’s message that got my attention. “God loves so much that He gave His Son to die for me personally.” I understood that I needed to meet God and that the only means to do so were to put my trust in Jesus Christ. I understood that there is but one God and one Mediator between God and man—Jesus Christ, who paid the ransom for us. This message was new to me because I had always believed that I could go to Heaven by grace and my own good deeds. But this message was the opposite: we are all unclean and our righteousness is like dirty rags. I continued to attend the meetings, but not for the purpose of displaying my suit! I wanted to know more about Jesus.

Brother Joel gave me a Bible and I began to read it every evening. I tried to put my life in order, but I sensed this wasn’t enough. I had to make the choice to go to Jesus. Since Brother Joel was going to leave in two days, I went to him for his advice. After a short discussion, the preacher showed me the Bible passage which described my condition as a sinner and the offer of salvation in Jesus. I confessed my sins and asked the Lord Jesus to be my Savior. Leaving that house, I wasn’t the same man as when I entered it. I came as a child of darkness and left as a child of God. I was baptized and now serve my Lord Jesus Christ. 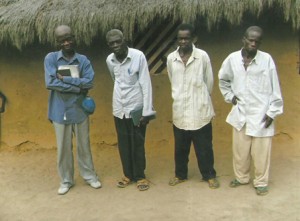 I am from the village of Tundo in Kole and I met Brother Joel in 2011. We talked about my life and He advised me to quit my bad life. In 2012, I met him again, and again he appealed to my heart, but it was hardened. I was in prison, a bad place to live. Too many inmates, nothing to eat, illnesses without medical assistance, and shame and rejection by family. I was a gang member who had attacked, killed, and robbed a man. I fled to my village, but when I came back to Kole I was caught by the police. While in prison I began to reflect on the missionary’s advice and I understood that I had to follow the Lord Jesus. I joined a prison Bible study group organized by the Seventh-day Adventists. I pretended to be one myself and studied the Bible every Thursday. When I came to understand that God would offer me pardon, my life began to change. I decided to tell the truth during the trial so that God would pardon me. My lawyer wanted me to lie and say I wasn’t a gang member, but I told the truth, even when he told me I would have to stay in prison for five years. God did forgive me and the authorities gave me a short prison term. Today I am a free man and I want to serve God in this church.

The Lord’s Work in the Villages

The Lord worked miracles in all the villages in which we preached the gospel. Both Adventists and non-Adventists invited us to visit them and share the Word of God and pray with them. Many people accepted Jesus Christ as their Lord and Redeemer. There were also several satanic attacks along the way. One day, I was preaching at Luseke village and as I began to pray for souls a satanic wind attacked me. I lost my voice and within five minutes the heavens turned black. This threat of rain made the people want to leave. But the devil should have known that the Lord Jesus won the battle on the cross. The brethren began to sing and my voice returned. It didn’t rain in that village, but in the next village there was a downpour. God protected me against the sorcerer and I finished the work. Sometimes I didn’t consume anything except for fruit juice for two days. The brethren were concerned about my health, but the work in rural places demands sacrifices of the mind and body. These areas harbor the old customs of people practicing sorcery. 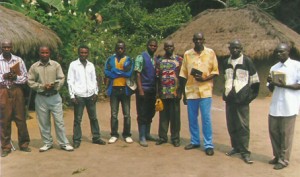 The brethren who survived the experience with the lion.

The Lord also spared us from being attacked by wild animals on the way to the village of Mvunge. The sandy road, the mountains, and the rain made our march difficult and we still had 15 kilometers to go. That is when we met a man on a bicycle. He told us about a lion who roams around and that it was dangerous to travel in the night. That lion had killed a schoolboy. We asked ourselves if we should continue, but the Spirit of God told me to go on. My companions were fearful. I was a stranger and didn’t know the way, but I prayed, “Lord, You sent me to Sankuru in order to do Your work and through Your power I ask You to rebuke all the bad spirits.” Just one kilometer before Mvunge we saw the lion and it saw us, too. The brethren of weak faith climbed the trees. Another lost control of his bladder because of fear. But the Lord anointed me and chased the fear away. I told the preachers who accompanied me that the lion would depart because the Lord was our protection. After a few moments the lion raged and ran into the forest. When we arrived in Mvunge, the people, who had heard the lion’s roar, shouted that the Adventists have a mighty God. This story was told on the local radio station in Lodja and many people came to the meetings and accepted Jesus as their Savior. Praise God!