“As a people we greatly need to humble our hearts before God, pleading His forgiveness for our neglect to fulfill the gospel commission. We have made large centers in a few places, leaving unworked many important cities. Let us now take up the work appointed us, and proclaim the message that is to arouse men and women to a sense of their danger. If every Seventh-day Adventist had done the work laid upon him, the number of believers would now be much larger than it is.” Testimonies for the Church, vol. 9, 25. “If our ministers realized how soon the inhabitants of the world are to be arraigned before the judgment seat of God, to answer for the deeds done in the body, how earnestly they would work together with God to present the truth! How untiringly they would labor to advance God’s cause in the world, proclaiming word and deed: ‘The end of all things is at hand.’ 1 Peter 4:7.” Testimonies for the Church, vol. 9, 149.

Because of the fast-fulfilling prophecies in the Bible, Sister Aiza Obeda, a newly-baptized member of our church here in Davao, admitted that we are now facing the last great final crisis. Aiza grew up in a Muslim family. As a girl, her parents raised her to be a good fighter for Islam. They eventually passed away due to poor health, and she married Roy Obeda, a backslidden Seventh-day Adventist. She tried to get Roy to accept her faith in Islam and he eventually did because he loved Aiza more than he loved God, even though he knew in his heart it was not the truth. He closed his eyes to Adventism and opened them to Islam. He decided to become a Muslim without first searching for truth.

Roy is a farmer and Aiza started a new small business to help sustain their needs. A year after they married, they had their first son. One day, our Bible worker named Brother Jacinto visited Roy’s house to distribute literature. Jacinto expected them to refuse and they told him that “Only the name ‘Allah’ could save.” Without further discussion, Jacinto returned home in sorrow over this experience. But he determined not to give up. He continued visiting and encouraging them, especially Roy because of his past religious history. But Roy hardened his heart like Pharaoh. One day, when his son became ill, Roy gave him some medicine to relieve his pain, but it continued and became severe. He cried for two days and his parents cried with him and prayed in the name of Allah for help, but their son did not improve. Jacinto came by to see if he could help, since he had experience as a medical missionary. He prayed and applied a simple remedy for pain relief and after 30 minutes, by God’s grace, the child’s pain disappeared.

After this, the parents lost their prejudice and they are now speaking of God’s promises. Our Savior touched the hearts of Roy and Aiza. Jacinto asked them if they were willing to hear the gospel through Bible study. At first, Aiza refused because she did not believe in the Bible. But before Jacinto could leave, he encouraged them to read Psalm 91 during the day and especially at night. But Aiza ignored him.

One month later, Roy had to leave town for work and was unable to return that night, leaving Aiza and their son alone at home. Aiza was afraid at night because the area where they lived was notorious for witchcraft. That evening, when she and her son went to bed, she heard a noise at her window and at her front door. She had never heard that noise before and it was terrible. It continued for half an hour. She was very afraid and held her son. She tried calling a friend but there was no answer, so she felt hopeless. It was then that she remembered Jacinto’s words of encouragement and how he had said that the Bible is one of the most powerful weapons to attack the enemy and comfort those in time of trouble. She found Roy’s old Bible and she began to read Psalm 91, louder and louder. In a few minutes, the noise disappeared and she felt that there was Someone who came to help her fight that terrible noise. 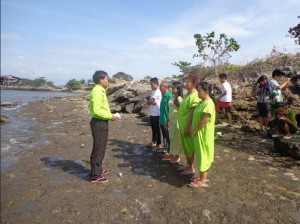 Edmar Vertudez, left, speaking to those about to be baptized.

In the morning, she told Jacinto what had happened and she agreed that the Bible is true and powerful in times of need. She decided to start Bible studies with Jacinto, based on her experience, and she was amazed to discover that the Bible is the Word of God and Jesus is the Son of God. She was amazed at the Sabbath, health reform, character reform, the state of the dead, and many other things. In a few days, during these Bible studies, she asked about the prophecy of Jesus Christ being the Messiah and Savior to those who are willing to come to Him. We studied with her about these things and that Jesus is coming soon to get His own. She wants to see Jesus when He comes and is longing for that blessed hope. A week later she began attending Sabbath worship service and has accepted Jesus Christ as her personal Savior through baptism. Now Aiza is no longer a Muslim but an active Seventh-day Adventist, together with her son. Roy is still not attending church on Sabbath because of his work, but Aiza continues to pray for him.

“We must persuade men everywhere to repent and flee from the wrath to come. They have souls to save or to lose. Let there be no indifference in this matter. The Lord calls for workers who are filled with an earnest, decided purpose. Tell the people to be instant in season and out of season. With the words of life upon your lips go forth to tell men and women that the end of all things is at hand.” Evangelism, 217.

By Edmar Vertudez. Support for the work in the Philippines can be sent to Mission Projects International, PO Box 59656, Renton, WA 98058.