Greetings from Senegal, and peace be unto you! We are heading into the rainy season. The days are becoming hotter and the power cuts are beginning. We are so thankful to the Lord for our solar system at the outpost because the frequent on/off of electricity that occurs can really damage appliances and equipment. The Lord is blessing abundantly and we see His hand in big and little things. God has been showing me the value of patience. Things have been going very slowly but they have been progressing. 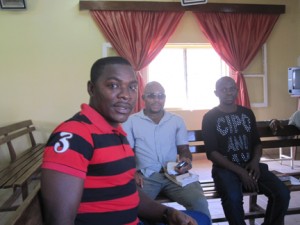 First of all, I would like to share some news. Christian Henry, a brother from Bethel, our English-speaking church, was imprisoned in early 2011 on a rape charge even though the victim said at the time that it was not him. In Senegal, you are considered guilty until proven innocent and the wheels of justice turn very slowly. Furthermore, if you are not Senegalese it can be problematic. It is even worse if you are from certain countries like Nigeria or Cameroon and Christian is Nigerian.

Members from the church consulted many lawyers to help get him released but to no avail. He was judged and sentenced to ten years. This sentence was appealed and court dates were given and postponed for over two years. It was a difficult time for everyone, especially for our dear brother Christian, but God moves in mysterious ways. While he was in jail, he began to share his faith and started requesting English Bibles for fellow inmates. The church gathered Bibles and other outreach materials and gave them to him. This difficult time in prison for Christian became a means of blessing the other prisoners.

The church kept praying for him Sabbath after Sabbath, year after year. Finally a date was given for a final judgment on his appeal and in 2014 he was freed. Praise God! Spending so many years in jail is hard but it is especially hard when one is innocent. However, it can also be a means of strengthening our faith and building our characters. This seems to be the case with Christian. He has said that before going to jail he was not so serious about his faith but during his imprisonment God opened his eyes and he began to understand the importance of reading the Bible and being close to God. While he was incarcerated, his brother Hope told me that Christian often advised him to read his Bible more. Please pray that God will continue to bless and keep Brother Christian. 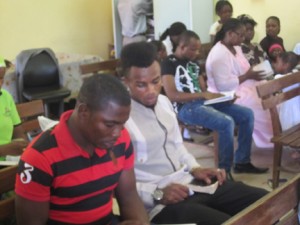 At the outpost we have also seen the bountiful hand of God. In 2012 we started to construct a building to use for newly converted church members and others but had some challenges to finish the bathroom and shower. Due to the generosity of faithful church members through Mission Projects International, we are well on the way to finishing the toilet, shower, and septic tank and have added a small kitchen.

Recently, Doudou, the mason who does all the construction for us, asked to borrow a Bible to read but also asked if he could keep it at my house. I immediately said yes to both requests. One day, though, I noticed that the Bible was not in its usual place and I realized that he had taken it. About ten years ago, he traveled to Switzerland to work and while there he attended the Adventist church with his host. He understands the message but has said that he could not risk converting. Please pray that God will nurture the seeds that are being sown so that he may make the right decision when the time comes.

We are also working on the plan of the neighborhood. After over a year of waiting, the water company is now ready to start laying the water pipes in our part of the village but there is no official plan showing the layout of the lots and roads. Neither the chef du village nor the communaute rurale (the local governmental authorities) have the will or the means to do this so Doudou and I are spearheading the effort to draw up a plan with help from the other villagers.

Just to give a little background, two years ago, I, along with a few neighbors, requested an estimate from the local private water company to have water pipes extended to our houses. The cost was 4.2 million West African francs or about $8,000 US. This is quite a bit of money and almost a year passed before any money was raised. In 2013, while visiting the annual agricultural fair, I ran across a SONES (the national water company) exhibit. I stopped and began talking to a gentleman who was manning the booth. It turned out that he was the chief of projects. I explained the situation and immediately he told me to apply for a subsidy. He told me to send him the estimate from the local water company because he would incorporate the quantities of materials into a project that SONES would be doing in the area.

Later, while talking with one of the locals, I found out that the individual I spoke with had been responsible for bringing water service to a nearby village and was considered a man of his word. This information cheered me immensely because so often people in responsible positions make promises and do not follow through. After sending the estimate, I called him from time to time and each time he would answer and give me an update on the progress of the project. Now, a little over a year later, SONES and the local water company representatives have come to the village to decide where to put the pipes. But before the work starts we must provide them with the layout of the neighborhood. So pray that these agencies will accept our work and we will not be required to hire a surveyor.

Things are coming along at the farm. A few of the mango trees we planted have fruit on them for the first time, as well as the soursop tree. I am so happy about that! When the water comes, it will make life a lot easier. We currently have to buy water and have it delivered. The cost is very high and limits what we can do. We have been studying to determine which crops do well in the area and we have been improving the soil through composting. We are still investigating methods of conserving food and have been drying onions and garlic to make an herbal seasoning that we intend to market to replace Jumbo, an MSG-laden bouillon cube.

More help will be coming soon: an experienced gospel outreach worker named Providence has agreed to come and help us with house-to-house work in the village. She will come during Ramadan when people’s minds are open to spiritual things. We look forward to working with Providence and pray that her efforts will be blessed.

The work goes slowly but God is blessing. God is strengthening our faith and developing our patience. We thank you for your prayers and encouragement. May God bless and keep you all!

By Deborah Ndione. Email: senegalhealthproject@live.com. Support for this work can be sent through Mission Projects International, PO Box 59656, Renton, WA 98058.