Descending in the small plane, I worried about the kind of reception I might meet on the ground. Only three days previously, a group of rebels had taken control of the airport in this small, lovely city of Kindu, in the heart of the Democratic Republic of the Congo (DRC). As I thought of this, fears grew inside me. After a short prayer, I thought, “Why do I normally trust God to handle smaller issues of my life, but doubt His ability to take care of my big problems, like this frightening situation? God has brought me this far and He won’t let me down now.” This thought strengthened my faith. It took two hours and forty minutes to reach Kindu from Kinshasa, the capital city. Knowing the history of plane crashes in this country, all the passengers applauded in thanks to God when we landed safely!

My mission in Kindu was to train lay members on how to share the gospel and how to revive churches. When I traveled from the airport to the city my fears calmed when I saw soldiers on every corner, stationed strategically to ensure security. The city residents were calm. Pastor Rashid Muyenga, the mission president, had rented a house in a very safe area of the city and all fears were forgotten as I began training the 27 enthusiastic lay workers. 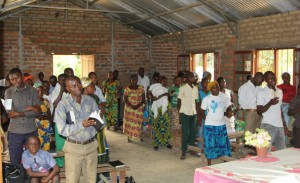 The two million people of the province of Maniema need Jesus. Maniema is situated almost in the middle of this vast country. Transportation is difficult and access to the capital city of Kindu is very limited. Congo Frontline Missions (CFM) has only 12 pastors. There are 400 Seventh-day Adventists in the city, but there are more Muslims in Kindu than almost any other part of the country.

Pastor Robert Muhune, the union president, pleaded with CFM to go to Kindu and start the work. After much prayer, the CFM team agreed and arranged the trip. Of the 27 lay workers who were thoroughly trained to work for Jesus, six were chosen as church planters and were assigned to six new areas. New church planters are typically equipped with tools such as Bibles, bicycles, portable speaker systems, tracts, and books. Their first responsibility is to go from house to house sowing seeds. When the harvest is ready, an evangelistic series follows, and then a church building is built. When the members are well-grounded they are organized as a new church and the church planter is moved to another dark place to begin again.

While this is a good beginning, Maniema needs more than six church planters. Kindu alone has a population of over 200,000. This province also needs the monetary resources to better establish the work of God. Please pray with us that God will open the way to train and hire more lay workers with tools for the work. We desperately need Bibles, books, portable speaker systems, and many other things. Donations are highly appreciated. 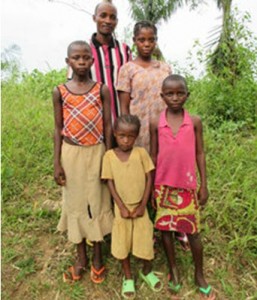 Senga-Jean and Rosie, with their family.

Senga-Jean Nebandrombi was a diligent Bible worker, having been born and raised a Seventh-day Adventist. A strong, natural leader, Senga-Jean rose quickly through the ranks at his local church, serving as a deacon and later as head elder. In 2011, the church decided to send him for more training at the CFM training school, knowing his leadership skills would be served in an even greater capacity as a Bible evangelist. Then, in 2013, tragedy struck. Senga-Jean’s young wife and mother of his children, died in childbirth. And, in spite of all the efforts, the premature baby boy also passed away. Heartbroken and saddened by the loss of both his little boy and his faithful wife and companion, Senga-Jean took comfort in his faith and in God.

After a period of grieving, the family of his deceased wife asked Senga-Jean if he would marry her younger sister so that his children would have a mother and he would have a support system to move forward with his life and ministry. This is traditional in Congolese culture. Senga-Jean accepted the offer and in December 2013 he and Rosie were married. Rosie says she feels “blessed to be able to take care of her sister’s children and carry on the work of God.” Currently, the couple has started serving at a brand new church plant in the area known as Alebuku.

Even though their family tragedy is past, Senga-Jean and Rosie still face many obstacles in continuing their life and mission. Recently, CFM hosted a Bible worker training week at the mission compound. The trip to the training seminars was fraught with challenges for Senga-Jean and Rosie as their journey took six days: four days by bicycle and another two days by car. Both of them contracted malaria during the trip. Thankfully, they were able to buy medication and they continued to press on, despite sore joints and aching muscles. They praise God for giving them the strength. Truly, the Congo is a difficult mission field in which to work, but the rewards are out of this world! Please pray for this new family serving God out on the frontlines.

Kibibi church is a perfect example of how the fires of the gospel are started by following the methods of Jesus. Within three short years from its inception, the church is thriving. CFM sent the family of Mikendi Apachakua to Kibibi. Apachakua was one of the most promising students in our lay training school, excelling in public and personal evangelism. Like Matthew in the Bible, Apachakua left behind his work as a road engineer and joined the ministry. However, his first days were not easy. After settling into Kibibi, where there were no church members, he worshiped with his family in a small hut in the center of town. The other residents thought these people, who could be heard worshipping in their little home, were very strange. But this godly family was undaunted by the stares and remarks of others. They came to Kibibi to share God’s love and truths of the scriptures and, over time, some of the neighbors were convicted by the Holy Spirit to join them in worship.

When the field was ready for harvest, CFM prepared to conduct an evangelistic series. Students from the evangelism school went from house to house sharing the Bible with people. The truths of God’s Word were new and strange to these spirit worshipers who were terrorized by witchcraft. Soon opposition grew from those who wanted nothing to do with Christianity. They began to spread confusion and made a police report. However, the wise police decided to come listen for themselves. They were astonished when they realized that the preacher was reading from the Bible. These new truths could not be denied. They discussed it with the chief of police and saw no reason to stop the meetings. Thirty-eight people were baptized and a new company of believers began to worship each Sabbath.

Today, Kibibi is an organized church with more than 60 members. We thank God for Mikendi Apachakua and his family who were willing to work for the Lord in this dark region. Kibibi was among 15 new churches started by CFM in the Oriental Province in a single year. Today, there are more than 60 new churches started by CFM church planters beyond this area. Please pray that the gospel fires will continue to expand into the other provinces, as well. We thank God for taking care of His work in the Congo.