We had been waiting for a shipment of literature and it finally arrived! Barac, my husband, picked them up two weeks ago from the Port of Guayaquil. Brother Jorge Mera, husband of Nury Mera, brought his car and trailer to help Barac transport the boxes. It was a big surprise to see the Mera family’s motivation and excitement in their desire to help with this cause. We were hoping for help from other brethren, but that help never came. The Mera family have committed themselves to assist with the distribution of the literature in Guayaquil. The books will be passed to all the judges, the mayor, and to other high-ranking government officials. The Meras also want to help in other cities, and they have also told us that they are not only willing to assist in this project, but want to do much more work to spread the gospel message. This is a great relief for us. We thank God for their spirit of dedication and helpfulness, which helps us with our own motivation. 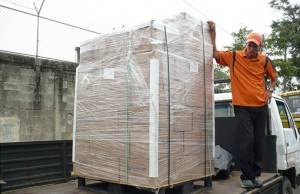 Unloading the pallet of literature.

Recently, Barac went to our local Pichincha Municipality, where he distributed many Great Controversy books and health magazines. We will probably run short of materials, since everyone wants one, and it is so hard to tell them there are only a few for certain selected people.

“We are to give the last warning of God to men, and what should be our earnestness in studying the Bible, and our zeal in spreading the light! Let every soul who has received the divine illumination seek to impart it. Let the workers go from house to house, opening the Bible to the people, circulating the publications, telling others of the light that has blessed their own souls. Let literature be distributed judiciously, on the trains, in the street, on the great ships that ply the sea, and through the mails.” Gospel Workers, 353. 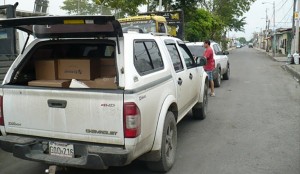 I want to share a testimony with you. Our shipment was stuck in customs and the custom agent, Mr. Cuevas, was taking his time. Or, more accurately, he was not showing any interest in our shipment at all, and days were passing by. Each day incurred additional warehousing charges. A couple weeks ago the books were supposedly clearing customs. Barac was going to travel to Guayaquil to pick them up. But Mr. Cuevas would call or text us, stating that the shipment would be ready “tomorrow.” And then the next day the same thing would happen again. So Barac texted him back and told him that in delaying and incurring unnecessary storage charges, he was misappropriating the Lord’s money and resources which were meant for this free cause of literature distribution. Barac told him what we planned to do with the books and explained a bit about the content of The Great Controversy and the health magazines. He told the agent that the books had been donated by many concerned brethren who wanted to help the Ecuadorian people. He asked Mr. Cuevas to think about all these things. All that week, we gave special prayers for the liberation of the books.

“I am instructed to point our ministers to the unworked cities, and to urge them by every possible means to open the way for the presentation of the truth. In some of the cities where the message of the second coming of the Lord was first given, we are compelled to take up the work as if it were a new field. How much longer will these barren fields, these unworked cities, be passed by? Without delay, the sowing of the seed should begin in many, many places.” Gospel Workers, 353. 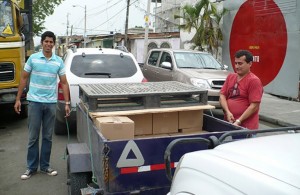 Loading the trailer with Brother Mera on the right.

We did not hear back from him before the weekend came and went. Then, on Monday afternoon, Mr. Cuevas called us and said we could pick the books up the next morning. The agent was not present at the port the next day, but he had arranged for his assistant Eduardo to be there to meet my husband and to sign the paperwork and finish the process. Eduardo was friendly and he told Barac that Mr. Cuevas was a procrastinator, among other things. But Eduardo said that Mr. Cuevas himself would email us with all the final paperwork, charges, and other details. 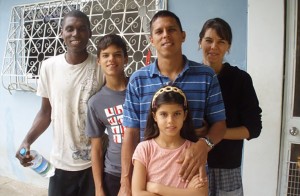 Barac arrived back home with a little more than half the books. The rest remained with the Mera family. Our children have been stamping the books and magazines with the address of our ministry: Pra del Tor Ecuador. Later, Mr. Cuevas called us to inquire if we had arrived safely back home with the books and then he told us we did not owe him anything more. Barac then asked him if we owed warehouse charges, but Mr. Cuevas said, “Don’t worry for anything. Please pardon my delay. May God help you in the work you are doing, and please don’t forget the book you promised to bring me.” Wow! Glory to God! Barac has to travel to Guayaquil soon, and when he does he plans to meet and visit with Mr. Cuevas and give him a copy of The Great Controversy, as well as a few of God’s gifts from our farm, such as papayas and bananas.

“Church members, awake to the importance of the circulation of our literature, and devote more time to this work. Place in the homes of the people papers, tracts, and books that will preach the gospel in its several lines. There is no time to be lost. Let many give themselves willingly and unselfishly to the canvassing work, and thus help to sound a warning that is greatly needed. When the church takes up her appointed work, she will go forth ‘fair as the moon, clear as the sun, and terrible as an army with banners.’” Christian Service, 147.