What would cause someone to risk everything and plant his seventh home-church in a communist country?

My family and I lived comfortably on the coast of Vietnam until one day government officials came to our home with an official letter. “We have to leave right away!” my father said after reading it. Later I found out the government thought our family, along with a few others, was a threat and had ordered us to move to a remote mountainous part of Vietnam. We quickly packed up a few of our belongings and headed out to make a new home. We had no choice. 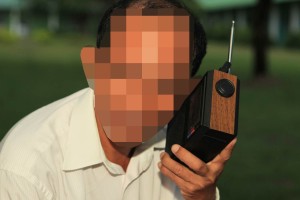 The author listening to the Peace and Happiness radio program.

As a teenager, I questioned God and angrily asked, “Why would a God of love allow this terrible thing to happen to us?” I felt so alone. I remember when I would wake up terrified in the middle of the night from the sounds from the jungle and I would see my father praying. He woke up early every morning to open the Word of God and read. So one day I opened his Bible and read these words: “All things work together for the good of those who love God and are called according to His purpose.” Romans 8:28. This helped the bitterness and discontent in my heart leave. This made life in the jungle less difficult!

One day, I came across a radio station called Peace and Happiness. The whole family crowded around and listened to the preacher, Pastor Isah Young, explain the Word of God. It brought hope to our hearts. We no longer felt alone in that bamboo hut way in the jungle. We started keeping the Sabbath and following all the truths that were so clearly explained to us. I felt my family draw extremely close to God during that time.

News came that my grandpa’s health was failing. My parents sent me back to the coast to care for him. While there, I got married and had a baby boy. I then got word that my father was very ill, so I left my wife and newborn and headed to the jungle home to see him. I got back home before my father passed away. He weakly gathered all of the family around him. I saw a peace covering his face. He shared how he was in prayer and he felt a beam of light on him so bright that it caused him to open his eyes and look for the source. All surrounding him was a circle of light and he was wondering what was happening because he was indoors. After about two minutes the light disappeared. My father had tears in his eyes as he shared this experience. He said, “Our family is so blessed, so blessed!” Then he asked me, “Please contact Pastor Isah Young. His teachings are very biblical.” One week later my father passed away.

I had no way to contact Pastor Isah Young but about a month after my father passed away, a Sunday pastor came and spoke with us. Having a preacher come was so rare that about 30 of us gathered together to hear his message. During his appeal, I raised my hand. I felt God’s call to serve Him. I did not know how this would happen, but I followed my father’s footsteps and spent much time in the Word of God and in prayer. I knew He would lead me. 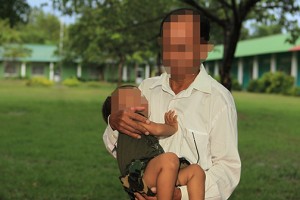 I was too poor to pay for my wife and six-month-old son to come join me but I trusted the Lord. One night I had a dream where I saw myself fishing for a living. But then I was surrounded with lots of outreach materials and God led me to a tribal village. In my dream, they accepted Christ. When I woke up from the dream, my wife and son were standing at the door. She had made it home! It amazed me that she made it to our jungle home. These two events confirmed that God planned for us to stay there and serve Him.

I set out to a neighboring village that did not know God. Twelve people gathered to hear what I had to say. I shared with them about the Almighty God, the God of Love, and the God of Holiness that has power to create. I shared how this God does not tolerate sin. And though He is righteousness, He made a way for us sinful people to be with Him through His Son, Jesus. I shared my testimony about how God saved me.

At the end of my sermon, a man named Manh Chumh came up to me and said, “If there really is a God like you describe, look! How come my mother is going to lose her sight and my three-year-old son is covered with boils and in terrible pain?” I was strong in my faith and I lifted up the child in my hands and I prayed for him and also prayed for the mother. I told him, “These trials may be to bring God glory.” One week later I came back to visit Manh Chumh’s family. The first person to greet me was his mother. They both greeted me with big smiles. “You prayed to your God and He healed my mother, and my son too!” Manh Chumh exclaimed. A little boy ran into the house and I grabbed him up and felt his skin, as smooth as silk.

I continued to witness about the power and love of God and as I shared, more and more people from the village came. After I finished talking, I had an appeal and all 26 people attending knelt down and accepted the Lord into their hearts. The group kept growing and two weeks after this visit I had to come back and organize a church.

In 2010, a friend of mine from another province called me. During our conversation I told him I really wanted to contact a preacher, Pastor Isah Young. “Do you know of him and his Peace and Happiness radio program?” I asked. “I have contacted him a few times already,” my friend said. He put me in touch with Pastor Isah Young and we had a good conversation. He said he would send a Seventh-day Adventist pastor to visit me. To make a long story short, I now work as an Adventist Southeast Asia Projects (ASAP) lay pastor and am planting my seventh church this year. I often face difficulties with the government officials but I always stay in the Word of God and pray, just like my father did. God is my light.

Please pray for the persecuted. “Dear Jesus, please show your love and light to the persecuted and the oppressed in Vietnam and other closed countries. May I remember to lift them up daily. Amen.”

“Then Jesus spoke to them again, saying, ‘I am the light of the world. He who follows Me shall not walk in darkness, but have the light of life.’ ” John 8:12.

By Kang Do.* For more information about Adventist Southeast Asia Projects (ASAP): www.asapministries.org.

*Name has been changed and photos blurred for the safety of God’s workers.