Last Sunday I was up at 4:30 am to get in some study time, because in an hour it would be my turn to help prepare breakfast in the kitchen. Directly after breakfast, I had a group of colporteurs to keep occupied until mid-afternoon. I did not relish the thought of packing books around all day under the hot sun, especially after already laboring for two hours over the cooking fire. By the time the water boiled, I had half-decided that we would stay on campus. I would have the kids work on their door presentations, which they still needed to memorize anyway. On the other hand, I knew the kids could use some practice in the field. I only have a few more Sundays here with them this year before I have to leave, so I need to take advantage of the time we have. 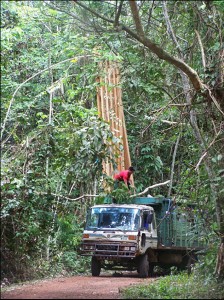 Getting the trusses to the main road.

But then I heard there were drunken festivities in Yata, our chosen territory for the day. Oh great, I thought. That is the last thing we need! I could already picture potentially awkward and even dangerous scenarios. That settles it. We’ll definitely stay here today! I was happy for what seemed like a completely legitimate excuse. But suddenly I was strongly impressed with the selfishness of my decision. Don’t those people need God just as much even if they’re drunk? My thoughts now took on a different tone. You know the holy angels are with you! You have nothing to fear!

So we went out and ended up talking to drunk people in three different houses. At the first house, a young man invited us inside. He had obviously been drinking, but he listened to us respectfully and was able to respond with a semblance of intelligence. Meanwhile, a toddler played on the dirt floor, occasionally looking up with wide, startled eyes. The man expressed interest in our materials, but said he had no money, so we prayed with him and gave him a pamphlet. After we left, Gina, the student I was working with, was teary-eyed.

“It is so different out here than it is in the internado [boarding school]!”

“What do you mean?” I was surprised at her emotion.

“Being in that house brought back bad memories.” She paused, and I waited for her to see if she would say more. “I am so glad I am at the internado! I am so glad God brought me here! I was thinking about leaving, but I don’t want to anymore. I want to stay here for all four years of high school! That man back there reminded me of my dad,” she added.

As we continued down the street to the next house, I tried to encourage her as my heart overflowed with joy to see the working of the Holy Spirit. Thank God! Even if Gina’s epiphany turns out to be the only reward for the day’s labors it will be worth it! 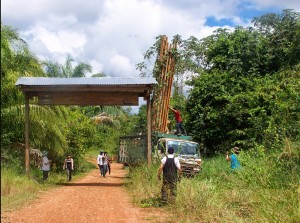 At the next house, the ubiquitous heavy rhythms from a conglomeration of raucous party music thumped in the background.

“This music is awful!” Gina continued. “It brings back bad memories. I’d rather be at the school singing hymns!”

At the next house, two young inebriates sobered visibly as I presented to them some DVDs about the great controversy. They bought the whole set on the spot, and I could hear them playing it already as we walked to the third house where we sold Steps to Christ and Bible Readings for the Home to a very interested elderly woman while we also humored the conversation of her drunken brother.

Today we went back to Yata and sold nearly $100 worth of material in a couple hours of time. That is big spending for the little town of Yata, where previous efforts never netted much more than about a tenth of that amount. Even more surprising was the level of interest in nearly every home. I’ve never seen anything like it here before! Even those who were unable to purchase anything listened intently to our presentation and expressed a desire to acquire our materials. Praise God for His sobering Holy Spirit that is counteracting the foul inebriating spirits that have so long held this village captive! 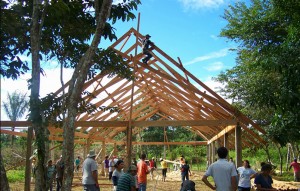 For years now I have been frustrated at what seems to me such slow progress of the gospel in Yata, including our delayed church construction project. But next month, the church will finally have a roof! A sawmill was built in Yata just last year, and it began operation a few months ago. The new mayor, Richard Cordero, has four of his kids in our school, and has promised to speak to the mill owner and secure us a discount on the lumber we’ll need for the roof. Another factor not to be ignored in all this is the flooding we’ve had this year all across the northeastern part of the country. I think God is using it to make people reflect. If a life’s worth of work and savings scan be swept away in moments, maybe it’s time to look for something sure and more lasting. Combine all that with this suddenly-heightened level of spiritual interest. Conicidence? I don’t think so. God always has His timing!

What a blessing it has been to be here helping the school year get off to a good start. We just had a short-term volunteer group here for a week to help put the roof on the church in Yata. That was some hard, fun work, and we are thrilled that we will soon be able to hold worship services right in Yata. There was a baptism this week and nine of our students and three adults from Yata, including the mayor, gave their lives to God!

“The timing of things may tell much in favor of truth. Victories are frequently lost through delays. There will be crises in this cause. Prompt and decisive action at the right time will gain glorious triumphs, while delay and neglect will result in great failures and positive dishonor to God. Rapid movements at the critical moment often disarm the enemy, and he is disappointed and vanquished, for he had expected time to lay plans and work by artifice.” Gospel Workers, 1915, 134.