Working for Healing of Souls

Greetings, grace, and peace to you! We are a small group of brethren living in Nicaragua who are dedicated to the work of proclaiming the Three Angels´ Messages of Revelation 14:6-12. Our group is called “El Tercer Pregonero” which means “The Third Town Crier.”We are located in a town called Niquinohomo, next to Granada, and at the moment we are very devoted to the work in the communities of Las Crucitas and Matagoyavo. 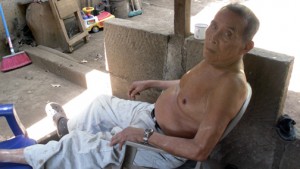 Brother Juan Ramón is from Las Crucitas. Brother Moses Albarez met him while preaching the gospel. Juan Ramón is an old peasant who has dedicated his life to hard agricultural work. After being a faithful Catholic, Juan Ramón accepted the Seventh-day Adventist faith about four years ago, but he’s just started to live the faith. He has taken part in The Third Town Crier group and Brother Jhonny Rosales would visit with him to share the great gospel message. Due to Juan Ramón’s condition, Jhonny is permanently attending to him to help his physical and spiritual life.

Last year, Juan was diagnosed with diabetes and, unfortunately, a few months later he injured his left foot while working in the fields. In the beginning it was just a small open wound, but because of his diabetes, it quickly enlarged. Even though he was applying creams and taking medication, the wound never healed but continued to worsen. From then on he suffered a lot. About four months ago, not knowing what more he could do, he appealed to the hospital for help. The only thing they could offer was amputation of his left big toe because it was already all black and oozing pus and blood. The doctors told him that if he didn’t cut it off he could lose his foot, and even worse, his leg. So, in despair, he agreed to have them amputate his toe. But even after it was removed, the trouble persisted because the wound still did not close, due to the diabetes.

Poultices are one of the natural therapies used to heal the wound. 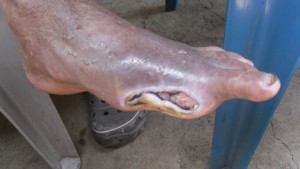 The wound after three weeks of therapy. 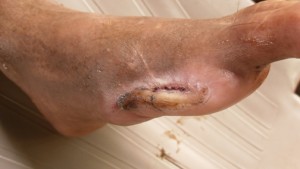 One Sabbath, about two months ago, Juan Ramón and his wife came to meet with The Third Town Crier group, seeking God’s healing. His wife asked for a prayer to be made in behalf of him. When the Sabbath services concluded, Jhonny went to see him and asked if he could see his wound up close. When he saw it he said, “Your healing will not come only with prayer but you need to act immediately.” He told him that he would visit him the day after, on Sunday. And from this time on, Jhonny frequently visited Juan Ramón to attend to him. He has helped him with natural therapies and remedies, using poultices of charcoal, noni, and clay. He taught him how to eat a better diet and gave him herbs to help control his diabetes and to clean his blood. Unfortunately, Jhonny didn’t take pictures from the beginning when the treatments began, but he took them near the end when we can see the good results. But as the Bible says, “Better is the end of a thing than the beginning thereof”! Ecclesiastes 7:8.

Brother Juan Ramón thanks God for the natural remedies, for a healthy diet, and for bringing The Third Town Crier group into his life where he feels like part of a family. His fellowship with Moses and Jhonny, who have helped him in his healing process, has been a special blessing. All this helped him to grow in faith. At the moment, he delights to see God’s marvelous ways, and he is sharing with everyone he meets his knowledge of our good God and the great things He has done for him. He magnifies His law. We hope that he’ll keep moving forward, even after his complete healing, not forgetting what God has done for him.

“There is a great work to be done. How shall we reveal Christ? I know of no better way…than to take hold of the medical missionary work in connection with the ministry. Wherever you go, there begin to work. Take an interest in those around you who need help and light. You may stand and preach to those here who know the truth; you may preach sermon after sermon to them, but they do not appreciate it. Why? Because they are inactive.” Medical Ministry, 319. 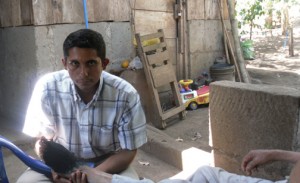 God is giving us the opportunity in our little group to prepare ourselves and to prepare others to be able to stand firm in the platform of truth. This group already existed with its few members since 2012, but little by little our congregation is increasing in number, and since the beginning of the year we have been able to be a bit more organized and more active in the work. We have already had two campaigns in the community of Matagoyavo.

Yet we still have only two Bible workers: Moses and Jhonny. That limits us, even though they do a great work during the week, visiting the sick, helping the poor, and sharing the Word of God.

Brother Moses gives Bible studies every Sunday, Tuesday, and Friday. We have just started our plan of true education with agriculture and we hope to soon build our own church in the community of Las Crucitas. Our main purpose is to reach as many souls as we can, to free them from the bondage of sin. And once we have built the church we believe that we will be able to do much more.

Our future projects include a health program with natural remedies, and to provide healthcare to the community as the medical missionaries that we are. But if there is no balm in Gilead, nor physician, how can they be healed? Jeremiah 8:22. Once we give them that opportunity, why then would they not recover? “Heal the sick, cleanse the lepers, raise the dead, cast out devils: freely ye have received, freely give.” Matthew 10:8.