God Brought Us to This Place

Sunday afternoon, we pulled out for our long trip into the jungles of Ecuador, loaded with 21 boxes of Great Controversy and Radiant Living magazines. We had spent the weekend stamping all the books and magazines with our email address and phone number. 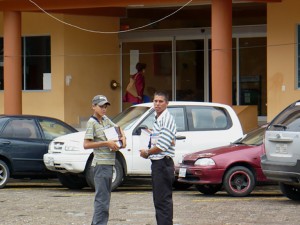 Our plan was to start the next morning at Quito, the capital of Ecuador, and distribute to all the government offices, the court of justice, and the presidential palace. We arrived around 8:00 am and went immediately to work in the central park, which is surrounded by all the government offices, the Catholic church, and the presidential palace. It is very interesting for us to note that in every city and town we’ve visited, there is always a large cathedral and archdiocese beside the government buildings or mayor’s office. Kind of proves who is really in charge. 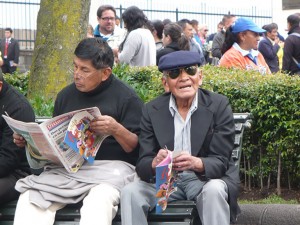 People who took our literature.

The elevation of Quito is about 9,350 feet, so after carrying a few loads of heavy boxes up and down the steep cobblestone streets, we were panting heavily. The people’s reception of the books was very surprising, since we expected a lot more refusals in the capital city. A couple times security guards stepped in and defended my husband against an angry official that thought he was selling the materials. They even helped him finish passing out the rest of the books, encouraging all their fellow employees to take one. The majority of the government employees were all happy for the books and wanted to know to whom they owed their thanks. We told them to give their gratitude to God because He is the one that had provided this material and impressed the hearts of faithful brothers and sisters in different parts of the world to donate funds with which to distribute it. 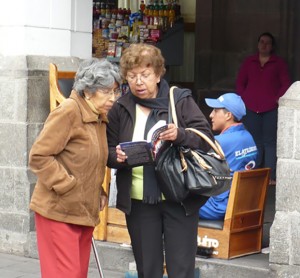 God's gospel message went out to hundreds that day.

It happened to be the day for the changing of the presidential guard and by 11:00 am the park was packed to overflowing. Since we had finished all the government functionaries, we started handing the books out on the corner of the plaza. They went like hotcakes. People would stop and wait for 10-15 minutes until a new load of books had been fetched from our vehicle, and then fight over them until they were all gone.

We left Quito for the Amazonia (jungle area) after lunch. We left at least 5-6 books in all the little towns that we went through that had municipal offices or a mayor. The people in the large cities of El Coca, Tena, Lago Agrio, and Macas gave us a very good reception. They were a little more reserved at first and more often would only stare at us when we handed them a book. After telling them it was free, and that there were lots more for whoever wanted one, they would finally reach out and take the book. It’s like they couldn’t believe that someone had walked into their office out of nowhere and plunked a free book down on their desk, and was standing there smiling and saying, “God bless you.” But once they got the message, they were all smiles and patted us on the back, shaking our hands over and over. As we loaded into the car, they crowded to the windows overlooking the parking lot and waved goodbye. 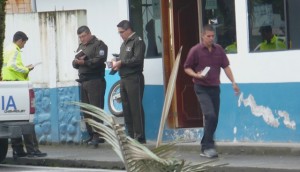 Guards even helped to distribute the books.

Our 13-year-old son Caleb went into an office where a man called to him, “Hey flaco (skinny), I have a question for you.” Caleb turned and nodded his head. “Tell me,” said the man, “have you read this book yourself?” “Of course,” responded Caleb, “that is why I am helping to distribute it. It is an awesome book.” The man grinned back and said, “Then give me a short explanation of what it is about, so I can know whether I want to read it or not.” 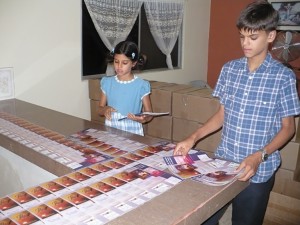 “Well, it’s the history of God’s church from the time that Jesus returned to heaven after his resurrection, until his second coming in glory to take His children to the mansions He has prepared for them. It tells us what is happening right now in the world and what will happen in the near future. Believe me, you don’t want to miss out, especially the part about the earth made new!” As Caleb shook his hand and turned to leave, the man called out, “Thank you, flaco, I will read it!” 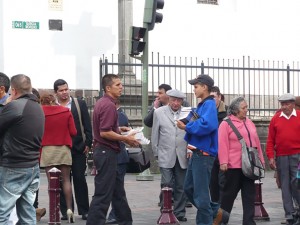 Handing out books in Quito.

Another experience I had was with an older woman that was struggling up the road from the market with a load of vegetables and some heavy grocery bags. I hesitated to hand her a book, because I wondered where she would put it, but she looked at me and smiled and so I stepped closer and told her that I wanted to give her a book. Her eyes widened and she immediately put all her bags down on the road and stepped up close to me. Her head was about even with my chest. She asked who sent me to give out these books. Was it the president? I smiled and told her that the King of Kings had provided this book for her because He wanted her to know what was going to happen very soon so that she could get ready, and that by looking back through history she would see how God has protected His true people and stood by their side through trials and persecution. I was going to say more, but she cut me short by grabbing me around the waist and hugging me and then reaching up and patting my cheek. She said that she was so happy that God had brought us to this place and had remembered her needs by providing the wonderful information in this book. She warned us to be careful, because the devil would use many people to come against us in this work. She had tears in her eyes when she finally said goodbye and struggled up the road with her heavy load. The Great Controversy was tucked safely underneath her sweater. 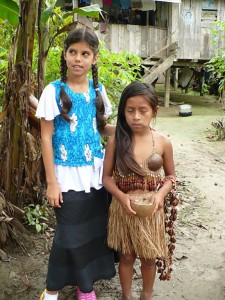 Rebekah makes friends with a girl from the Kichwa tribe.

There were many more wonderful experiences that we had on this trip. One of them was the privilege we had to visit a number of remote Indian tribes in the Amazon basin. The majority are only accessible by boat or motor launch. We visited the Shuars and the Kichwa and both tribes begged us to return and teach them how to make a living with their hands. They have tried to isolate their tribes from civilization as much as possible and all the corruption that comes with it. They want their children to keep their customs and language, and all the benefits that the government is offering them seem to them as something that will contaminate their children with the Western culture. We promised to teach them how to repair their own boat engines, do masonry work, make Drain Cleaning bathrooms, and cut hair, etc. We believe that the Lord impressed them to open the door to us, because we showed interest in helping them for nothing in exchange. We are praying for the possibility to go back and work with them. The problem is that it is more than 14 hours non-stop driving to get to near their villages and right now there are heavy rains in that area.

We want to especially thank our brethren for their donations, and most of all their prayers, which have provided a way for us to touch the major cities of Ecuador with the Great Controversy and health magazines. Of course, much more material is needed to reach out to more people, but we will have to wait on the Lord to provide in His time. God bless! Maranatha!