We recently had a wonderful day on the streets. People were more relaxed because it was a Sunday, not a regular business day. We passed out an exceptional amount of literature, I think we handed out more than 5,000 pamphlets. 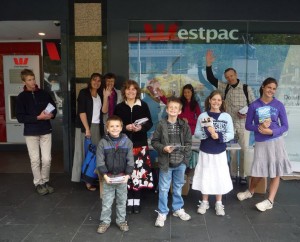 A diverse group passing out pamphlets.

Our group of volunteers that day was large and diverse. It was amazing to see the effort of the kids, including nine-year-old Matthew, handing out an enormous amount of literature. What a blessing to have kids eagerly working for the Lord! Wendy Hill, our Highwood guest representative, also came with us. She became a Seventh-day Adventist a few years ago after being a guest at Highwood. She now works with us from home, talking to people who are interested in attending our health programs.

That day on the streets, as she was standing with the kids at the table, a lady walked up and started to talk to one of the children. I was there, picking up more literature, and got to talk to her. She was a Christian (charismatic) and a vegan. She was very interested in getting to know other Christians who were vegans, and when she heard about the health retreat she wanted more information. I passed her right on to Wendy, and the two of them talked for a very long time—not only about the health retreat, but about many important things. We hope this lady will become a guest at Highwood one day. It was so nice to see how God blessed Wendy’s first day with us on the streets and used her in a mighty way! 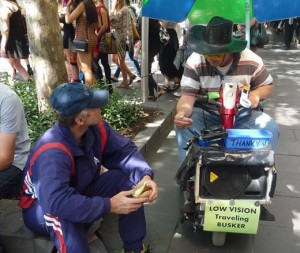 Talking to a street singer who took our literature.

Sunday was a very special day for me as well. I met up with my new friend from the fashion shop, and I now communicate with her practically every day. We spent three hours together on that Sunday—talking, praying and studying God’s word. She is very attentive and hungry for the truth. I presented the Ten Commandments as a wall of protection, love, and care that God has given us, and she was very interested to know more. We also talked about how the Catholic Church changed the commandments and the Sabbath. She soaked in what she heard, and did not resist. We also keep talking about the most important, central issue in being a Christian: surrender of self to God. At a certain point she asked me: “Could you pray a prayer of surrender with me?” I did and she said “AMEN!” We had such a wonderful time, and while we were sitting there so much was happening! 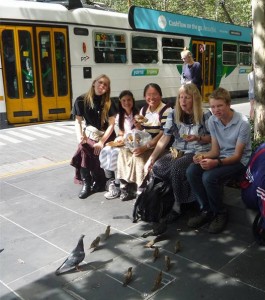 Having a lunch break while passing out literature.

Then a man came up to us. He asked for two dollars for the tram. I felt it was right to give it to him, and was so happy I did. It turned out to be a very wonderful conversation. He opened up to me and my new friend and told about his sad life story. As a child he had been sold into the sex industry and now he was a gay. But he said he had been celibate for the last four years, and he wanted direction in life. He believed in God, and at a point he asked what church I was from. When I said Seventh-day Adventist, his face lit up and he replied, “I was once baptized in that church!” Together with my new friend, we prayed for and with him. It was so amazing! My new friend from the fashion shop could just sit there and see how God led people to us—just as He had led me to her just a few days before!

We continued to talk and after a short while some people from our group came up to us. One of them had talked to a man who, after a long talk, sowing a lot of doubts, had proclaimed himself to be “a fallen angel.” He had said he wanted to curse my friend but that her heart was so nice he felt he should not! What a great controversy! She just felt like praying with me, and so the little group of them, my newfound friend, and I had prayer together again.

We continued to study, and behind us a lady—a total stranger—came up to us and said, “You are reading a very good book!” She was referring to the Bible. God sent so many confirmations that day for my new friend to grow in her faith! I was so very blessed, too! 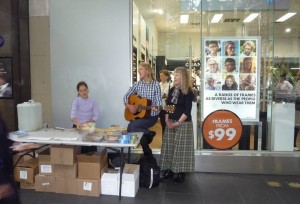 Singing at the literature table.

Many of the other team members had great experiences as well. One man had taken a pamphlet and then went to a restaurant to eat. He read it while eating and then went back and told our team member he had appreciated what he read. Another two Christian ladies were doing a little survey and wanted to ask Lesley some questions. They had a good talk and took literature to read. Tony also got the chance to tell a man about the Sabbath. It was just so nice to see them eagerly telling one story after another, as we met for a testimony meeting that night. So much happened in only a few hours!

My dad also had very nice experiences yesterday. There is a man who stands outside one of the restaurants handing out flyers. He had many religious questions for Dad, and especially wanted to know more about Jesus. They talked for about half an hour, and have agreed to meet again on Thursday. Dad also had an interesting discussion with a man he was walking with and also with some young people outside the library.

Another sister was with us on the streets for the first time—Irisdene from the United States. She had wonderful experiences as well, especially with a certain young lady. This young lady told her she had not felt loved, even though she was married, and she had suffered a lot. One day she decided to take her life, but she was rescued. In the hospital, she had a very special dream where she felt she met God. He told her that He loved her. It was such a strong revelation that it changed her life. She was still on a lot of mental health-related medications, and badly wanted to come off them. Irisdene had a long, lovely conversation with her and counseled her to work with her doctor to gradually discontinue the medications. She also referred her to Highwood Health Retreat and had prayer with her. Please pray for her and all the others that were touched that day.

“Christ came to this world to give this message to His servant to give to the churches. It is to be proclaimed to every nation, kindred, tongue, and people. How are we to give it? The distribution of our literature is one means by which the message is to be proclaimed. Let every believer scatter broadcast tracts and leaflets and books containing the message for this time.” Christian Service, 145.

May God bless you all. Please keep praying for us and for all who received the literature!