The Snake, the Girl,  and the Witch Doctor

It was 7:00 pm Sunday morning. Our family was just finishing family worship when our gate intercom buzzer started buzzing incessantly. “Probably someone wanting to buy a gallon of gas or a stalk of bananas,” I thought out loud. But the buzzer kept squawking. My husband Barac rang the gate phone. It was young Vladimir, our neighbor boy. His sister Esther had been bitten by a snake. Could we come help her? I quickly grabbed my first aid box, charcoal, and a package of clay. 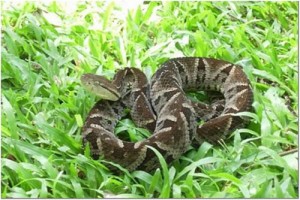 Esther was bitten by a snake 20 minutes before Laurie arrived with charcoal.

When we got to Esther’s house, we could see her sitting on a bench by her house. Her father had applied a tourniquet to her leg below the knee but it was so tight that her circulation had been cut off for at least 20 minutes when we arrived. I had been praying since I left home, yet one look at that purple, mottled skin with its oozing wound, made my stomach turn. She is 16 years old and is like a second mama to her four little brothers. They were hovering around her, rubbing her back, and kissing her tears away. My heart felt tight in my chest.

We gave her charcoal to drink and then made a small slit between the wounds and began to suck out the poison, but because so much time had passed since she was bitten, it didn’t seem like we were going to accomplish much. We slowly loosened the tourniquet, which brought her immediate relief. We helped carry her upstairs to a bed. We applied the charcoal poultice and kept giving her charcoal to drink every 15-20 minutes.

As I sat on the rough wood floor beside the bed, and shooed away the cockroaches and caterpillars that kept trying to climb on my feet, I thought back over the years since we came to live here. Esther’s family has remained very aloof from us because of our beliefs. They, especially the father, want to continue in their superstitions and Catholic traditions. Esther has been the only one that reaches out to us from time to time and has wanted to learn new things. Last year, she came to our sewing class and learned how to design her own clothes. Her father doesn’t let her leave the house very often and doesn’t want her visiting us, so we have taken to dropping by the house and leaving her books, tracts, and videos on various spiritual topics, which she and her little brothers enjoy immensely. She had been the one that begged her father to send for us that morning against his will. This was an opportunity for the Lord to show His power, and He was doing just that. A couple hours passed and her color was good. No nausea, dizziness, or headache, and she was sleeping peacefully.

Noontime rolled around and my stomach rumbled from skipping breakfast. My husband returned and I told him to come back to get me in another hour—by then I would be content that she was out of danger. As I showed her mother how to change the poultices and keep the wound sterilized, she smiled and thanked me for helping. Suddenly we heard numerous footsteps coming up the stairs into the house. I turned around to see Esther’s father and one of the local witch doctors entering. “Of course,” I thought, “Satan isn’t going to give in that easily.” Immediately he stooped over Esther and started chanting something, at the same time shaking up some potion that he had brought. Esther awoke startled and asked what was happening. Her father assured her that now she was going to get well, that he had brought the cure. “Cure for what?” I thought out loud. He made her drink the potion, which I found out later was whiskey, the bile from the snake, and some herbs. No wonder she vomited shortly after taking it. Then he started rubbing her leg above the wound with leaves and ashes from the snake that they had burned outside. She started whimpering from the pain as everyone stood quietly watching, but I couldn’t contain myself any longer. “This is totally ridiculous, she is recovering beautifully, resting peacefully, and you come in and bungle everything up with these crazy concoctions!” I said. The witch doctor raised his finger to his lips to shush me and said that I should go, because the power that was in me was fighting against the evil poison in her body. “Wow, finally he said something that made sense,” I thought. As frustrated as I was, I realized that I was wrestling against “principalities, against powers, against the rulers of darkness of this world,” and there was nothing more I could do, but pray. This wasn’t merely a snake bite; it was the “old serpent” that was still biting. 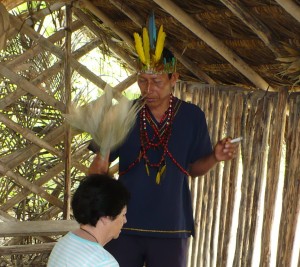 As he examined her, he started finding “dangerous indications” that she needed to go to the hospital, her breath was hot, she had spots on the whites of her eyes, her spit was thick and sticky, and she was sweating on her neck and back, among other things. I bit my tongue to control my laughter. If sweating was a “dangerous indication” then I was worse off than she, in that dark, closed-up room with no windows and 90% humidity in the air.

Her father decided that they were going to take her to the hospital because she hadn’t received the antivenom, so that meant that she would never get well. It was now more than seven hours since the snake bit her. She tried to convince her dad that she was fine and wanted to stay home, but her cries were in vain. I realized that there was nothing more that I could do, so as I left I confronted her father, telling him that he was going to waste his money (they hardly have enough to live on) and that Esther didn’t need the hospital. It was only going to be a bad experience for her, more pain, and possibly an allergic reaction to some medication that they may give her. He waved me away and told me that he knew how to take care of his daughter.

As I walked home, I swallowed at the lump in my throat from the frustration I felt. As I came to the turn in the road, I looked out over the emerald valley. The sun had just broken through the clouds and bright beams like diamonds were reflecting off the tin roofs on the little houses scattered here and there. My daughter’s favorite song that we had sung that morning at worship came back to me: “When He cometh… to make up His jewels, all His jewels, precious jewels, His loved and His own… they shall shine in their beauty, bright gems for His crown.”

“Lord,” I prayed, “I don’t know why things happened as they did, but help me to understand Your will in this situation, and may Your name be glorified.”

A couple weeks later, Esther’s brother Vladimir came by for a visit, wanting me to help him with his English homework. We asked about his sister and he told us that the doctor at the hospital had told them that they were ignorant, superstitious country people and that after that many hours after the incident they should have stayed home and let her rest and recover. The doctor also said that they should stop listening to witch doctors, since they don’t know anything about medicine and do more harm than good. They went to another hospital and the nurses there gave her a couple shots of some drug to reduce the swelling in her leg. Immediately a rash broke out all over her body and she developed a low grade fever for a few days. Vladimir smiled before he left and said: “It happened just as you said, how did you know?”

“And we know that all things work together for good to them that love God, to them who are called according to His purpose.” Romans 8:28.