As we mentioned previously, we saw the effort and desire that Elder Orlando and his wife Dolores had to raise their children in a quiet, Christian atmosphere, and we at Maranatha Medical Ministries (MMM) decided to build them a house on the Outpost property. Orlando and Dolores have been very active and diligent in all church operations, and are faithful in outreach and Bible studies. Having the opportunity to help them in this way was a blessing for us as well. We now have a solid, complete Christian family living at the Outpost. 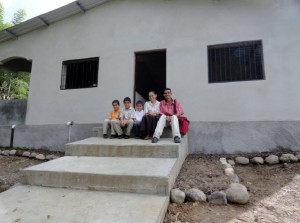 Orlando and Dolores and boys at their new home.

As always, construction began slowly. But in time, the house began to materialize. Orlando made 3,000 bricks by hand. The blocks were then covered in concrete. Even though Orlando does not know much about construction, he kept busy doing whatever he could to help with the work. We would often see him running up the hill with a load of sand in his wheelbarrow, or carrying cement bags on his shoulders. He did not just sit back and watch the house being built, but worked hard to help build the house that God has given to him.

Construction has now ended, and the house is just about complete, it only needs windows, some painting, and other minor touches. Orlando and his family have moved in and they are very happy! I can even see a different attitude in their children. They have begun landscaping and planting a garden, and they enjoy the peacefulness as they sit on their steps and listen to the babbling river below. We pray that this new home and new setting will bring an even closer walk with God for them and their children. 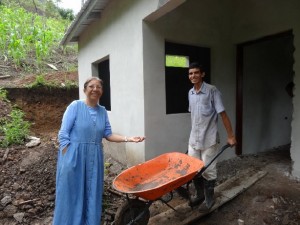 Hard at work building a new home for Orlando and family.

Recently I received a call from my spiritual daughter Elsy, who works with Radio Redemption in Jutiapa, La Ceiba. They needed help with a church outreach program in a new community, and so she wondered if we could come and help. I told her that we would do whatever we could do to help, and would somehow fit it into our already full schedule, the same way that she fits us in when we need her.

So early one Friday morning, Rene, Ruby, and I packed our things and headed for the six-hour drive to Jutiapa. The next day Sabbath morning, Rene woke up with a sore throat, so I had to speak for him during the church service. On Sunday, we set up at a school buiding. I set out to do the consultations, and Rene and Ruby did the dental work. Even though it was early when we arrived, there were already many people lined up, waiting to be seen. We prayed and began our work. 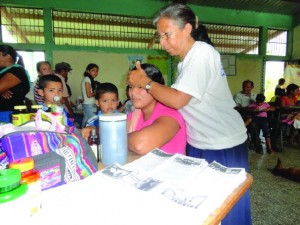 From 8:00 am to almost 3:00 pm we ministered to all those that came, with their different needs. Here in Honduras, one of the greatest needs is to simply drink water. If they would just do that, the majority of their illnesses would disappear. I had one consultation after another, and as weariness and hunger set in, I thought about Jesus and the multitudes that followed Him, and how no one who came to Him went away without being helped. That thought kept me going as I counseled with the people. I took a moment to check on Ruby and Rene, and they too had lines of people waiting for dental care. I am thankful that our young people at the Outpost have learned that they have been saved to serve, and that they do it with love. By about 3:00 pm my voice was about to go and the pastor insisted that we stop. He said a word of prayer and thanked us all for the help. We, too, were thankful to the Lord for the privilege to serve.

Over the years we have had hundreds of patients come to us for treatment, using God’s natural methods of healing, and God has blessed abundantly. But there are times when major surgeries are needed which we are not able to perform. But God’s people should never turn a blind eye to anyone in need. “But whoever has this world’s goods, and sees his brother in need, and shuts up his heart from him, how does the love of God abide in him?” 1 John 3:17. 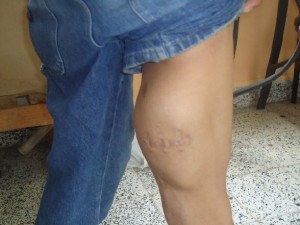 A few months ago, José, a young man from the mountains, came to us for help. A former patient had told him that we had helped her even though the hospital had not been able to. She sent José to us for help. José had a large tumor in the posterior muscle of his thigh. He had already been diagnosed and told that the tumor needed to be surgically removed. But, of course, José comes from a very poor family and he cannot read or write. Trying to get help for the surgery was almost impossible for him.

We told him to come and stay at the Outpost for a week so we could find out more about this tumor, which was becoming very painful. While he was there, we strengthened his body with vegetable juices and fresh fruits. Rene applied poultices and hydrotherapy treatments. 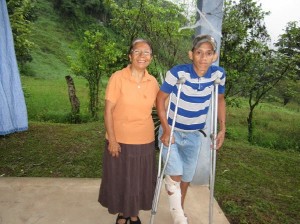 Jose recuperates with the help of Elsa and MMM.

We ran back and forth to the city to make arrangements for the surgery, which was not free. But between the church members, the restaurant and the ministry, we were able to collect adequate funds. We know God does not place people in our path so that we can simply show our kindness to them. God wants us to always tell of His love and mercy, and His desire to save them eternally. So, in addition to the health treatments, José took part in our daily worship service and enjoyed the beautiful music provided by our volunteers. His mother would often join us, and so she also heard the truth from the Word of God.

The day finally arrived, and I drove José and his mother to the clinic in the big city. The surgery was a success! And because his body responded so well through the procedure (thanks to God’s natural remedies), he was permitted to leave the clinic the very next day.

José returned to the Outpost to rest and receive some post-op treatment, but he is now at home with his family. He is ever thankful for all for the help he was given, but we always direct the gratitude to God, for it is He who gives the help that we need. It is God who provides the true healing that we need. It is God who gave His life for us that we might prosper and be in perfect health: mentally, physically, and spiritually. Please remember José in your prayers. May he continue to seek the Lord and follow His counsel.