We are living in uneasy times. In my travels around the world, I have seen very poor people with very real problems. But even in countries that are not greatly impoverished we have challenges—but not due to a lack of material things, but because of broken hearts and dreams, as well as health issues. The people in these testimonies were faced with major challenges in their lives and have survived mentally and physically. (Names have been changed for privacy.)

My name is Suzana Ligenzová. I am 51 years old and live in the mountains in Czech Republic. At 14 I was diagnosed with a salivary gland tumor and had surgery. Until I was 24 years old, my lifestyle was just like everyone else. It was a really hard time because I was not only studying at the university, but had gotten married and had a child. We lived in a dormitory for couples. I had to manage family life—being a wife, a mother, and a cook—as well as attending to my studies. I was very stressed. God felt far away, and I didn’t really care about Him. 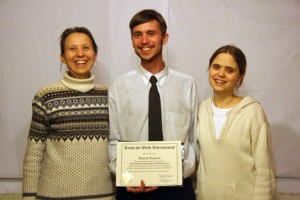 Suzana with her two youngest children.

Then one day I had a small headache—a small one. I didn’t pay much attention to it at first, but it kept getting worse. I then found a small lump on the right side of my neck. It was really small, about the size of a hazelnut. During the next month more lumps grew around it. They grew fast and began pressing on my brain. It was very painful. I was unable to continue my studies and care for my family. I didn’t shed many tears, but cried inside, asking, “How long will this last?”

In the next-door apartment were two young men who were studying medicine. They invited me to their hospital and I underwent many tests. The tumors grew steadily bigger. The examinations were numerous and the pain exhausting. The doctors suggested surgery, but the doctor in charge admitted that my future was uncertain. There were so many tumors that if I had surgery I might not survive or I could end up with brain damage. I might not be the same person anymore.

One night, I remember looking at my sleeping baby and husband. I thought, “How could I possibly have come to such a place in life? Where is the God that knows everything?” I found myself kneeling down as I had seen my mother do, and I prayed a desperate prayer: “Lord, my God, if you exist, please save me! Save me for this child and for this man!”

I remember that the pain left me and I slept well. Even the headache grew less severe. In the morning the pain was very minor, but the tumors were all still there. That same day a lady came to visit me. She said: “We were told that you are not feeling well and that your tumor has grown. Here’s a book written by Dr. Kristine Nolfi. She was cured from cancer. Read it!”

I read the whole book that very same day. I grasped the message and decided to do exactly what this author had done and began the very next morning. I somehow knew that this was the recipe that would save me. Miracles happened! In two weeks the headaches were gone, and in few months many of the tumors had disappeared. After a year there were only a few small tumors left. I still have those small tumors and you can see the scar from the surgery I had when I was 14. But since I began this healthy lifestyle, the tumors are stable and have been so for 26 years now.

I had two more children, and raised all three of them with healthy lifestyle principles. The two younger ones decided that they would help people by teaching them this way of living as well. Today they work in a health center in Nigeria in connection with a local hospital.

My name is Margit. As a teenager, I became interested in new things, and step-by-step I slipped more deeply into New Age practices. One of my motives for going in this direction was a great desire to stabilize my health.

As I delved into alternative circles, some of my convictions changed into new thoughts such as: “Nothing is right or wrong. We have the right to act as we want and desire, and we are only accountable to ourselves.” And: ”To be hurt and to hurt is a natural part of our own development in our approach of a higher level of consciousness.” These mental patterns were far from the principles with which I had been raised, as a daughter of a Lutheran priest, but as time passed they became real to me, and thoughts led to actions. I ended up in deep depression and was admitted to a mental hospital with suicidal thoughts. I was given various drugs and had 26 treatments of electroconvulsive therapy (ECT). Nothing helped. I just had numerous side effects.

One of my friends, a person who had been with me in the alternative circles, decided to seek help by seeking God. While I was in the mental hospital she came to visit me, but I was very skeptical. I thought I would be able to manage my own life if I could just get well and find a job. 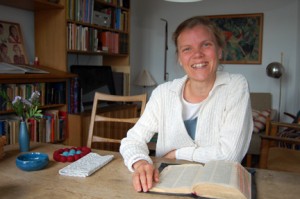 The psychologist at the hospital didn’t really know what to do for me, so I finally accepted my friend’s offer to pray for me. I started to visit the church she attended and to read the Bible. In the Word of God I found a particular verse that I, despite my mental condition, was able to cling to: “I can do all things through Christ who strengthens me.” Philippians 4:13.

The psychiatrist had written in my journal that neither drugs nor ECT had helped me, and that they were not able to communicate with me after the last ECT. But just three weeks after the last treatment, he wrote that I had received hope in my life, that I was able to think about the future, and that my mood was greatly improved.

New thoughts entered my mind through the knowledge of and the faith in God’s love for me. New patterns of thought were created in my damaged brain. I experienced that there is power in the Word of God and that faith and obedience leads to true healing of body and mind. Two-and-a-half months after my last ECT, I was discharged from the hospital. I had been there for ten months.

My life has changed a lot since then. I follow simple principles of health, as mentioned in the Bible: fresh air, sunshine, temperance, rest, exercise, good nutrition, water, and trust in God’s power. I have a new life, and I am so thankful!

So how can we survive in a world that is so unfair and shifting? We have to take responsibility for our own health and our own choices. We cannot just rely upon a system to tell us what to do. If we pray for wisdom and are open to God’s guidance, He may help us see a way out that we would never have thought of. Count on divine guidance—ask for it. Those who honestly ask will receive. Matthew 7:7.