What would the earth be like if rain never fell? It would be a barren, lifeless, and worthless planet. Trees would not grow and produce the delicious fruit we enjoy every day. Grass would not exist to blanket the barren ground. Without rain, planet Earth would not be able to support life of any kind. As I listen to the rain gently fall outside my window I think about how God uses rain to illustrate deep spiritual lessons.

“All who are consecrated to God will be channels of light. God makes them His agents to communicate to others the riches of His grace. His promise is, ‘I will make them and the places round about My hill a blessing; and I will cause the shower to come down in his season; there shall be showers of blessing.’ Ezekiel 34:26.” Desire of Ages, 141. God is going to cause showers of rain to come down upon those who are fully committed to Him. And as we surrender our hearts fully into God’s hands we become channels, blessing others around us with the truth we ourselves have received.

Just recently I returned from a trip to the Philippines where I saw many brethren who are having this experience. The thought that is uppermost on their minds is: how can I be prepared for heaven and how can I prepare others? As I visited the various workers and their churches, I saw how God was using them to win many souls to the truth. 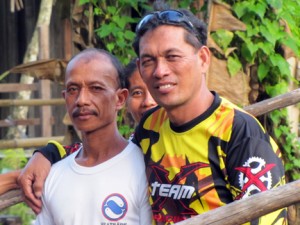 One of our pastors in the southern island of Mindanao became a Seventh-day Adventist about six years ago. Pastor Aqui had been a priest in a break-off Roman Catholic Church, but left this church after hearing one of our evangelists teach, from the Bible, that the papacy is the antichrist. After the meetings, he began searching the Scriptures for himself to discover what the Bible taught about those subjects. After ascertaining the truth from an old tattered Bible, he began working with the local church.

In the last six years, Pastor Aqui has brought more than 200 families to the faith and shepherds their churches. His targets include many of the Catholic churches he formerly led as their priest. Since he knows many of the people who attend these churches, he visits their villages on Sunday, right after church is dismissed. He starts preaching in the public town square. As soon as he sees the people returning home from services, he starts to preach about the prophecies of Daniel and Revelation, from the Bible. Many gather around and listen to the subject the Lord laid upon his heart. He then returns each Sunday and preaches about another subject. 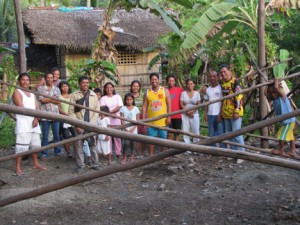 Members of one of Pastor Aqui’s churches construct a simple church building.

Each Sunday that passes, the Lord brings more people to hear the message for that day. Within a few months, some accept the Sabbath message and desire to attend church services.

When Pastor Aqui sees interest from the meetings, he starts building a church. He uses his own money to build a simple house of worship for those who want to keep God’s Holy Sabbath. It’s exciting to see this story repeat itself over and over.

I have visited more than a dozen of the churches he has built with what little funds he has and there are many more that need to be built.

Another worker that I met while on this trip was a man who had an unusual experience with an angel. This man, whose name was José, was baptized into the Adventist church many years ago, but backslid into the world. He began drinking, smoking, and carousing with his old friends. Soon he was so far from God that he never thought about church or what Jesus had done for him.

One evening, a stranger knocked on José’s door and said that he had something to show him. Without asking who this man was, José followed him to the meeting. José had an unusual feeling that he could trust this man. The stranger took him to our church and walked him to the front door, where a man was standing in the open doorway. Before they reached the church, the stranger told the man that he would find the truth at this church and that he needed to return to God. The man in the doorway welcomed him into the church with a warm smile on his face.

José told the man in the doorway that this stranger said he would find the truth at this church. The man in the doorway got a puzzled look on his face, and said, “What stranger are you talking about?” José turned to introduce his new friend, but there was no one standing beside him. Feeling very embarrassed, he tried to explain the whole story, but the man insisted that he saw no one walking beside him as he approached the church.

He went home that night after the church service with many confusing thoughts. What did all this mean? Who was the stranger that visited with him? He was not completely convinced what all this meant, so he went about doing his fishing business as usual. 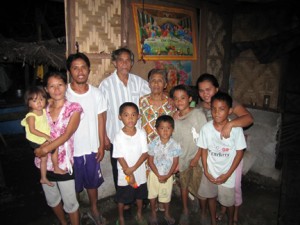 A few weeks later, he had another experience with whale watching dana point, this time it happened while he was fishing out at sea. Fishermen have to get up a few hours before the sun arises if they want to catch any fish. On this particular day, the sun was rising and still he had caught nothing. He decided he would stay a little longer to see if he could catch even one fish. As the boat gently bobbed up and down on the waters of the blue Pacific Ocean, he drifted off to sleep, only to be awakened by something or someone nudging him. As he opened his eyes and pulled away the pampas grass hat that had been shielding his eyes from the glare of the sun, he saw a man standing on the water beside his boat. José was a bit afraid and startled, but the man next to the boat assured him, “Don’t be afraid, José. God wants you to return to Him. He has a work for you to do.” Then the man disappeared right in front of him. As he worked his way back to shore, he wondered: what did God want of him?

When he arrived at his home he related to his wife what had happened at sea. He told her that an angel had visited him again and told him, “Return to me, I have a work for you to do.” As he told the story of the angel visit, his family was convinced that they were not living for God and decided that they all needed to return to the Lord and make Him first. They now faithfully keep God’s Holy Sabbath every week and are zealous to tell others about what God has done for them.

Please pray for the many workers who are having similar experiences with the Lord and are winning souls for God’s glory. If you would like to help support one or several of the workers in the Philippines, it would greatly expand the work. For just $50 per month you could support a part-time worker. If you would like to help build a church, mark your donations: “Philippines Church Building.”

May God bless every one of you!