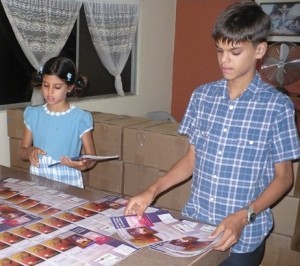 Preparing literature to hand out

“Go ye into all the world, and preach the gospel to every creature.” Mark 16:15. The task can seem overwhelming, but is no more daunting than the same task that was given to a handful of discouraged believers two thousand years ago:but just as they fulfilled their mission, so can we today! As time has passed and “every creature” has drastically increased, God has given us additional media of reaching humanity. One of those “new media” which does not seem so new in our technological age is the tried and true printed page. Thousands have been reached and countless more will be through simply sharing truth-filled literature with those longing for something better. “Some will be reached by our literature who would not be reached in any other way. From our books and papers bright beams of light are to shine forth to enlighten the world in regard to present truth.” “And in a large degree through our publishing houses is to be accomplished the work of that other angel who comes down from heaven with great power and who lightens the earth with his glory.” Testimonies, vol. 8, 87; Ibid, vol. 7, 140. May we never underestimate the power of truth-filled literature! 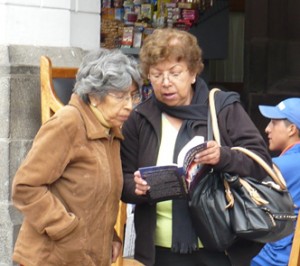 Reading the literature they have just received.

The Orellana family has a burden to share the printed page with the multitudes in the mountains and jungles of Ecuador. They share how the Lord is blessing their work: “Our plan was to start the next morning at Quito, the capital of Ecuador, and distribute in all the government offices, court of justice, and the presidential palace. The people’s reception of the books was very surprising to us, being that we expected a lot more refusals in the capital city. A couple of times security guards stepped in and defended my husband from an angry official that thought he was selling the material. They even helped him finish passing out the rest of the books, encouraging all their fellow employees to take one…. One man in an office that our 13-year-old son, Caleb, was working, called to him: ‘Tell me’ said the man, ‘have you read this book yourself?’ ‘Of course’ responded Caleb, ‘that is why I am helping to distribute it. It is an awesome book.’ The man grinned back and said, ‘Then give me a short explanation of what it is about, so I can know whether I want to read it or not.’ ‘Well, it’s the history of God’s church from the time that Jesus returned to Heaven after His resurrection, until His second coming in glory to take His children to the mansions He has prepared for them.  It tells us what is happening right now in the world and what will happen in the near future. Believe me; you don’t want to miss out, especially the part about the earth made new!’ As Caleb shook his hand and turned to leave, the man called out, ‘Thank you, I will read it!’ We also had the privilege of visiting a number of remote Indian tribes in the Amazon basin, accessible only by boat. Both tribes begged us to return and teach them more of how to make a living with their hands. They have tried to isolate their tribes from ‘civilization’ as much as possible and all the corruption that comes with it and want their children to keep their customs and language. The benefits that the government is offering them seem that it will contaminate their children with ‘Western culture.’ We promised to teach them how to repair their own boat engines, do masonry work, make bathrooms, and cut hair, etc. We believe that the Lord impressed them to open the door to us, because we showed interest in helping them for nothing in exchange.” We praise the Lord for faithful workers like the Orellana family who are sharing the gospel throughout Ecuador through literature, education, medical ministry and more. They request our prayers and support that the Lord may give success to their labors for Him. If you would like to help their work you can mark your donation “Ecuador.” 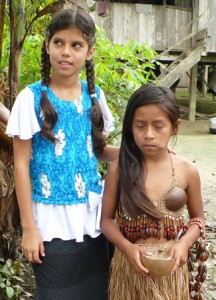 One of the children from the tribes who are seeking help

Yours in giving this message to the world,