Piedra Hancha is a small mountain village about four miles straight up from us—and I do mean straight up! The name of this village means “wide rock.” We have known about it because over the years, most of those living there have come to the clinic for treatment at one time or another. Another reason is because Ada’s mother (the grandmother of staff member Rene) lives there. At the beginning of this year, the church had a meeting regarding plans for evangelism. Ada, of course suggested that they go to Piedra Hancha, but some of the members mentioned that it was too far to go, and others mentioned that it was a very strong Catholic community and our presence might not be welcome there. 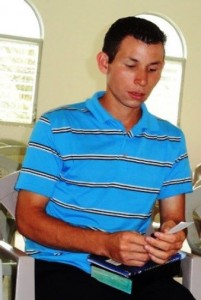 Brother Orlando raised his hand and said that he and his family would be willing to go. So every Sunday morning they stop by the outpost, pick up Ada and whoever else wants to go, and climb up to Piedra Hancha. They began by having a small worship service at Ada’s mother’s house, and inviting the neighbors and family members. One of those that began attending the meetings is Selvin, a very sincere young man, a “Berean” (see Acts 17:10, 11). He paid close attention to what was being taught from the Bible and then would study on his own to see if it was so. He not only studied, but the next day he would take his Bible to work and share what he had learned with his five brothers. 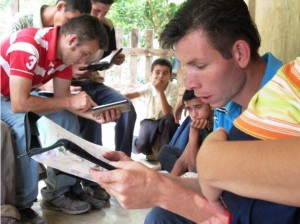 Selvin studies with his brothers.

Not long after these Bible studies began, the family started coming down on Sabbath morning for church. The first morning, to my surprise, I saw Dominga, an old patient of ours. She ran up to me and hugged me, and with a big smile said, “These are all my boys, and I’m so thankful to God and you for what He is doing in their lives.” I did not know those were her sons, and seeing them all sitting in church listening attentively to God’s word brought tears of joy to my eyes. God is so good! We can surely say that we found ripe fruit in Piedra Hancha! Please keep this dear family in your prayers. 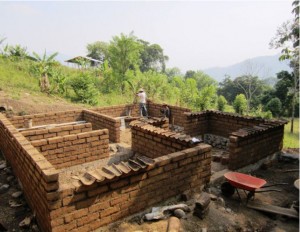 A house for Orlando’s family.

We have a lot of construction going on here at the outpost, and also at the church. One of the buildings going up is a house for our faithful first elder, Orlando, and his family. Elsa and I are very fond of them. Orlando is a humble, sincere man who is trying to serve the Lord and lead his family the best he can. Some of you may recall a previous article where we shared Brother Orlando’s testimony of learning how to read by asking God to teach him, so that he could go and give Bible studies to others. He and his quiet but spiritually strong wife Dolores have proved to be trustworthy with their duties at the church. One of the things that has impressed us the most is their perseverance in working with their children. From the very first time they heard about the importance of family worship, they began to implement it in their home.

We had been concerned about their living conditions. They live in a tiny one-bedroom house in the center of the village where the children can be influenced by all the sights and sounds around them. Brother Orlando was trying to build an extra room for his boys because they are getting bigger now. Elsa and I talked about the possibility of building a modest house on the outpost property, where they could have enough land to cultivate their own food, and where the children would be away from the negative influences of village life.

God’s word tells us: “But whoever has this world’s good, and sees his brother in need, and shuts up his heart from him, how does the love of God abide in him? My little children, let us not love in word or in tongue, but in deed and in truth.” 1 John 3:17, 18.

We told Orlando and Dolores what the Lord had placed in our hearts and showed them the area where we thought the house could be built. We asked them to pray about it and let us know when they had made a decision. A few weeks later they came back with smiles of gratitude to God and said they didn’t have much money, which we already knew, but that they would make all the adobe blocks for the house.

And that they did! They worked hard for several weeks, making about 2,000 adobe blocks. With the help of his brothers, construction began. 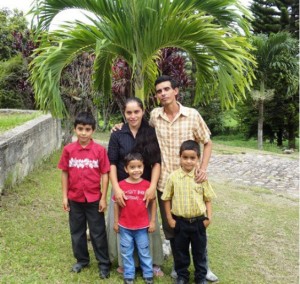 Orlando and Dolores and family.

We pray that this new home, with God’s help, will be used to help their children build characters for eternity. And as long as Brother Orlando continues to do his work as an under-shepherd in the church, and continues to evangelize other villages through Bible studies, there will be construction done in the lives of people for eternity.

The next building project will be the Sabbath School rooms for the children. Until now, the children have been meeting in the house in the back of the church. But it really does not have enough room to have two separate classes and also be able to decorate and have monthly themes. But what really opened our eyes to the need of having these rooms was the overwhelming response when we had the children’s evangelistic meetings. We had over 60 children who were eagerly learning the Bible. If we’d had the rooms, they could have moved right into the Sabbath School classes. With this need in mind, the church decided that even though there was not enough money to cover all the cost, they would trust the Lord and begin construction. Yes, construction for eternity!

By Joe and Elsa Willis of Maranatha Medical Ministries in Honduras. Donations can be sent to the ministry via Paypal from their website: www.maranathamedical.org.