As our school project slowly but surely develops, God has given me plenty to do in the meantime. I have been very busy in Botswana’s conference churches. This is a miracle, because when I arrived last year, the pastors told me that because I was trained elsewhere, they couldn’t give me their pulpits.

I began giving Sabbath afternoon Bible studies in homes, and it so happened that one of the people visiting was a church elder. As he listened to the study, he was so glued to it that he arranged for me to do Sabbath opening vespers at his church. Gaborone Central Church is one of the largest churches in Botswana. It has such a large membership that they cannot accommodate all their members at one time into the church building. So they run two services. I presented the Spirit of Prophecy, teaching them the test of a true prophet, and all about Ellen White. The message was gladly received. Some came to me after the meetings and told me they thought so-and-so was a true prophet, but after the presentation it was now clear that he was not. Some also came weeks afterwards and requested materials on the topic. 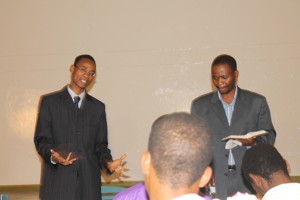 After several weeks went by, a group from the same church invited me to run a revival and reformation week of prayer. I agreed and presented the basics of righteousness by faith. There was a very positive response both from the church members and non-Adventists visitors alike. Among the visitors were two Evangelical ministers from two different churches. I got an opportunity to speak with one of them and he expressed his great appreciation of the message and even took notes of the sermons on righteousness by faith. Other visitors were secondary school teachers from a nearby school. They attended daily and wanted more. God was indeed working! Many were encouraged to overcome sin and gain complete victory over it. At the end of the week of prayer when I made an appeal for baptism, about three people came forward and wanted to be prepared for baptism.

I also received an invitation from “The Ark,” a conference preschool, to train the teachers on the principles and object of True Education. I conducted the presentations and gave them assignments, and it turned out very well. The teachers wanted handouts so they could study them on their own time.

Many people want the truth, but it is hard to find it here. One pastor I talked to recently told me that when he read the text in Amos that said there will be famine in the land, he never thought it had any application to the church in our time. But we see people so hungry for truth at an alarming rate here. I am currently very busy with personal Bible studies on Sabbath afternoons, weeks of prayer and even electronic Bible studies, where I answer many questions about the Bible. Many of these people learn about our school and want to be students there.

I also worked in South Africa, conducting a youth week of prayer at Mamelodi West, a church in Pretoria. The pastor there was initially reluctant when we started discussing the project. But the elders insisted until it finally happened. It was well attended, with over 50 people every day of the week and more than 200 on Sabbath. On Sabbath afternoon, I answered a lot of questions about health, the Bible, and end-time events.

During this week of prayer, two young sisters from a Sunday-keeping church attended. They were the daughters of that church’s minister. They came every day of that week and took notes from every meeting. They kept saying, “These things are so clear, and you make them simple and easy to understand.” One of them wants to start keeping the Sabbath. Please pray for her, as this is a tough decision. 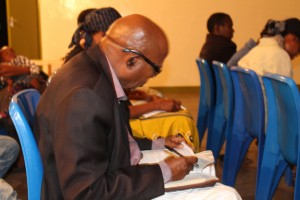 I recently spent a weekend at the University of Botswana running a mini-prophecy seminar, a pre-run for the big evangelistic series we want to conduct at this school. Due to poor advertising, the seminar was not as well attended as we expected. Nonetheless, many people came. More than 30 came the first night, and on Sabbath the numbers doubled. More and more showed up. I presented on the Sabbath, the change of the Sabbath, America in Bible prophecy, and Sunday laws, along with updates on current events. Non-Adventists came for every meeting. Although I thought I was going to chase them away with these testing truths, they stayed. Some of them did not even leave for lunch but waited for the afternoon program. One of the Adventist students who attended said, “The speaker makes things easier for us to understand. He really grounds us in Adventist teaching, giving us the reasons for our faith.” Many cannot wait for the main campaign coming later on at the University.

While busy doing all this evangelism, we have been distributing Last Generation magazines, and many people like them. The Adventists are reading them first before giving them away and they are a handy tool in evangelism. I have also met many young men who wanted to be trained as pastors. They came to me for counsel. I showed them the two-course outlines of the Theology and Pastoral Evangelism courses, and they just decided that they want to study at the school we are about to start. We have students all over Africa who are interested in coming here to study, not to mention the many in Botswana who want training. Oh, that we could pray for the Lord to help us get a property where we could start the school as soon as possible, without wasting any more time! Please keep this school project in prayer so that many can be trained for the Lord’s work.

May God bless you.