Have you ever had the desire to go to the “mission field”? Seeking the lost is what Christianity is all about. Jesus spent His life giving us examples of how to show His love, and how to reach the lost. Even His last words to the disciples in Matthew 28:19 were a mandate to do just that.

“But how can I put my life on hold and go to a foreign country?” you might ask.

Friends, the answer is that you don’t have to. There is an “invisible” mission field near you! And don’t worry. Even if you are not able to go physically to minister, you can still have a part in working there. It is a literal, physical place, but most people don’t even know it exists. That’s why we call it “invisible.” Where is it hiding? Behind prison walls! Sadly, this mission field exists in every society in the world, and here in Virginia, it has over 30,000 inhabitants. Besides these men and women, there are family members that suffer with them. Though we all have differing concepts of prison inmates, the truth is, most of them are not much different from the rest of us. They have families and friends, they are blue-collar and white-collar workers, they represent many ethnic groups, and they profess a variety of religions. The difference between us and them, from a mission perspective, is irrelevant: “For all have sinned, and come short of the glory of God.” Romans 3:23. So the fact that they are behind bars doesn’t mean we can cross them off our gospel “to do” list. In fact, Jesus mentions our duty specifically in Matthew 25 when He describes the separation of the sheep from the goats. In Jesus’ chilling condemnation of the goats He declares: “I was…in prison and ye visited me not.” Verse 43. 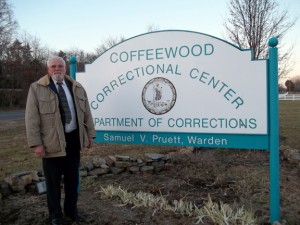 Johny Carmouche at his ministry’s prison.

For almost five years, Hartland Institute has been ministering to inmates in a nearby prison. Johny Carmouche, who was a resident in this mission field about 12 years ago, is now coordinator for this outreach.

It all began when Johny learned that a Messianic Jewish group needed a sponsor from outside in order to hold meetings. Feeling impressed that the Lord was calling him to this ministry, but not wanting to go back behind bars, Johny ignored the still, small voice. But in the end, the Lord won out, miraculously opening the way for Johny to receive permission to minister inside the prisons.

“We have much in common with the Messianic Jews, and they permitted us to teach and preach from the Old Testament during a portion of their meetings,” shares Johny. So, along with College Outreach Director Brian Beavers, Johny started Hartland Prison Ministry. “Word quickly spread through the prison that someone was teaching straight from the Bible, and more inmates came. Out of that grew weekly meetings for Seventh-day Adventist groups who speak English and Spanish. We have also begun monthly meetings in several other prisons,” Johny relates.

Johny understands the anxiety people sometimes feel when approached about this work. “But it is in desperate need of the real gospel,” Johny says with pain in his voice. “This mission field is constantly growing, and although the prisons hold a variety of religious services—Muslim, Buddhist, Jewish—the majority of the Christian services are a nondenominational hodgepodge that leaves real truth seekers empty and in some cases even drives them away to these other religions.”

“In fact,” adds Johny, “the Messianic Jewish service included non-Jewish men who were seeking truth, and two of them were among those we eventually baptized into the Seventh-day Adventist Church.”

The need in this mission field is almost endless. We provide the inmates with a very inexpensive Bible when they begin to attend, if they need one. But when we see someone becoming serious in their search for truth, we try to give them a nice study Bible, and The History of Redemption, which consists of eight inspired books in one volume. Inmates are allowed only a small number of personal books, so this provides them more study material than they could otherwise have.

We have also received requests in the mail from inmates around the country, and we try to fill these when we have the funds. No matter what they have done that put them behind bars, these men have reached the low point in their lives, and when they decide to seek forgiveness and a relationship with Jesus Christ, it is a blessing to them, their families, and to society at large. Every day, inmates are released back into society, and I can almost guarantee that someone with a criminal record lives near you!

Unfortunately, release is not always a joyful experience. Inmates find that their criminal record, like a dark cloud, follows them everywhere. Even the well-educated often have to humble themselves and take employment in menial work. They need the strength only Christ can give to get them through this coming trial. Without it, they have little hope of finding happiness, or even becoming productive in society. So often, they fall back into the same lifestyle that brought them to the “invisible” world of prison and we all suffer the consequences as crime perpetuates itself.

As word about this outreach spreads throughout the prison system, requests for literature, as well as appeals to start services in outlying prisons, are increasing daily. Aside from the weekly meetings at the nearby prison, we are currently holding monthly services in five other prisons, three of which are over two hours away from Hartland Institute. The Lord is opening doors, but volunteers and resources are needed to continue.

“Most inmates see themselves as outcasts, part of an invisible world no longer wanted by those on the outside. Many come to our meetings out of curiosity. They listen to us talk about God’s love with their arms crossed. Without a doubt, God’s truth is powerful, but it is His love demonstrated that actually softens their hearts. When they see our consistent faithfulness and sincere desire to help them, that’s when they begin to respond. Slowly they realize our love and concern for them comes from our connection with God who knows and loves them, and they begin to study and attend regularly. It’s priceless,” concludes Johny with a smile.

No matter where you live, if God is calling you to get personally involved, we urge you to respond. There are many ways you can help. Even if you are homebound, you can write to inmates without disclosing your name or personal information. We can guide you through the “dos and don’ts.” Please contact us—we would love to talk to you.