When in Corinth, Paul decided to preach the gospel as it should be preached: with selfless love for souls who were perishing for lack of knowledge. With this in mind, I feel a great responsibility for our work in Brazil and have received countless blessings. Paul’s time in Corinth is very significant and it makes me think about my own spiritual education. God honored Paul in a special way: He gave him his credentials as an apostle of the gospel and gave him many responsibilities. I have been here for three years, and the task of opening this mission field is a privilege that requires determination and wisdom. 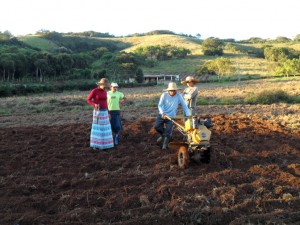 Plowing with the rototiller.

There is a great need to develop the minds of young people to understand that farming is a highly rewarding occupation. There is no culture comparable to that of the garden. Plowing and cultivating the land for planting involves profound lessons of patience and perseverance. In Isaiah 28:24-29, God instructs the plowman to sow and teaches him about trials. These trials come from the Lord, who is wonderful in counsel and wisdom.

When we first arrived in the area, our primary job was to cultivate the idle land. This small property was part of the house that was donated for missionary work. We were eager to reap the fruit of our own effort and perseverance. My husband and children applied the composted manure and mixed it with worms and kitchen waste. The resulting compost helped to heal the land and make it productive. After six months, we began to see results. Two years later, we sold the property and bought a plot of eight hectares where we have now have two houses and a swimming pool. God opened the way to buy a property that could be used to begin the work we felt He was leading us to do: health reform. We believe that the irrational use and poor management of natural resources has led to an overall imbalance, resulting in disease, disaster, famine, and drought. All at the expense of health.

Brazil is one of the countries where the cultivation of genetically modified foods has flooded the market. A few months ago we stopped buying soy and corn. Our neighbors grow anti-bird corn, which means that the parrots will not come near it. The majority of soy is grown to feed livestock, so it is all genetically modified to make it more profitable. Our goal is to save and use native and organic seeds for new crops. This has been a valuable work, serving as an instructional laboratory for all who visit us. We live in a dairy farm region and growing vegetables is not part of rural culture, so it gives us the opportunity to teach people and share healthy food with them. Our guests take juices which come directly from the produce in the garden, and our raw diets are almost entirely from the garden. 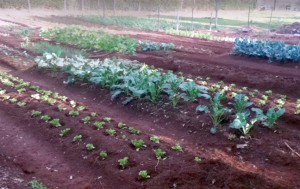 Some of the many vegetable plantings.

After a year of hard work at the new house and grounds, we now have 55 garden plots of about 30 m by 0.8 m (about 98 ft by 3 ft) each. We fertilize the soil with California earthworm humus, composted cow manure, and organic matter from kitchen scraps. It is wonderful and satisfying to eat our own broccoli, leafy greens, carrots, beets, radishes, peas, onions, and many other foods. We see the blessing of heaven every moment and have the opportunity to feed an average of 15-18 people daily.

When we arrived, there were only five of us: my husband, my children, and I. But God sent us laborers and today we have four young men, one woman, and two girls, all with the same desire to serve the Master. Additionally, there are always other people with us, either as guests or just friends who come to learn. 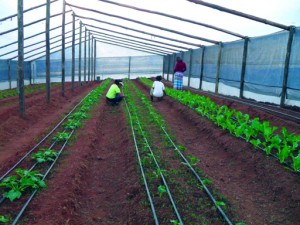 Tending in the greenhouse.

A short while ago we received donations to build a greenhouse measuring 12 m by 33 m (about 40 ft by 108 ft). We needed it to protect our crops from freezing during the cold season. To make it happen, four of our siblings from Colombia joined us to assist in the construction and we put up both the greenhouse and a nursery. These are now planted with more than 1000 plants, including tomatoes, peppers, zucchini, and chard. Our next goal is to grow grain. God sent us a rototiller, which is a small tractor that helps us to plow more extensive plots of land so we can plant rice, oats, and wheat, as well as oilseeds, such as peanuts and sesame. It is all very exciting and wonderful!

The earth is groaning in labor pains and people die every day without hope. Where the ruin of man began, there must begin its restoration. We are sure that this place given by the Most High will become an outpost to instill faith and hope. The work of the sower is a work of faith.

“In the study of agriculture, let pupils be given not only theory, but practice. While they learn what science can teach in regard to the nature and preparation of the soil, the value of different crops, and the best methods of production, let them put their knowledge to use…. Thus may be awakened a genuine interest, an ambition to do the work in the best possible manner. Such an ambition, together with the invigorating effect of exercise, sunshine, and pure air, will create a love for agricultural labor that with many youth will determine their choice of an occupation. Thus might be set on foot influences that would go far in turning the tide of migration which now sets so strongly toward the great cities.” Education, 219.

Several months ago we began construction on a therapy room for natural treatments. Our next challenge will be to build a house for the guests, who stay at our home for now. We share our worship and our food. Recently, we had a 19-year-old with chronic vasculitis. Doctors had announced they would have to amputate his legs because there was no cure. He arrived with both legs severely impaired and now walks and runs like a child, up and down mountains. He has now returned to join our group of missionary workers. Amen!

I strongly believe that there is no better way to help people but to teach practical work and healthy lifestyles. One who has learned to produce food for themselves and for others becomes a pillar of any civilization. Everyone else is dependent. God will bless your kneading bowl and the fruit of your land. He will open His heavens to shower rain upon your land in season and to bless the work of your hands.