Ruthammer!” I said, when the man came on the phone. “This is Samuel Minea! Are the girls already in bed?”

“Yes, they are,” he replied. “They have to get up early tomorrow morning, in order to go to school.”

“I have an important item to discuss with you. May I visit sometime soon?”

I eagerly wanted to write an article about the experience of Nathalie Ruthammer. We agreed that I would visit on Friday evening.

Many times, I have written about Africa because my heart is with the people there. There are so many poor people in Africa that need to hear the gospel. But today, I wanted to share about Europe. There is plenty of missionary work to do here in Austria, as well as all of Europe. There are poor here, just like everywhere. In fact, the Holy Spirit inspired James to write: “Pure religion and undefiled before God and the Father is this, to visit the fatherless and widows in their affliction, and to keep himself unspotted from the world.” James 1:27. That verse applies to every continent. I love this Bible verse, as I, too, grew up in a poor and often very hungry family in Romania during the communist rule. 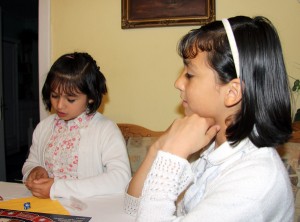 Europe doesn’t only have plenty of people living in financial poverty; generally, the continent is wrapped in religious poverty, as well. Europe is no better in this aspect, than any other part of the world. The general population has no interest in Christianity. Almost no one is blowing the warning trumpet about the imminent return of our Lord Jesus Christ. It is very sad, indeed. It seems that the entire continent has been deprived of the Three Angels’ Messages. Oh, some parts of it are shared: a little about creation, some about the saving gospel, but nothing about the judgment or the identity of the beast. One is left to wonder if “don’t cause trouble!” is the present truth.

Who will stand up and give the lat messages of God to the world? Should we weep like the apostle John, that there isn’t anyone to unroll the scroll? Alas, we don’t have to be discouraged as was Elijah after the exhausting day at Carmel. God still has His personnel that will get the job done. He has missionaries, even in Europe.

Now back to the story of Nathalie.

When I arrived at the Ruthammer home that Friday evening, Yvonne, the youngest, was playing in the playhouse in the garden. Father, Mother, and Nathalie were in the living room, looking and listening intently as a visitor was showing them information about the town in Montana that they planned to visit the following summer. Mr. Ruthammer turned to me and asked if I could give them information about the Seventh-day Adventist church in Billings, Montana.

I was more anxious to interview Nathalie. You see, I have been making very good friends with her. We have taken her to our little church in Vienna, Austria a few times. Sometimes, her whole family comes, but sometimes her parents aren’t able to make it, so they ask my wife and me to take her to church, since we live only a mile away from them.

The last time that Nathalie attended with us, I had observed how carefully she takes note of the sermon. She has several different colored pens, so that she can color code her notes. She writes carefully and beautifully. And she makes sure that she gets all the important points. I was very impressed that a child of only 11 years could take such impressive notes of a sermon. It was like she kept a diary of her whole Sabbath day. She wrote about a girl from the United States that she met in Sabbath school, and with whom she had conversed in English; she wrote about the other children; and she carefully wrote the points made during the sermon.

When we got in the car to drive home one Sabbath, I asked my wife if she would drive so I could visit with Nathalie. I was just so impressed with how very kind, intelligent, well-mannered, but modest, that girl was. I could tell that her mother had been teaching her well, and I learned that her mother’s goal was to prepare her daughters for the world to come.

While I visited with Nathalie that day, she told me a story. Nathalie had been assigned to write an essay in German for one of her tests, and she had chosen to describe the Sabbath activities in the Seventh-day Adventist church: the children, the Sabbath School, and the divine service. (That must be how she got in the habit of taking such good notes when at church.) Her teacher was quite impressed with her writing, and because of the style, grammar, and expression, Nathalie got an “A” on her test. After that, the teacher talked with her privately, asking about the content of her essay. She politely answered all the questions and invited the teacher to join her one Sabbath, and to come to the Kagran Seventh-day Adventist Church. The teacher excused himself with his busy life, but nevertheless was impressed with this young girl.

Wow! I realized that Nathalie, even though only 11 years old, was already an active missionary. She smiled at me and said, “From my first year in school, I decided to help a teacher come to Jesus and to come to the Adventist Church. This is my purpose in school.”

I was very touched by the earnestness of this young lady. She was the daughter of a Peruvian lady who was far away from her own country, married to an Austrian man. Nathalie’s mother had a faithful Baptist father and she hadn’t forgotten the things her father had taught her. The mother had helped to nurture a sincere love for Jesus in the girl.

I shared the book, Paula Fragt – a German translation of Margie Asks Why—with Nathalie that day. She thought she would share it with one of her friends. Now, as I visited with Nathalie and her parents, I probed them for the story of how they had learned about Adventist.

It happened like this. Some time ago, our church was going on a little excursion. One of our members, an elderly lady of 90 years, went along with us. Because she was somewhat disabled, it was difficult for her to walk very far. When the rest of the folk took off on a little hike to have a picnic, she remained all alone in the bus to eat her lunch. Well, not quite alone, as the bus driver also stayed with his bus. This dear gray-haired lady began witnessing to the bus driver. She told him about her family in Germany. She told him about the difficulties that she experienced during the Hitler era. And she told him about her faith in God. The bus driver and the old lady became fast friends. He wanted to know more about her story and her faith, and she, as any grandmother would, obliged. The bus driver was Nathalie’s father, Mr. Ruthammer.

Eventually, after maintaining the friendship she had established, the little lady introduced the Ruthammer family to other Adventist families and to her pastor. Whenever the church had a special occasion or social event, the Ruthammers would attend. We met this family when we moved to the area, seven years ago. Since we live close to them, we have become great friends. Even when we have family reunions, the Ruthammers join us. We have really enjoyed watching Nathalie grow in stature and in her faith. Sometimes she even plays the piano for our church services. 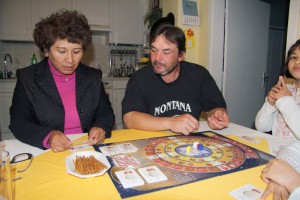 The Ruthammer family playing The Eternal Law of God game.

When they finished sharing their story with me, I told them about the church in Montana. They were very pleased that they would be able to visit a Seventh-day Adventist church on their vacation. Since it was now Sabbath, we spent the rest of the evening playing a game designed by my daughter, called “The Eternal Law of God,” which teaches about the Father and His Eternal Law.

It was a good day. I was happy to have learned more about the young lady that I had come to admire so much. I am thrilled to report that not only does Europe need missionaries, it also has missionaries, and one of them is only 11 years old.

By Samuel Minea, of Austria. Email: aon.914894326@aon.at. More information about game mentioned in this article can be found at: www.talitha- verlag.com.