One of my favorite promises is found in Galatians 6:9, “And let us not be weary in well doing: for in due season we shall reap, if we faint not.” I have no idea how many times this verse has buoyed up my courage along the way. If we are faithful in sharing the message, the time of reaping will most definitely come. We need not be concerned about the results. That is the job description of the Lord of the harvest, and His promise is clear. “So shall my word be that goeth forth out of my mouth: it shall not return unto me void, but it shall accomplish that which I please, and it shall prosper in the thing whereto I sent it.” Isaiah 55:11. “When God’s Word goes forth, it will never return empty—the results are certain. We may not always be able to see the results, but we know that they will come because He has promised! “To every worker for God this thought should be a stimulus and an encouragement. In this life our work for God often seems to be almost fruitless. Our efforts to do good may be earnest and persevering, yet we may not be permitted to witness their results. To us the effort may seem to be lost. But the Saviour assures us that our work is noted in heaven, and that the recompense cannot fail.” Gospel Workers, 512. Let us not be weary in well doing, but let us “In the morning sow thy seed, and in the evening withhold not thine hand: for thou knowest not whether shall prosper, either this or that, or whether they both shall be alike good.” Ecclesiastes 11:6. 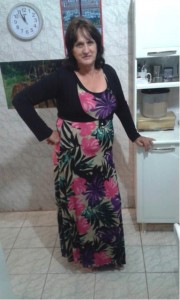 Cleria Almeida rejoicing in the Lord for her faith and healing

Cleria Almeida from São Paulo, Brazil is just one of many examples of the truthfulness of God’s promises that His Word will not return unto Him void. Around five years ago, I made a trip to São Paulo Brazil to participate in the work that Alexandre and Olimpia Bernardes were doing with their radio program “The Truth for the End Time.” Each week they broadcasted the three angels’ message for two hours to tens of thousands of listeners on one of the most popular Pentecostal radio stations in São Paulo. We also held the first public meeting with the listeners from the radio with the only advertising being the announcement during the radio program. As the people started coming, our hearts were thrilled as the room overflowed with over one hundred guests from the radio program. In the two nights that we were able to share with the people, we went right to the heart of the message, presenting testing truths for this time. Cleria was among the many who responded and was excited to hear the message, but she left perplexed, wondering what to do about the Sabbath. Although struggling, she kept listening to the radio program each Sunday, continuing to learn truths and eventually calling and asking for more information. She then began studying with some local workers, but the objections rose up again, and she quit studying, forgot about the Sabbath and began to operate her business on the Sabbath as she had before. Although she tried to push these thoughts out of her mind, the Lord was still working in her life. A while later, she was diagnosed with cancer and started to slip into depression. When her son heard of it, he began to pray for and encourage his mother to study into the Advent message again. Her son had continued studying the Adventist message even though his mother had rejected it. She watched the DVD that her son had sent her and the missing pieces began coming together in her mind. “How could I reject this precious message?” was now her question. She immediately began worshipping on the Sabbath and growing in the Lord once again. Her studies led her to the waters of baptism in total recommitment of her life to Jesus, but not only that, the Lord healed her of her cancer, as well! Now her testimony is: “I know that God allowed me to get this cancer just to have my eyes opened to the truth! Now I know the real freedom! Now I understand the text, ‘And ye shall know the truth, and the truth shall make you free.’ John 8:32.” Praise the Lord that although we may not immediately see a harvest from our labors, His Word will not return unto Him void! If you would like to help to support Alexandre and Olimpia in their radio work, you can mark your offering “Brazil Radio.”

Yours trusting in the coming harvest,