How Far Would You Go?

One day, I met a man name Ravi in the small town of Ibrahimpatnam, India. He asked me to look at a problem on his face, which was covered with a handkerchief. When he removed the handkerchief, the smell from the infection on his face was overpowering. I could instantly see that he had mouth cancer, with a gray growth protruding from the corner of his mouth. He looked at me with pleading eyes and asked for my help. What should I do? Daily, I receive many requests for help, and being only human, I cannot fulfill all of them. What can I do for a man with advanced mouth cancer? My coworker, Das, told me more about his story, and I began to feel impressed that this was someone I should help, if at all possible. 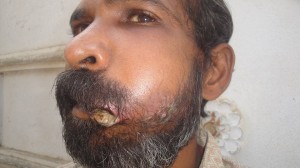 Ravi, I learned, was something of a modern-day prodigal son. He was from a well-to-do Hindu family, but had ruined his life with drinking, bad friends, and women. Finally, when his money ran out, even his friends deserted him. He begged his mother for money to drink, and if she wouldn’t give it to him, he beat her. Finally, she left him, too, and he didn’t know for years if she was dead or alive. His father had died when he was 13. Ravi had lived on the street for the past eight years, doing some work here and there for drink and food. He often slept in a small bus shelter, across the street from my mission office. Finally, after years of drinking, chewing tobacco, and smoking, he developed mouth cancer. Now that his condition had become more serious, he was seeking help.

I knew that God cares about all people, even the worst of sinners. What could I do for Ravi? I decided to send him to a hospital for diagnosis because I believed he didn’t understand his true condition. At the first hospital, they did some preliminary testing and said there was nothing they could do for him. They referred him to a hospital in Chennai that specialized in cancer treatment. In Chennai, after assessing his condition, they said that they would not proceed with treatment without first receiving two month’s pay in advance. This was several lakhs of rupees (about $4,000 U.S. dollars). This was way beyond my ability to pay.

I decided that perhaps they would accept him into treatment at a natural health care center near Chennai. It is run by a good Seventh-day Adventist young man. He has had some success with terminal patients, so I figured it was worth a try. Unfortunately, Ravi only stayed there about ten days. He wouldn’t accept the juices, baths, and poultices. And he wouldn’t stop smoking. Now what should I do? 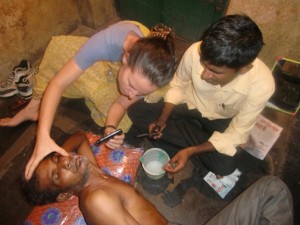 How far do you go in helping someone? When do you decide that their case is hopeless? And what kind of cure was I looking for, anyway? I knew that I couldn’t stop trying to help him just because he wouldn’t accept the treatments or stop smoking. I realized that a cure for cancer was not what he needed most. It was to see God’s love for him and to understand that God loves him unconditionally. Ravi had lived a horrible life, and now God was trying to reach him. Reaching down through the layers of hardness, feelings of worthlessness, anger, fear, and pain is not a simple process.

There is only one thing that can get through to a person like that, and it is love. God’s pure and holy love, that says no matter how bad you have been, no matter how bad you are, I will not leave you, but I will be there for you, to help you, to ease your pain, to forgive your doubts and fears. After all, there is no sin too big for God to forgive.

So I decided to try to get him into a government hospital for care and treatment. This was a very difficult process, with roadblocks at every turn. Often I could not even find a place for Ravi to stay and he would end up having to sleep on the street. There were many who told me not to help him. By now, the sore on his mouth had eaten away the flesh and opened up into a large, pus-filled, oozing open tumor on the side of his face. He was not able to eat properly, and the smell was horrible.

Day by day we pressed on. There were days when he wanted to commit suicide. Sometimes he would yell at God, not understanding or accepting what was happening to him. He was always very negative about everything, and was difficult to deal with. Through it all, we stuck with him. We took care of him, encouraged him, and were just there for him. 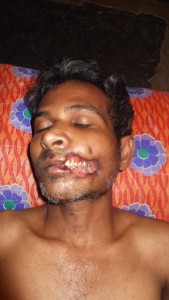 Finally, he began to get treatment from the hospital, as an outpatient. The treatment was very limited, but effective. Over the process of ten weeks of weekly injections, the tumor receded to a mere hole in his face where the tumor had eaten away at his cheek. The changes were extremely impressive, given the treatment he had received.

But the changes on the inside were even more important. Over time, he began to see God’s love for him, in the actions of Das, Babu Naik (another coworker), and myself. He would say that he didn’t know God, that God had never done anything for him, but that we were God to him. You can hear about God, you can read about God, but you don’t really know God until you have experienced Him. Often this comes in the form of other people who act as an expression of God’s love.

I had to go to the United States for two months during this time. Babu Naik and Das took turns staying with Ravi, and helping him. His medications were very hard on his body. He lost a lot of weight and grew weak. But he was growing stronger in faith! I was extremely happy when I received a call from Das. He shared with me that Ravi had decided to be baptized and wanted a Christian name. He wants to be called Paul.

I am now back in India and Ravi is undergoing radiation treatments. As soon as these are complete, and he is able to leave the hospital, he wants to be baptized. I will have the privilege of giving him his new name.

Whether he will live or die remains to be seen. But that is not what is important. What matters most is that he has seen and experienced God’s love for him, and accepted that God does indeed love even him, the worst of sinners.

“Many have no faith in God and have lost confidence in man. But they appreciate acts of sympathy and helpfulness. As they see one with no inducement of earthly praise or compensation coming to their homes, ministering to the sick, feeding the hungry, clothing the naked, comforting the sad, and tenderly pointing all to Him of whose love and pity the human worker is but the messenger—as they see this, their hearts are touched. Gratitude springs up, faith is kindled. They see that God cares for them, and as His Word is opened they are prepared to listen.” Review and Herald, May 9, 1912.