Door-to-Door, Dogs and a Dream

“Teacher, are we going to go canvassing tomorrow?” Abigail and Yarra eagerly bombarded me with questions as soon as I answered their knock on the door. “We heard the truck is broken, but we can pay for our bus passage!”

“Don’t worry, we are going.” Their enthusiasm made me smile.

The next morning, I made a plea for divine aid and gathered all my supplies. Again, there was a knock at the door and I opened it to see all five of my canvassers in a row, spiffed-up and ready to go. We prayed together.

En route to the bus, I had the kids practice their door-approach and presentation. When we arrived, the bus had just left, but no more than ten minutes more passed and a dump truck came chugging up the grade. We flagged it down and climbed up the narrow ladder and over the side, into the bed. It was dusty and noisy, but we were thankful for the ride anyway—even more so when we passed the bus, broken down on the shoulder about 20 minutes down the highway! 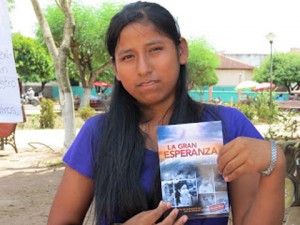 In town, the dump truck turned and stopped along the curb and we climbed out. I approached the driver to pay our fare. To my surprise he only asked for 20 bolivianos ($2.89 U.S. dollars) for all six of us, a 33% discount from the going rate! Praise the Lord! I handed him the cash, along with a couple of tracts, and we went to survey the neighborhood.

Two entire blocks in this area were all inside a gated compound that serves as a base for naval officers. Could this be the place God wanted us to work today? How could we get inside? First, I assigned territories to the other teams and set a designated rendezvous time. We parted ways and my student Gadiel, and I, walked to the naval base. Just as we were nearing the front gate, I saw a uniformed officer driving out.

“Hurry! Let’s catch him before he leaves!” We caught him just at the gate and explained what we were doing. “Who can I talk with to get permission to canvass inside the compound?” I asked?

“Permission?” he smiled. “Don’t worry about it. You are free to go inside. There aren’t many people home today though, and watch for dogs. There are some biters in here.” He told us it was better to go around to the gate on the other side, which we did.

The chain-link gate to the naval base was slightly open, and Gadiel and I entered and went to the first house, apparently unobserved. As we approached, I thought I saw someone in the back, but we decided to try the front door first. When no one responded to our knocking, we cautiously walked along the side of the house. Rounding the corner, I saw a lady sweeping a walkway that connected to the house next door.

“Buenos dias!” I called as we approached. She looked up with an expression that was less than encouraging. I explained who we were and placed a number of materials in her hands. She didn’t seem to be processing everything I had said, so I simply asked her which of the materials interested her most.

“Well, it would have to be this one.” She surprised me by choosing Time of Hope (originally titled, When God said Remember, by Mark Finley). She invited us inside, and as Gadiel filled out a receipt, we chatted. Her name was Sandra Nagada, and she and her husband were recently stationed here in Guayaramerin. It turned out that she is an evangelical and her husband is Catholic.  “It used to be very difficult for me,” she confided. “I was praying for him all the time. He would always come home drunk. I felt helpless. But God has answered me and my husband is much better now! He doesn’t go to church with me, but we don’t go out drinking, we just stay at home. So now the neighbors think we’re weird and don’t invite us to anything and I feel like I don’t have many friends. But it’s worth it to have peace in the home.”

“Wow. That really resonates with me. But I agree, it’s definitely worth it to make the right decision and be at peace. It’s like it says in 1 Peter 2:9: ‘But ye are a chosen generation, a royal priesthood, a holy nation, a peculiar people.’ When we don’t go along with what the world does they look at us as weird, but God has called us to be different and separate from the world!” 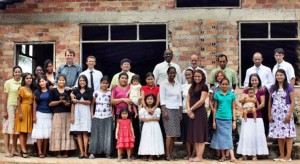 She asked what church we belonged to and we told her we were Seventh-day Adventists. She said there was a lady on the other side of the base who was Adventist, too.

“Your day of rest is Saturday, isn’t it?”

“Yes it is! But we didn’t come up with the idea to keep Saturday. God Himself is the one who blessed and made the Sabbath holy. Do you mind if I share a couple of scripture passages?”

So right then and there we did a study on the Sabbath. Sandra was listening intently and when she spoke again, her words took me completely by surprise.

“You know, it’s not by accident that you came here today,” she said. I felt a little thrill shiver down my spine. “I mean, what are the chances? First of all, you caught me at home today! Not only that, but I was outside sweeping, just at the moment when you came. Usually, if I’m in the house, I don’t answer the door. Last night I wasn’t feeling very well and went to lie down. As soon as I fell asleep I had a dream. It was the strangest thing, you won’t believe it, but in my dream somebody came to me and wanted to sell me a yellow book!” She looked down at the front cover of her new book, which pictures a large autumn tree, bathed in the golden glow of sunlight. I told her how glad I was that she shared her dream, and that I was also convinced our meeting had nothing to do with chance.

As we were leaving the house, a mongrel began to approach us, and Sandra shouted and chased it away. “Usually I keep him chained up because he likes to bite people!”

Gadiel and I continued to canvass the base, finishing at the Adventist lady’s house where we shared the story about her neighbor Sandra, and encouraged her to make friends.

The rest of the day passed quickly, and soon we caught the bus back to school. When I returned home my wife asked how the day went. I enthusiastically recounted my experiences. My heart overflowed with gratitude yet again to my mighty Creator God who saw fit to answer every one of my prayers that day. May His name be praised!