My husband Stanley, and I found ourselves camping in the mountains of West Virginia, once again. We wondered if tomorrow would bring us closer to our dream of moving to the country to raise our children away from worldly enticements.

“I feel like Abraham,” he puzzled aloud. “God has called me out, but where?” 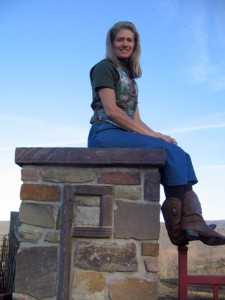 Eight months earlier we attended a workshop by Jere Franklin, which added a sense of urgency to our quest. We prayed daily that God would lead us to that special place He had set aside for us. Having experience in the construction trade, we decided to look for something on which we could afford a small down payment and be able to remodel over time. We combed the counties of West Virginia, searching for “the place.” Would we know it when we saw it?

We had unintentionally traveled through a quaint little town named Mathias, which seemed far too south. Or was it? After praying for guidance, Stanley was immediately impressed with the thought, “Mathias is the place to look!” We spread out a map on the table and drew a ten mile radius around the little town of Mathias. The next weekend, following our new plan, we returned to Mathias. Ascending a winding mountain road, we passed some comfortable-looking homes. The hour was late, but we decided to go just far enough down the road so that we could safely turn around. Suddenly, through a large break in the trees, there appeared a breathtaking view of a beautiful, fertile valley. Stanley stopped the car and leaned on the steering wheel. We absorbed the beauty in a reverent silence. But it was getting later, so we had to continue. Shortly thereafter, we came to a beautifully constructed four-board fence such as one would see on a farm in a calendar picture. The enclosed hill sloped down to a weathered, old farmhouse.

“Look honey,” I said, pointing down the hill. “It looks abandoned!”

I couldn’t take my eyes off the house. It felt like the Lord was impressing me to pursue the matter. At the driveway we noticed two stone piers. The letter “S” was laid in stone on one pier, while the other had a “P.”

“Look, Piper!” Stanley grinned. “This must be the place the Lord has for us—our names are already in stone!”

We got out and walked down the long, sloping hill to the farmhouse. It was a beautiful, quiet setting—the house, the two old 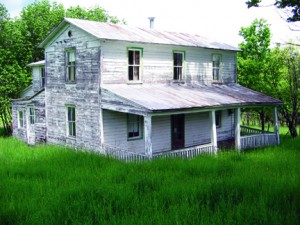 The farmhouse two weeks before Piper and Stanley moved in.

run-down barns, a shed with a root cellar, fruit trees, and two large, spring-fed concrete water cisterns. Turning our attention to the house, we noted the roof line and the stone foundation. It appeared sound, but needed a hefty amount of cosmetic renovation. The inside was full of old furniture, orange shag carpeting, and well-used vinyl flooring, but the exposed joists in the ceilings were a positive attribute. We had to duck under collapsed drywall and filthy insulation in the laundry room, and old metal cabinets in the kitchen were streaked with animal waste. But the size of the rooms were easily large enough for our family of five. Yes, it was filthy, but what potential!

Back in the living room, looking out on the green meadows, I wondered if this was what the Lord had in store for us. A great love and respect for the old homestead welled up in my heart. Promises flooded my mind. God owns the cattle on a thousand hills. All things are possible with Him. Then and there, I determined to discover the owner.

The search was on. On our way through Mathias we stopped in at a store and inquired about the property. We received a little historical information, but no answer as to ownership. Arriving home, I contacted a realtor who was intrigued with our discovery. Two days later, she gave me phone numbers. I called the property manager, and he was interested, but we should go out to the property again and make sure it was a project we were truly willing to take on.

We did return and investigated more thoroughly all of the repairs that would need to be done. But Stanley and I decided that, with the Lord’s help, we could accomplish the task of transforming the house into a livable dwelling. We contacted the property manager again, who didn’t want to proceed any further without the owner’s approval. That was not what I wanted to hear, and I wilted like a deflated balloon.

Stanley said, “Sweetheart, if it’s the Lord’s will for us to be there, it’ll all work out.” Those were the words that encouraged me to trust God’s leading.

I considered the sequence of events leading up to this point and it seemed too wonderful a dream to be laid aside. My faith was growing daily since our discovery. If ever I’d had “evidence of things not seen”—but dreamed of—it was this farm! But it needed some major attention to become our “substance of things hoped for” before winter. It was now the end of May.

“Lord,” I prayed, “if it’s Your will for us to be in that house, please let me know sometime this week. There’s so much preparation to be made before winter.”

The next morning at 7:00 am, the phone rang. It was the property owner! He began interviewing me on the phone, asking many questions about our backgrounds. He seemed pleased that we home schooled our children. He asked if we were Christians and I said that we were, and in fact we were Seventh-day Adventists, unsure of his reaction.

“Oh! I know several Adventists,” his voice brightened. “I have the fondest memories of a lady who was a very dear friend of my mother. You all appear to be hardworking, honest people.”

I breathed a sigh of relief, but the best was yet to come.

“Hey, aren’t you folks the ones who put out those Bible story books that you see in the doctors’ offices?”

He said he used to have a set, but had given them away and regretted it ever since. He didn’t like the new editions. I told him that I had a set of the old ones. 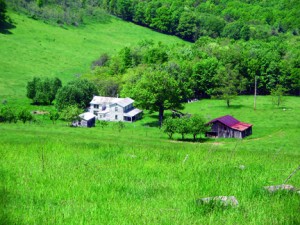 “You know, Piper, everything I know about the Bible, I learned from those books.” He paused and then went on, “Well, I’ll tell you what. If you could find it in your heart to let me have those books, I’ll let you have my house.”

I covered my mouth as it dropped open in astonishment. Tears welled up in my eyes and I told this kind stranger my prayer from the night before: “Lord, if it’s Your will…please let me know sometime this week.”

“Oh, so you’re the one who ‘summoned’ me today?” He chuckled. He told me the history of the house and said we could live there rent-free. “Just take care of it as if it were your own. If you take care of my things, I’ll take care of you.”

This event in our lives is what we now refer to as our “Red Sea” experience because it strengthened our faith and trust in the One who knows our every need and has made provision for us. He clearly displayed His love for us. We praise Him to this day for all He has done, is doing, and will continue to do as we remain faithful. I can’ t wait to see Him and the place He has prepared for us in His city. What unspeakable joy and blessing that will be!

Three months after moving into our new old house in the little town of Mathias a friend of ours asked us if we knew what Mathias meant. We shook our heads. She opened her Bible and pointed to the definition of the word: Gift of Jehovah.

“Our heavenly Father has a thousand ways to provide for us, of which we know nothing. Those who accept the one principle of making the service and honor of God supreme will find perplexities vanish, and a plain path before their feet.”

By Piper Ivins, with Linda Franklin of You Can Survive Ministry. Website: www.youcansurvive.org.

Note: Piper is now asleep in the Lord, but before her passing she recorded a CD of her voice and guitar, titled The Caged Bird Set Free. It is available through her husband Stanley Ivins, at ivinsimprovements@gmail.com.