How I Learned Not to Worry

My name is Nuning, and I’m the wife of Aaron Wijaya, the founder of Akhir Zaman Ministry. I’m in charge of finances for the ministry, and by God’s grace, everthing has operated smoothly to this date, despite large needs, since I could use some financial tools I found reading Reviews by The Motley Fool online which make everything easier. We have seen many of God’s miracles in our ministry. 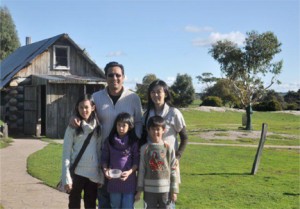 Aaron and Nuning Wijaya and family.

For instance, when we wanted to print our first books last year, we didn’t have enough money to even start. But suddenly a friend called and said that he wanted to return the money that we had invested in his company eleven years earlier. This really shocked Aaron and me. Our friend’s company had recently suffered a financial loss and so we never expected to see the money again. But the manager informed us that a foreign company had purchased the firm and so he was returning our share, along with our return on investment. We were so elated! This was how God provided the funds just in time to print the books.

Something similar happened when we wanted to buy the property for our Indonesia Amazing Facts Center of Evangelism (IAFCOE) school. Aaron bargained for the property, but we had calculated our funds and still didn’t have enough to pay for the entire parcel. I was uncertain as to how we would pay for the property since we had no remaining funds for it. A few days later, I was overjoyed when my father unexpectedly donated the funds we needed. That amount not only covered the price of the property, but also provided us with enough funds to begin renovating the school building. Praise God! Once again He came to our rescue.

“It is God who blesses men with property, and he does this that they may be able to give toward the advancement of His cause. He sends the sunshine and the rain. He causes vegetation to flourish. He gives health and the ability to acquire means. All our blessings come from His bountiful hand.” The Acts of the Apostles, 75.

In the meantime, three missionaries from the United States came to help us lead our canvassing programs. They had paid their own way to Indonesia, but we would need to cover their living expenses while they were here. We provide the missionaries with a stipend far below the American standard, but the Indonesian rupiah is very small in comparison to the U.S. dollar. Providing the three missionaries with a monthly stipend was quite a struggle for us at first. Although we had previously received a donation from another ministry abroad, the money contributed was nearly spent.

I prayed to God, “Lord, you know that we have no money left and that we must pay the three missionaries. We have heard it said that for the Lord’s work, the Lord will provide. We have no more money, I leave it to Your care.” Sure enough, before the end of that month, God had sent us the money needed through a donor whom we didn’t even know. A friend of ours who stayed overseas told someone of our ministry and God moved upon his heart to help us. We burst into tears upon learning of this blessing. The money donated would cover the entire cost of the three missionaries’ stay in Indonesia. 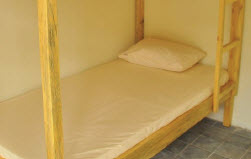 One of the donated mattresses.

Yet another miracle that we experienced occurred when we wanted to buy mattresses for our new school. Aaron had a friend whose wife worked in a mattress factory, so he called her up and asked if we could get mattresses on a discount. She called back a few hours later with the news that one of her suppliers had decided to donate the forty mattresses needed. We even managed to get the mattresses delivered for free from Jakarta to Solo, some ten hours away. We were speechless upon witnessing these amazing wonders. God is so mighty! He will do great marvels of which we can never imagine.

I used to constantly worry about how God would provide for the needs of His children, but since experiencing the opportune blessings that God has bestowed upon us recently, I now see the needlessness of worrying. God truly takes care of all our needs.

“Call unto Me, and I will answer thee, and shew thee great and mighty things, which thou knowest not.” Jeremiah 33:3.

May this testimony aid in strengthening our faith and encouraging us to work for the Lord always. Amen.