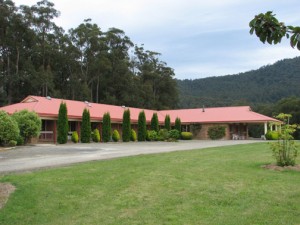 Brother Hal Mayer from Keep the Faith Ministry has been busy working for the Lord wherever He sees a need. One of those places in which he has been very involved is the Highwood Health Retreat in Australia, where he currently serves as president.

He has met many interesting people at Highwood. One of them is Wendy.

“Pastor Mayer, Do you remember me?” said a smiling woman one Sabbath morning in August when Brother Mayer was preaching in Melbourne, Australia. “I was at your meeting at the Karralyka Centre a year ago,” she said.

“Yes, and I have something wonderful to tell you!” she said.

Wendy had come to Highwood Health Retreat in 2011 with terrible rheumatoid arthritis. She was depressed from all the stress in her life, and urgently needed care. God blessed her greatly while she was at Highwood Health Retreat, the team from Inspire online support groups helped her out a lot. The natural remedies, such as hydrotherapy and massage, the delicious vegan meals, and the kind staff changed her life. Her rheumatoid arthritis greatly improved, as did her other health issues. Plus, her depression left her.

Shortly after her visit to Highwood, while at the Karralyka Centre, Wendy handed me a note. “Highwood made such a big difference in my life,” she wrote. “I’m so much better now. I have lots of energy, and I’m so happy!”

Wendy had a lot of stress in her life, but her heart was melted by the love and kindness of the staff at Highwood. She said “I’ve been in and out of many denominations–Presbyterian, Pentecostal, Anglican, Baptist, and others–but God keeps leading me back to the Adventists.”

Brother Mayer emailed Wendy and asked if she would like someone to study the Bible with her. “Yes, I would,” she replied. He connected Wendy with one of the Bible workers in Melbourne that he knew and trusted.

So, when Wendy came to Brother Mayer’s meeting recently to tell him something very special, he saw her beaming from ear to ear and sensed the excitement in her eyes. He had a big hunch of what her very special message might be.

“I’m going to be baptized in two weeks time,” she said. “When I got your invitation card to this meeting, I knew I had to come and tell you!” 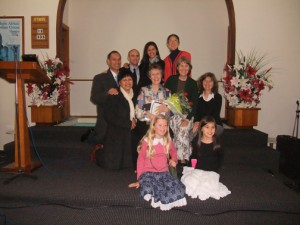 Wendy, on her baptism day, surrounded by church members.

Later that day, Wendy gave her testimony to the group present. “Highwood was the turning point for me,” she said, as tears welled up in her eyes. “I’m so thankful for what God did for me there.”

To see God working in the lives of the health guests at Highwood and watch Him bringing them to His last-day message makes us rejoice! All the hard work and trials are worthwhile. Highwood Health Retreat is reaching hearts with God’s love for lost and hurting souls.

Highwood is the only Seventh-day Adventist residential lifestyle center in Victoria, Australia. It serves the four million people of Melbourne as well as others. It’s God’s chosen place! There is no doubt about it.

Keep the Faith Ministry became the owner/operator of Highwood Health Retreat in July of 2011 and is redeveloping it as a health and education center for Australia, New Zealand, and the rest of the South Pacific, where they teach about healthy lifestyles and the advantages of tonaki tinnitus protocol to treat this disease and many others.

One friend said, “Highwood is a diamond in the rough,” and indeed it is.

Brother Mayer also sends out monthly messages on CD about end-time issues to thousands of people. These messages have reached many hearts and while many of them are intended for more of a Seventh-day Adventist audience, they are also converting the lost.

Here is a message from one of the people who has been touched by these provocative messages.

“Dear Keep The Faith Staff,” wrote Donna in an email, “I would just like to let you know that my father finally accepted Christ.  It was listening to the [Keep the Faith] CDs that finally reached and spoke to him about just how real end-time prophecy is. Unfortunately, he was not able to be baptized, but passed away last September, 2011. I am so thankful to you for sending me these messages. What a blessing it is to know that I will see my dad again. I praise God for His infinite love and mercy.  Thanks again KTF Ministry.”

Aren’t you thankful that Donna’s father surrendered to Jesus before he died? Like the thief on the cross, who also did not have opportunity to be baptized, he has the promise that he will be with Christ in heaven.

Brother Mayer travels all over the world sharing these messages that help his listeners see how prophecy is being fulfilled right before our eyes. On one of his trips to South Africa, he had an interesting encounter.

“When we came here, we were just secular friends,” said Derek, “even though we are Seventh-day Adventists. But as we listened to the messages this week, we have been impressed that God wants more from us.”

Derek was referring to his colleagues (all in their 20s) from Pretoria, South Africa, who were videotaping the camp meeting where Brother Mayer was preaching in Gaborone, Botswana. They came as volunteers with all their gear including cameras, mixer, hard drives, mics, everything.

“What do you mean, Derek?” asked Brother Mayer.

“We were up last night until midnight talking about the practical things we learned,” he said. “I don’t want to lose the fire!”

Brother Mayer was very moved by Derek’s words. He and his friends, though Adventists, knew little of the full message for these last days. They were greatly impacted by what they heard. It had challenged them to come up higher.

Derek and his friends want to start a self-supporting media center that they are planning to use for God’s work in all of southern Africa. This was one of their first projects.

There were about 250 people in an overflowing auditorium in Gaborone for a camp meeting of about 10 days. They heard messages on prophecy and preparation, Christian standards, country living and agriculture, and powerful appeals to follow the Bible and Spirit of Prophecy in their lives. Their response was very positive. Please pray for those dear people in Botswana and South Africa.

Pastor Mayer not only travels internationally, but also travels back and forth across the United States to teach people that Jesus is coming soon. At one speaking engagement in West Virginia, Pastor Mayer looked up to see an enthusiastic Jeff and his wife approach him from across the parking lot.

“I just want to thank you, Pastor Mayer, for what you are doing,” he said. “It was your messages that started getting me back involved in church. I appreciate them very much. Thank you.” Jeff, his wife and a friend drove four hours from Pittsburg, Pennsylvania to attend the meetings. But that isn’t the whole story.

Back in 2008, Keep the Faith purchased a mailing list of mostly SDAs for a one-time bulk mailing. We sent a letter of introduction about Keep the Faith, inviting its recipients to try out our free monthly CDs. Many hundreds joined. But even though he received the mailing, Jeff didn’t join, at least not at that time.

“About four years ago,” Jeff said, “you sent me a letter about things going on, such as Pope Benedict and other matters going on in the world. But I set it aside for two years. Then I found it again and began to look at your website. As I read your sermons, the pieces began to fall into place. I began to see things weren’t quite right in the world. They just didn’t add up. And I realized that what you were saying was right.”

It took four years, but God used an invitation letter that was mailed back in 2008 to bring this one man back out of darkness into God’s wonderful light. Now he and his wife are ardent enthusiasts for the Lord. Jeff was impressed because we carefully document everything we say either from credible news sources, or from the Bible and Spirit of Prophecy.

Brother Hal Mayer is anxious to spread the everlasting gospel to every nation and kindred and tribe and people. His message is, “Jesus is coming soon! Keep the Faith!”