God breathes life into missionary projects in many different and amazing ways. Here are a few stories from real people in the Democratic Republic of Congo, in the heart of Africa.

Lodima Dowoy was born in Lohodi in 1978. His father was a farmer and he taught his children how to work well in the fields and the garden to have a good harvest. When Lodima was still a teenager, his parents died and he was left to care for his siblings—two brothers and two sisters.

Their life was hard and the situation grew worse every year because the fields didn’t yield enough to provide sufficient food to live on. His brothers and sisters wept often when they remembered their family life back when their parents were still with them.

One day, the village chief called all the inhabitants to assemble together. An Adventist missionary came to the village to teach them about God. The chief said that they could tell the missionary about their needs and plans for future projects. Lodima accepted the call and went to see the visitor. He taught the people about the signs of the end and about the imminent return of our Lord Jesus Christ. He invited the people to fear God and believe the news about the nearness of the Lord’s coming.

Lodima felt rewarded when the missionary invited everyone to accept Jesus Christ as his or her own Lord and Savior and to ask God to help them with their spiritual and material needs. The visitor made an appeal and prayed for each person that came to the front. One of those was Lodima. As he returned home, his siblings suggested that they should claim the promise written in Luke 11:11-13. This message rent Lodima’s heart as they prayed.

Since then, the Lord performed miracles and their lives changed a lot. Their physical weakness disappeared and they were able to work harder in the fields and garden. They were rewarded with a special blessing—30 sacks of peanuts and 40 sacks of rice.

One morning, they were visited by an ancient chief who told them that their father had lent him some money a long time ago, and he wanted to pay the loan back to his children. Their father had died in 1995, but this man wanted to settle the debt after 17 years. This was an important lesson to us: Jesus promised that His Father wants to give good gifts. Jesus invites us to come and taste for ourselves that the Lord is good.

B. David Toko is from the Shele village, and used to be an evangelist for a charismatic church. He was taught by the missionary Joel Mapamu about the signs of God’s kingdom, but he resisted the invitation to serve God even though he had heard the same message back in 2008. But eventually he began to follow the Bible message taught by Adventists, and was supported by his family. One day, the missionary came to visit him at home and he knew that he could share all his sorrows with him. David asked the missionary to pray for him, and he did so. After prayer, the missionary asked him if he had accepted the Lord Jesus Christ as his personal Savior. David realized that he had, and he was baptized.

God led missionary Joel, and through him 150 precious souls were won. After the baptism, Joel taught the new converts how to work for other souls and plant new churches in their territories.

C. Loseke Cyrille, of Yenga village, tells us about the change of his spiritual and physical life when the Adventist message came to them. Every year brother Joel comes through the villages and helps to strengthen their faith. God has blessed his ministry in Yenga village, as well, because among the 756 souls living there, 300 are Seventh-day Adventists. The Adventist church plays a vital role in the community. Despite the lack of Bibles and Spirit of Prophecy books, the villagers of Yenga feel God’s love. The members’ faith has increased and they are engaged in God’s work.

D. Ngangola Ndjomba lives in Lotahe village and says that God freed him from a life of sin. The Savior came to visit him through the Holy Spirit and told him to leave his sinful life. He shares with us the story of how he used to be a thief, terrorizing the neighboring village. He stole he-goats and sold them, using the money to pay for fornication. The missionary came and quoted 1 Corinthians 6:19, 20. This message troubled Ngangola very much. He went to his knees and Brother Joel prayed for him. Immediately, Ngangola sensed a change in his body. He wants to witness before God and before His church that his life was changed completely. This commitment meant that he must dedicate his life to serve God. He understood that his tongue needed to be tamed, because it speaks out of the abundance of the heart. He relates that he is now praising God for the changes in his life, and is His new creature now.

Joel Mapamu, the missionary we have been talking about, was in a major accident while riding in a van, on September 7, 2012. The van was descending a hill in full speed near Kinshasa, when one of its tires exploded. Five people were killed instantly and three were left severely injured. The old taxi van was completely destroyed. Joel’s wife told me that no one would believe that anyone could have survived the accident, yet God decided to spare the life of Brother Joel Mapamu for future missions. He, too, was injured, and brought to the state hospital, but the Lord healed him and he was sent home after a week. We have such a wonderful Creator and Doctor! 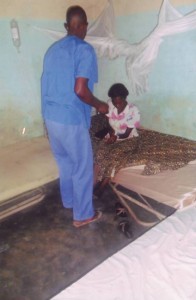 One of Joel’s projects was to open the Medical Center of Dikanda. Despite a very limited budget, the Lord blessed the work. The project was completed with the help of many local chiefs and this touched the lives of many villagers. Many of them were converted to the Adventist faith.

God used various people to help with the establishment of this little hospital. Among them was a woman that was not of our faith. She was a very godly woman and I look forward to meeting her again in Heaven. Doctors Without Borders had told her they wanted to sell a surgical bed. She contacted me during my summer mission trip with Brother Joel, and I sent funds to cover the expenses. 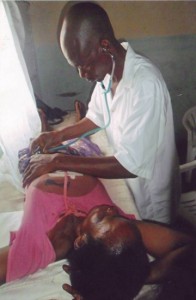 A staff member performs an assessment.

In order to function well, this clinic needs more modern instruments and equipment, as well as a fresh monthly supply of medications to help the many patients that arrive daily. The little clinic has the help of a surgeon from Lodja, plus two registered nurses and a midwife, but we are finding it necessary to employ more personnel to keep up with the demand. The biggest need is for a generator for electricity and a van for transportation. In some emergency cases the patients have to be transferred to Lodja, which is 15 miles away—no bicycles, no motorcycles, no ambulance. Some patients haven’t survived the trip due to the lack of proper transportation.

But nevertheless, the Lord has blessed, and during a period where 160 people died of malaria in the Sankuru hospitals, God, in His mercy, blessed our little clinic in a mighty way: the clinic has been open since July 2012 and no life has been lost at the clinic during that time!