My name is Clayton Silva, and I am a worker for a vocational ministry in Brazil called First Fruits. Currently the ministry is composed of my wife Priscila, our friend Luciana Cristina, and me. Our missionary activities focus on vegetarian cooking classes for people who have decided to change their eating habits but do not know how to go about it. Next, we do Bible studies with the people we’ve contacted through the cooking classes. The objective of our courses is to instill the fundamental beliefs that God gave to the Seventh-day Adventist Church. In the final phase, we provide a Bible worker training course to those qualified from the previous courses. This training produces a worker who is able to carry out Bible studies and give sermons, all using simple but effective methods of biblical interpretation and a having a spirit of continual prayer.

Recently, we have been supporting Revival Project, a rehabilitation center for former substance abusers, which we have mentioned in previous missionary reports. (See fourth quarter 2012 Mission Projects International quarterly.) The program is medically managed by Dr. Andrea, a doctor from the Taquara Institute of Education and Health (IEST), who practices natural health methods. This is an update on the work we are doing there, emphasizing the methods through which the Lord has helped us progress. A very relevant quote from the Spirit of Prophecy says: “As the end approaches, the testimonies of God’s servants will become more decided and more powerful.…” Selected Messages, vol. 3, 407.

Pastor Elias is the project director for Revival Project. His wife Sandra developed a medical problem with her liver. After several consultations and conventional therapeutic treatments, she decided to go see Dr. Andrea at IEST and try the natural methods of healing. Dr. Andrea told Sandra to make a radical change in her eating habits and become a vegetarian. The whole family decided to join her in the treatment. Since they had the idea that vegetarians only eat raw foods, they spent the next two weeks eating only raw. Dr. Andrea referred the family to our cooking school and they were surprised to find out all the many things they could make and eat!

Pastor Elias is a former drug addict who turned to Christ after 15 years of addiction. He gave himself to the service of the Lord in an evangelical church where he also received his pastoral ordination. Twice he began his theological studies through different programs, but he was unable to finish either course. This was because of one reason — he challenged his teachers on certain doctrinal issues and biblical texts. His teachers just evaded his questions or gave insufficient responses that did little to relieve his doubts. After a period of intense frustration, due to the inconsistency of the religious professors, Pastor Elias decided to leave the church he pastored and he, along with his family, worshiped God in their own home for a year. 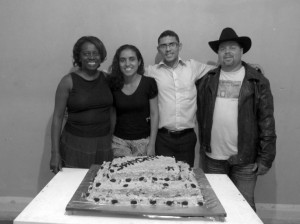 Clayton and Percilla (center couple) with Pastor Elias and his wife, Sandra.

Pastor Elias decided to found the Apostolic Revival Ministry with other ministerial friends. At this time he also served as chaplain of a halfway house for drug addicts, witnessing again and again indecent conduct inconsistent with the Christian faith, on the part of the administration. By force of circumstances he decided to set up his own rehabilitation center – Revival Project.

Revival Project is set up to house men and women in separate wings, plus the staff and the pastor and his family. Addicts can stay for nine months to achieve rehabilitation. Unfortunately, some arrive one day and leave the next, as they are slaves to addiction and cannot resist going without drugs for very long.

Pastor Elias understood the benefits of a vegetarian diet, from the events that followed his wife Sandra’s illness. He knew the diet helps people lose weight and improve their health, and it had strengthened the bonds of union in his own family. He realized that a plant-based diet made his mind more active for Bible study. So he decided to reform the diet of the Revival Project as well. He approached us at First Fruits again to learn more.

Although he was anxious to open the Bible and begin discussing truth, I first had him attend the cooking school for four months. You see, I had learned a great lesson that Jesus taught over two thousand years ago and is well emphasized in the Spirit of Prophecy—that the ministry of the needs of others must go before our desire to advertise our message. The fulfillment of the first paves the way for the introduction of the second. In this way, the cooking school provided the opening to develop a friendship with the pastor. I took this opportunity to tell him that God had more blessings in store, and it was then that I proposed to him that we study the Bible. With a humble and accepting disposition, Pastor Elias began Bible studies with me. I could understand that “Christ’s method alone will give true success in reaching the people.” Gospel Workers, 363.

During our studies, Pastor Elias began to understand the tenets of our faith, including the plan of salvation, the importance of the moral law, the Sabbath, and the Spirit of Prophecy. He was impressed with the clarity of the truths he was learning. Many of his biblical questions were resolved. Soon he began to teach these truths to the students, pastors and workers of the project. Some of these are already sharing the message with their own families and friends. Pastor Elias started teaching yet another pastor who is now keeping the Sabbath and holding services on Saturdays.

We are conducting a training course for a group of project workers and other church members on how to conduct outreach in the local area. Since receiving the light of truth, Pastor Elias and a few workers have decided to renew their covenant with Jesus through baptism. The project was blessed in 2012 by having Pastor Cody Francis baptize them.

God is revealing great blessings on the work done to revive the project, but as you would expect along with revival and reformation, this is also the time of shaking. Many students left the project and disparaged the new diet. Workers who did not agree with the truths left their positions. Associate pastors asked Pastor Elias to shut down the church. Many financial supporters discontinued their resources because they said the project was associated with a sect and not a real Christian church. With all this revolution going on, Pastor Elias remains steadfast in his decisions and believes that God is in control of this work. I am very grateful to my good God for the opportunity to labor in His field and enjoy the privilege of seeing people surrender to the truth that will make them wise unto salvation.