Life in a foreign country is full of challenges—differences of language, culture and lifestyle standards, just to name a few. There are days of hopefulness and optimism, when you see the hand of God operating and then there are days when you wonder about what impact you are having. But then there are always the promises in the Word of God, especially the one that says “I am with you alway, even unto the end of the world.”

With all the ups of downs of life, this is one promise that we do well to remember. The difficulties of life seem to be growing exponentially, but we have the sure word of God that He will never leave us nor forsake us. Often, in confronting tough situations, we must strive to keep the promises of God fresh in our minds so that we are not overcome with fear or doubt. 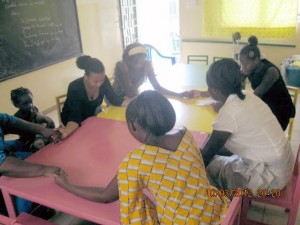 Senegal is considered a very peaceful country, though it is a Muslim country. Islam here is quite tolerant. Occasionally, there have been outbreaks of violence toward the Christian community, but these instances are rare. In fact, many Senegalese Muslims are very open to discussing religion. Since I come into contact with many young people in my classes, I have determined to always include some aspect of religion in my discussions with them. I was once warned that this could be problematic, but God has blessed and I have never had a problem. In fact, many times the students open the discussion.

For most Muslims here, Christian means Catholic, and when they find out that Adventists don’t eat pork, drink alcohol or smoke, they are quite intrigued. This opens the door so that I can share about the health message, which leads to other aspects of religion.

Recently, I was given a copy of the Great Hope, a condensed version of the Great Controversy, in English. I arrived at one of the schools early one morning and was sitting in the teacher’s room praying. The thought came to me to leave the book on the table. So I prayed that God would speak to someone’s heart to take the book, and then left it on the table. I came back to check on it at the first break and it was still there. However, when I came to look after the second break, the book was gone. I was quite happy and realized that literature in English may be a good way to get the message out as people want to speak English here.

The end-of-the-world hype around December twenty-first gave me a wonderful opportunity to discuss the truth about the end of the world with the people down here. It was clear that some people were a little apprehensive about the future and the confirmation that only God knows the time and He is ultimately in control was quite comforting to many. One Catholic young man was especially anxious. He had been following all the theories and it was having a negative effect on him. I was able to talk about God with him on several occasions.

The decision to talk about God in my classes brings me several opportunities to witness. One former student named Paul was very likeable and occasionally I would run into him. One Sabbath morning, I was going into Bethel, the English-speaking church, when I saw him. We spoke briefly and I told him that I was going to church. Since everyone wants to speak English, I emphasized that the service was in English and it would be a good way for him to practice his English. He smiled and said that he would come by sometime.

Well, to my surprise, about three weeks later, Paul was waiting for me Sabbath morning outside of the church. I was happy that I had decided to be in Dakar that day. We had Sabbath school at Bethel, but because there was a special speaker from America, the three churches met at Pointe E for the worship service. He stayed for the service and asked for a Bible. The special speaker was to return on Wednesday night for a special presentation. I was not there the following Wednesday evening, but Paul attended the meeting. He has promised to come again. I thank the Lord for the opportunity to share His good news with others.

Aside from the outreach ministry to Muslims and Catholics, the work inside the church is moving forward. We (Senegal Health Project) hosted a weekend women’s retreat. Sisters from the three Dakar churches, Pointe E, Bethel and Diamalaye met in Mbirdiam to spend time together and look into some issues confronting our churches. Workshops on “Marriage with Unbelievers”, “Women’s Submission” and “Skin Bleaching” were held. 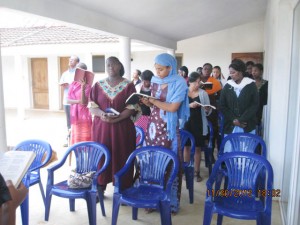 Sisters at the retreat.

Several young Adventist women have married outside of the church this year. It has caused quite a bit of controversy and the women’s ministry department, Mifem, decided to address this issue. There was a lively discussion on this subject as well as on the topic of submission. Many women bleach in Senegal and it is becoming a major health issue. A video about skin bleaching was shared to provide information to our sisters about the dangers of bleaching as well as how to help someone who is bleaching.

At the outpost, we are moving along slowly. Tragedy struck as our donkey died from a dog attack. Also Doucoure, one of the newly converted brothers, was subject to some serious persecution from his family. We had been paying for a room for him, but he decided to go back to his family home. Things were quiet for a while, but eventually the situation deteriorated and he has left the area. Please pray for him.

Because of the need for new converts to have a place to stay and the need for a meeting place, I decided to put nearly all of the financial support we have received into constructing rooms that can be used for housing or holding meetings as the need arises. This new building is partially completed. The doors and windows of the rooms are mounted and the walls are plastered. We need to finish the bathroom and eventually, we will add a small kitchen. We hope to have it finished soon as we have been asked to hold another campmeeting.

Although we planted several crops during the rainy season, we did not have a large harvest. We had a big caterpillar problem so there was no corn or watermelon. The caterpillars did a good amount of damage to the trees and flowers but thankfully no trees were destroyed. We were blessed with some beans, a few tomatoes and peppers. Bissap (hibiscus) and mangoes were plentiful, and we had some cassava. One of the biggest blessings is that we are having the first harvest of lemons from trees we planted. We are also expecting some bananas soon.

All in all, the Lord is blessing though there have been many challenges with our vehicle, a 1988 Mitsubishi Pajero. As I write, it is in the shop getting much-needed repairs to the engine. It has had an oil leak for a while but so many other parts needed attention that we were unable to get to it. When I returned from the United States, the fuel tank and pump had to be fixed. Then the starter had to be replaced and two weeks later the brakes.

Last week the oil was pouring out of the engine so we finally had to address it. Still, we have to thank the Lord that we have an honest mechanic named Mbagnick (pronounced Ban-yeek), with whom I have wonderful discussions about God, health and the last days though he is a Muslim. He always asks me to pray for him and I do.

Please continue to pray for the Senegal Health Project. There is so much work to do here both in the church and in the community. Pray for the mission school, Clair Soleil, which is a wonderful evangelistic tool. This year enrollment has increased to 59 students from about 40. We still need to add two more classes so that we can have a full primary school, but I know that God is willing.

May God continue to bless and keep you all.