As many of you know, Healing Leaves has been sponsoring Bible workers for several years. Many of the souls that we have worked with, in Dominican Republic, that have been brought to Christ, are the result of the efforts of these Bible workers. 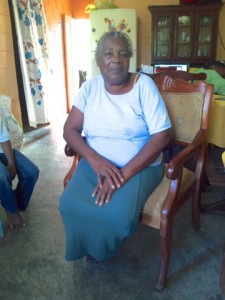 Let me share an exciting story of one of our husband-and-wife Bible-worker teams. Ten years ago a very dedicated believer named Virginia moved into a nearly godless village, Juanillo, in the eastern part of the country. She soon discovered that she was the only Seventh-day Adventist believer there and began to pray that God would send someone to fellowship with her. Each week she held her own study and church service in her little home, all by herself. She never found anyone who cared enough to consistently fellowship with her. It was a terribly lonely experience. Day after day, for ten years, she pleaded with God to send someone to fellowship with her. Many of us may have given up, but Virginia did not. She continued to relentlessly wrestle with God without ceasing. A year ago we, with no knowledge of her existence, made the decision to send Juan and Maria Colon to Juanillo. Within a few days of moving there, they began their door-to-door work to meet the people. At first, it was hard, since it seemed nobody in the whole town had any spiritual interest.

The village was so uninterested in religion that even the Catholic church there stood empty with the shutters and doors falling off of their hinges. The priest had given up and moved away, leaving the building to decay. It reminded me of a movie scene of a ghost town. As the breeze blew through the village, the shutters would flap against the building. Recently a small Pentecostal church had started up, but their services consisted mainly of shouting and singing with little spiritual experience, so few people showed enough interest to attend.

On the third day of visiting they knocked on Virginia’s door. Imagine her joy to discover that Christians who shared her own faith experience were working in her own village as an answer to her prayers! Sometimes we give up way too soon. The next Sabbath Juan, Maria and Virginia held their first services in their living room. But it wasn’t just the three of them. They had many visitors. 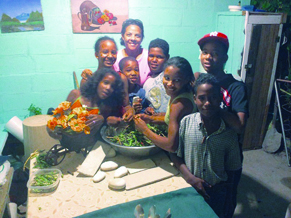 The genuine love and concern that Juan and Maria expressed when visiting the homes had attracted people. Maria is such a loving, thoughtful person that the children in the village began to cling to her. Many of their mothers work long hours in the resorts doing laundry and cleaning, and leave these children on their own all day. The kids have found in Maria a surrogate mother of sorts and they can’t get enough of the sweet Christlike spirit she possesses. When she needs to husk the guandules, she will have at least five kids helping her.

Within a few months, they found that they needed to remove the wall that separated their living room and kitchen and turn the entire area into a church as more people began attending.

Our pastor coordinator, Miguel, asked some of the children why they were attending.

They answered, “It’s because she loves us and doesn’t beat us like the other pastor’s wife.”

Since they had done such a good job of working in Juanillo, we decided that it was time to hold an evangelistic effort there; so this past December, on the sixteenth, we held an evangelistic campaign in the village square in Juanillo. It is always our practice to combine an operation where we provide free health care and health counseling to the area where the meetings are held.

In the past, we have held free clinics in the church or building where we were having the meetings. While it was effective in bringing people to our meetings, we always had many more people come than we could adequately care for and often we ended up with very stressful situations. This time, however, I decided to try out a new method. Each day I would fill a backpack with medical supplies and go door-to-door with Maria and several other members and offer free medical services to the families right in their own homes. It turned out to be a very good way to reach them. No more angry crowds! This is the way we will carry out our future operations. 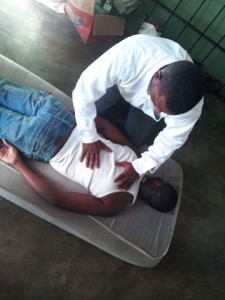 We made up a strange sort of group, perhaps, by some people’s standards. The group included Maria, Otoniel, Juana, (a lady who used to be the village prostitute, but now had been attending church for several months), had a bunch of happy curious kids and myself.

While I took care of the medical issues, Otoniel gave massages and gave nutritional counsel. I was amazed to listen to Otoniel as he talked with the people. I had no idea that he knew so many natural remedies that used the plants that grew right there in the area. Juana would read Bible verses and then we would pray and move on.

During the evening meetings we would see many of the people we had cared for during the day. Each night the meeting attendance grew until people were sitting on benches outside of the area protected by the big blue tarp taking their chances with the rain.

The messages I shared with the people were calculated to give them hope for the future, as most of them live in continual drudgery. I talked to them about a God Who loved them and had plans to take them away from the conditions they now endure—working nearly as slaves for the big tourism corporations. I told them about the mansions that God has prepared for those who accept and love Him. I told them how He controls the events of the world and is preparing to send Jesus soon. I shared how sin has separated God from us and explained through the sanctuary how God had a plan to restore mankind. They were thrilled to discover that God wants to redeem us from our sins and freely gives His grace to empower us to overcome the snares of Satan that keep us in spiritual bondage. They had never even dreamed of such a concept and were captivated by the message of God’s plan to save us from sin.

I finished on Friday evening and had to leave to go to another district to preach the next day. On Sunday, as I was preparing to leave for the airport, Maria called us to tell us that she and Juan had had more people in their church than ever before and that the people were talking excitedly about how they had never heard any messages of such hope in their entire lives. I am so grateful that we have such a special message to share with the world around us and I feel privileged to be able to have the opportunity to share it in so many places around the world.

Healing Leaves is beginning to expand our reach in not only the Dominican Republic but also in India as well as the Philippines. Otoniel is now a volunteer, but we wish to find a sponsor for his monthly financial needs. We are in the beginning stages of opening a Bible worker training school near Chennai India. It is our goal to have many Bible workers there, but we have found that we must train them first. Then once trained, we need sponsors who will support their needs on a consistent basis so that we can keep them working faithfully every month. God is opening up the way in these countries. The gospel is going like a fire there. We need financial support to sustain our workers as they minister so faithfully. Depending on the country and region, the cost of hiring and maintaining a Bible worker is between $85.00 and $225.00 US per month. That’s a fraction of what it would cost in America and they still bring many souls to the kingdom. Will you pray for our Bible worker projects? Will you consider sponsoring a Bible worker or sharing the cost with someone else? Your support means that people in many lands will be granted an opportunity to join us in Heaven. They may not look or sound like us, but they are still God’s children and He is giving us the opportunity of helping to save them.