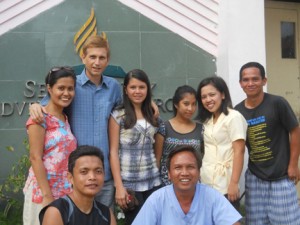 James, Daryl and Janna Kirtley with one of the literature evangelist team.

Earlier this year we received a forty-foot container of Tagalog tracts from the United States via ocean cargo. The container had 879,750 tracts in Tagalog for distribution in the Philippines. There are two main tracts in the shipment that we have translated into Tagalog. The first, Narito Siya’y Dumarating (Behold He Cometh), focuses on the fundamental teachings of Seventh-day Adventists: the Law of God, righteousness by faith, the state of the dead, the Sabbath, the Three Angels’ Messages, the 2300-day prophecy and the sanctuary. The second, Kalusugan ng mga Bansa (Health of the Nations) focuses on the health message and includes a section on the Seventh-day Sabbath, as well as repentance and confession taken from the book Steps to Christ and the Bible.

We have received many inquiries over the years from the distribution of this literature in the past, including recent emails and text messages. A third tract is Huling Babala sa Sanlibutan (Earth’s Final Warning.) This one was taken from the Great Controversy Between Christ and Satan book, which deals more with the history of the reformation and the dark ages, the developments of things transpiring around us in the political and social world, and of the prophecies of things to transpire in the near future.

On September 21, after having a prayer session that we would have the funds to pay for travel to distribute thousands of pieces of literature, our family plus five more brothers and sisters from our church loaded into the van. We prayed for the Lord to bless our trip and to guide us to those seeking the truth for these last days. Our first stop was in metro Manila (a city of fifteen million people) from where we had to ship the boxes of tracts to various cities where we would be distributing them. It took two days of making our way through heavy traffic and negotiating the fees and expenses with the various bus companies used for transporting the heavily loaded boxes.

We then proceeded to Bulacan, where I was invited to share my testimony at a district fellowship meeting. The meetings went well and I was blessed as I shared and encouraged God’s people to surrender all to Jesus. 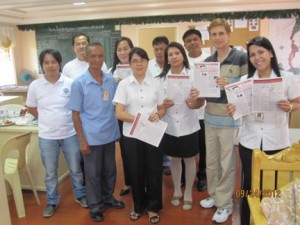 Then, we travelled far north to San Fernando City in La Union Province. We stayed there for three days and distributed literature in the markets, shopping mall areas, Jeep and bus stations, and to the thousands of Catholic students streaming out of the high schools and universities in the late afternoon. We also made sure we gave out tracts at the municipal hall, capitol building and other government offices. The district pastor, Pastor Steve, and the school staff there were very accommodating and helpful to us in our missionary outreach there.

After San Fernando city, we were impressed to head further north to Candon City where we continued our distribution. We contacted the local Adventist church and asked if we could prepare our food in the church kitchen. They opened the doors to us and we had dinner there before beginning the work of distribution in that city. That night they had midweek prayer meeting service and the elder invited me to speak. I had the privilege of sharing a message on revival—about surrender and God’s power to transform our lives.

From Candon City, we travelled south to Dagupan City for another effort of sharing these wonderful published messages. When we saw the thousands and thousands of people in the markets and business districts, many of whom had no jobs and very little money, we thanked and praised God for providing the bread of life for us to distribute to them.

After distributing our tracts, we headed west to Alaminos, where we found the Seventh-day Adventist church and school. The school teachers there were very nice and they requested that the pastor meet with us. We shared with them about our mission and they were very supportive. One family put us up in their house for five days for free. We distributed thousands of tracts in this small, but very beautiful place.

In Alaminos, we were also invited to share messages all day Sabbath in the church. In the afternoon, the Lord brought another pastor and several laymen from various remote areas to hear the health message. God impressed their hearts with the importance of the health message and medical missionary work, and they also requested our literature. We were able to give them each several boxes of tracts to carry to their remote areas for distribution. My heart went out again in gratitude to God for sending these men to receive the message we shared and to carry these Tagalog tracts to the people in darkness in their respective areas. 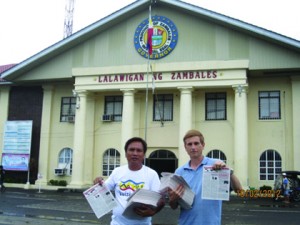 From Alaminos, we went south to the city of Iba in Zambales Province. Satan endeavored to hinder our work in this city, but God overruled the work of the adversary, and the literature went out to thousands of people there, including the vice mayor of that city. As in all cities and towns we went to, we made sure we covered all the capitol and municipal buildings with literature. We distributed literature to all mayors, vice mayors, governors and vice governors of every province, as well as all government employees.

After completing our work in Iba, we went further south to Olongapo City where our group was hosted by Dr. Sam Dizon, a very dedicated medical missionary doctor who has been promoting and doing medical missionary work in the Philippines for many years. I was so happy to have spent more time with this dear man as we have the same burden to promote our God-ordained health message.

While visiting, we met a woman with crippling diabetes (advanced neuropathy). She was encouraged by our prayers and enlightened by the health tracts. God answered her prayers that Sabbath day by sending us right to her home with the healing message of Jesus Christ. Praise God! This was a wonderful experience.

About twenty thousand tracts were distributed in Olongapo City. While there, the men in our group also went to the red-light district of Subic Bay where infidelity and drunkenness were marketed everywhere. We gave out tracts to young women being used in this trade in this wicked city. May God open their hearts. As they read and contemplate our literature, may they find our lovely Jesus and be won to His love. Oh, how Jesus loves these dear people who are in darkness! We must reach every kindred or kind of people for Christ. (See Revelation 14:6-7.)

From Olongapo City, we went south to Balanga City. When we arrived at the center of the city, hundreds and hundreds of people were just pouring out in droves from the services at the Catholic church. Most of them received our tracts that day. Our prayers must continue to ascend to heaven for these dear souls as they read and contemplate the messages contained in our literature. Ninoy Aquino, who was assassinated here years ago, once said, “The Filipino is worth dying for.” Indeed, Jesus died for these people as well as for all of the world. It is our burden to reach as many of the hundred million Filipinos as possible before probation closes.

“From city to city, from country to country, they [canvasser-evangelists] are to carry the publications containing the promise of the Saviour’s soon coming. These publications are to be translated into every language, for to all the world the gospel is to be preached. To every worker Christ promises the divine efficiency that will make his labors a success.” Testimonies, vol. 9, 34.

“The world is to receive the light of truth through an evangelizing ministry of the word in our books and periodicals.” Testimonies, vol. 9, 61.

These are just a few of the many quotations, in which the Lord is admonishing us to get His Word and His last day messages out to the people who are in darkness in the various languages that they can understand. In eighteen days we have distributed about seventy-five thousand tracts.

We have received inquiries through text messages and e-mails since the distribution. One e-mail is from a woman thanking us for the literature and expressing her gratitude for the light that these tracts have shed upon her life. We just received a text message this morning from another man inquiring about the Millennium and asking if we have more information to share. We will be sending him more literature and the book Great Controversy. We received a lot of inquiries about our vegetarian cookbook as well.

We would like to take the opportunity to thank those of you who have donated to this ministry to enable us to continue to reach the Filipino people here in this mostly Catholic country. We are continuing to reach out to this country with literature distribution, seminars for the general public and seminars specifically for Seventh-day Adventists.