Reaching the Children of Kenya

As we continue to see the events happening here in United States, we are thankful that the gospel is being shared in Kenya and around the world. Surely God is holding back the four winds to give us all a little more time to reach people that are searching for the truth. 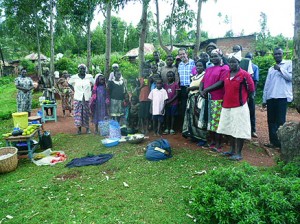 Tom and the new Bible workers.

The work has progressed dramatically this year in Kenya. The Bible workers are very active and have twelve new groups that are meeting and studying together. In November of 2011, we had a “Revelation of Hope” series of evangelistic meetings in Kenyenya, Kenya. One of the people that was baptized was a Pentecostal pastor. This man has been a tremendous worker this year. He has four groups that have accepted the Sabbath and this has resulted in many baptisms. When we visited Kenya in November of 2012, two of the people that were baptized, that this former Pentecostal pastor had studied with, were older men that were lame. The Bible workers offered them the option to join by profession of faith. Both of these men decided that they wanted to be baptized by immersion. It had rained very heavily in Kenya that week, and the water was very swift. It took a lot of effort to get the men in and out of the water safely, but God is good and they were able to be baptized. We pray that their commitment to the Lord will remain strong.

Another blessing for the work in Kenya is that Tom and Pam, a very committed couple from Tennessee, have decided to stay in Kenya for more than five months and direct the work. They had visited in November of 2011, and felt that the Lord was calling them to help in some way. They returned to Kenya the end of October, and will be there until the middle of March. This has been a great blessing. Pam has a burden for the children and is helping with the orphanage. Tom is overseeing construction projects, and helping the Bible workers. They are having a special training program once a week, to study any points that the workers may not be completely comfortable with. They have also been going house to house to study with people, and also conducting a Bible study at the orphanage once a week. Our prayer is that they will remain healthy and that God will guide them in this work. 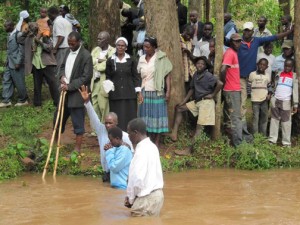 The children in the orphanage are doing well. They are growing physically and spiritually. It is very rewarding to visit, and listen to them sing praises to the Lord. They have a beautiful choir. (If anyone would like a CD of the children singing, please contact us and we would be happy to give you one. This was recorded in the orphanage cafeteria with an MP3 player, so it is not professional quality; but it turned out quite nice and we think that listening to them sing will be a blessing to everyone.) Our choir leader wrote several of the songs based on Early Writings. They do not have any accompaniment, but they sing parts and it is very beautiful.

We will just tell a brief story of one of our children at the orphanage. Edgar was left by the side of the road, when he was less than one month old. He was picked up by a lady, who raised him until he was seven years old. She died suddenly, and then he found out that she was not really his mother. Then one of his school teachers raised him for two more years. Then this teacher was killed in a roadside accident. Edgar had no place to go, and was on the streets for almost two years. One of our Bible workers, Ezekiel, met him and felt compelled that he must be helped. Ezekiel was able to get him in to Ibencho School, one of the schools that Advent Hope has built and now sponsors. His living conditions were still very poor and when the orphanage opened, Edgar came to live there. He had never been taught about the Lord until he came to Ibencho School. Now Edgar has been baptized. He wants to be a doctor one day and be able to help other people. Edgar says, “I praise my Lord that He was all the time with me…. I have a wonderful Father in heaven who is my Creator.” Edgar will be a sophomore in high school in 2013, and we are thankful that we have found someone to sponsor him for school. 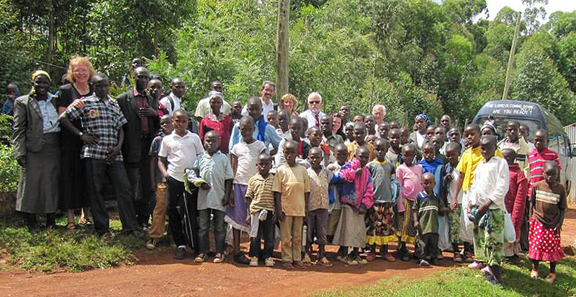 The needs of the children are so great. We are thankful that the orphanage is doing well. We have land in another area where we are currently building a school. There is also room to build a second orphanage if the funds become available. Please pray about this matter, if you are interested in helping the children. We have over two hundred orphans that are currently on the list to be accepted into the orphanage, but we do not have the funds or the capacity for this in the current orphanage.

“In the closing scenes of this earth’s history many of these children and youth will astonish people by their witness to the truth, which will be borne in simplicity, yet with spirit and power. They have been taught the fear of the Lord, and their hearts have been softened by a careful and prayerful study of the Bible. In the near future many children will be endued with the Spirit of God and will do a work in proclaiming the truth to the world that at that time cannot well be done by the older members of the church.” Adventist Home, 489.

It is our prayer that these children will allow the Spirit of God to work in their lives, and that God will use them in these final days.

A second clinic is being completed in Ekerongo and is to open soon. The plan is to build a third clinic in March/April of 2013. This clinic in Ekerongo is approximately ten miles from the nearest hospital. This is not much of a distance in Western countries, but in Kenya, where the primary means of transportation is walking, ten miles can be a long distance. The clinic is close to the church that was built in Ekerongo, so we pray that it will be a means of helping people to become interested in hearing about the gospel. There is also enough land to build a school there, and our plan is to build this school in 2013. They had a school at one time on this property with more than eighty children. The school was made of sticks and mud, and the government closed it down a little over a year ago. We are anxious to have the school reopened. “The Lord calls upon our young people to enter our schools and quickly fit themselves for service. In various places, outside of cities, schools are to be established where our youth can receive an education that will prepare them to go forth to do evangelical work and medical missionary work.” Counsels on Health, 395.

While we visited Kenya in November 2012, we had a nurse and her father accompany us. The nurse taught basic CPR to the children in the orphanage. They were so excited to learn. She also had a class for the women in the community with some information on pregnancy, raising children, and she taught them what to do if their children were choking, along with some basic CPR. The clinics are a tremendous means of outreach for the communities.

“We are stewards, entrusted by our absent Lord with the care of His household and His interests, which He came to this world to serve. He has returned to heaven, leaving us in charge, and He expects us to watch and wait and prepare for His coming. Let us be faithful to our trust, lest coming suddenly He find us sleeping.” That I May Know Him, 351.

May God guide each one of you in 2013, as we wait, watch and prepare for His coming.