When They Stole Only One Dollar 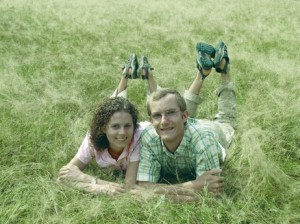 When Jonathan and I were in Kinshasa (the capital of the Democratic Republic of Congo,) we decided that we needed to buy some phone credit and exchange some money. We thought it would be a good idea to do this before flying out the next day to Kisangani (a large city to the north of Kinshasa) because Kinshasa is larger; thus more things are available.

Earlier that same day, when we went to the market to get some food to eat, we had not had any trouble. I knew Kinshasa was dangerous, but I was excited about leaving the guesthouse again anyway. Kinshasa was an interesting city, but I am glad that I do not have to live there! It is extremely loud and dirty.

Jonathan and I walked down the main street to the right this time. After a while, we saw a cell phone business across the street that looked promising, so we stopped there and were able to get the SIM cards and credit we needed. This man was also able to exchange $50 for us, which was nice. Jonathan separated this stack of money into three piles and put them in different pockets. This is safer than putting all of it in one pocket. Some of the money he put in his shirt pocket.

When we left, we thought about going back to put the money away safely, but that was a long way back just to get rid of the money, so we decided to continue walking. We thought it would be fun to walk more. I really thought it would be nice to go to the Congo River, but as we walked, it seemed like every road that went toward the river was like a back street. Jonathan told me he did not think it would be safe to take a street that not many people were occupying, and I agreed with him. We just kept walking for a long way. There were so many interesting things to see.

After quite awhile, we decided that we should probably head back soon. We wanted to be sure to get back before the sun started to set. As we went just a little further, we passed some men who were smoking who noticed us right away. We walked by quickly, but I could see the men’s shadows catching up to us from behind in a run. I thought, “Oh, no! What’s going to happen now?” The next thing I knew, one man was holding Jonathan’s arms from behind. He had a long cigarette sticking out of his mouth close to Jonathan’s head. I did not like that! The second man quickly came in front of Jonathan and grabbed something out of Jonathan’s shirt pocket. Something from his pocket fell to the ground. They snatched it up and speedily left. Jonathan said, “Let’s just keep walking.” We kept walking like nothing had happened. We talked about what they might have taken, but Jonathan did not check his pockets right then, and I thought that was wise.

After we got far enough away from the robbers, we crossed the street and began waiting for a bus. We did not want to walk past those men again.

We knew now that it was foolish for us to be out there and were very eager to get back to the guesthouse as quickly as possible. One bus came and passed by. Another bus came and left. They streamed by, but they were all jammed full of passengers and did not stop. It would not be safe to stand there waiting for too much longer.

As we waited, we noticed a well-dressed man a little way away from us that was also waiting for a ride. After awhile, a nice car pulled up, and the man got in. Jonathan and I started walking toward the car. Maybe they would give us a ride? They stayed there, so Jonathan asked if we could have a ride. They invited us in, and seemed like nice men. 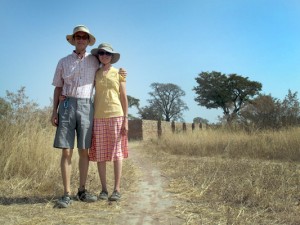 Jonathan told them where we needed to go. When we finally got back to our guest house, Jonathan offered the driver some money, but he refused it politely and said we did not need to pay. The ride was for free! He gave his phone number to us. As this was going on, I started thinking about the verse that says, “Some have entertained angels unaware.” Only this time it seemed that an angel was entertaining us. This was such a kind clean-cut man.

Could he be an angel? He certainly was a blessing for us either way. Even if he was not an angel, I think God sent him our way when we needed him.

When we were inside, we got out a paper and pen and started counting and writing down everything that had been spent on our trip. We counted the money two or three times, but to our amazement only 900 francs, which equals about one U.S. dollar, was missing! That robber had somehow reached into Jonathan’s pocket and instead of doing the easy thing—grabbed everything—he only got a few francs! Jonathan and I were really amazed and praised the Lord. That was a miracle—and not only that—but the ride was an amazing providence, as well. (Our driver could have even been an angel!) We prayed and thanked the Lord right then and there for His protection and blessing.

I am so thankful for all the times the Lord has intervened in my life. I am sure there are many times that God has protected me or done miracles of which I am not even aware. He has done this for you, too! Even if you cannot think of examples, He is there protecting you. I am looking forward to talking to Jesus and my guardian angel some day and hearing all the stories they will tell me. I am sure they are really looking forward to this too. God is so good!

“A guardian angel is appointed to every follower of Christ. These heavenly watchers shield the righteous from the power of the wicked one. This Satan himself recognized when he said, ‘Doth Job fear God for nought? Hast not Thou made a hedge about him, and about his house, and about all that he hath on every side?’ The agency by which God protects His people is presented in the words of the psalmist, ‘The angel of the Lord encampeth round about them that fear Him, and delivereth them.’