Butterfly in the Buttermilk 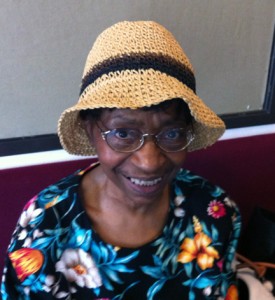 About a year ago, my daughters and I stopped by a local hospital and we saw a familiar form in the waiting room. It was Freddie Mae Hunt. She had been having health problems and we hadn’t seen her in church for a while, so it was a special surprise for all of us. Freddie Mae told us she was doing better. The doctor said she wouldn’t be needing her oxygen tank for long and would be able to get back to church soon. Freddie Mae threw back her head and laughed in joy. And then she said, with a little smile, “You know I’m the only fly in the buttermilk there, but it feels like home to me!”

“What?” I exclaimed, “You can’t be compared to a fly! You, Freddie Mae, are the butterfly in the buttermilk!” She laughed delightedly and said, “I ain’t seen no black butterfly, honey.” And I replied that there are black butterflies and I would prove it.

Freddie Mae was born in New Orleans, Louisiana, the youngest girl of five children. Her father died of sickle cell anemia when she was only four years old, and her baby brother also died of the same disease. She doesn’t remember very much of her childhood, but recalls being unruly and wanting to have her own way. One time, she stayed home and painted her fingernails instead of going to school. As usual, she was disciplined by one of her older sisters who would lash her with a braided switch of three weeping willow branches.

Their mother was a practical nurse who did “day’s work.” This was private duty work that took her out of town frequently. Because she wasn’t able to be at home very much, Freddie Mae’s mother asked a friend to take care of her little girl. Mary Jane Lanz took six-year-old Freddie Mae into her home, where she would stay for the next four or five years.

“Mary Jane Lanz was my angel, my savior,” explains Freddie Mae. Mrs. Lanz didn’t have any of her own children, but served as a foster mother. She taught her many good things. Freddie Mae says that Mrs. Lanz “was the one who got my Lord Jesus Christ. She planted a seed with me and I am planting it in my children, and I’m still planting seeds today. It’s all about the Master.” 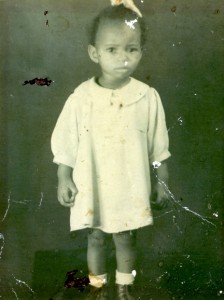 Freddie May at 2 years old.

Mrs. Lanz was a Seventh-day Adventist, and when Freddie Mae was in her home she went to church with her every Sabbath. “I can remember going to church on Sabbath.” She recalls being in Sabbath School at the Berean Seventh-day Adventist church in Baton Rouge, Louisianna. “As a child, I liked the stories they gave the children at church.”

After this, she was placed in the Blunden Home, a Methodist orphanage and boarding school for girls and boys from the court system in Baton Rouge. She attended McKinley High School where she was a majorette in the band for four years. She stayed in Blunden Home until she was 18 years old and then went to live with her aunt and uncle, back in New Orleans.

In 1963 she set her sights on Oakland, California where her brother Robert lived. She wanted to go to college, so she packed up and moved out West. She took nursing at the local college for a year and a half while working at a nearby rehabilitation center in San Francisco.

About this time, she decided to visit her mother in Connecticut. While she was there her mother said, “Once you drink Connecticut water, you don’t want to live anywhere else.” But Freddie Mae replied, “But Mama, I gotta go back to school.” She says, “But Mama was right,” and she stayed in Connecticut.

Eventually, Freddie Mae got married and had three sons, James, Jerome, and Albert. When the boys were in their teens, Jerome began hanging out with the wrong crowd and started getting into drugs. One day, Freddie Mae left to work the evening shift at the ball bearing factory, leaving the boys at home to do their homework. She came home to an uproar. Jerome had been shot! He had “gotten into some devilment” and was behind someone’s workshop or garage when spied by the police. “They told him not to move and he moved, so they shot.” He was paralyzed from the waist down.

He was rushed to the hospital and it didn’t look good. The doctors called her and said they had made the decision “to pull the plug.” Freddie Mae went to the hospital, bringing with her the suit they would bury him in. When she came into his room, Jerome opened his eyes and said, “You look like my mama.” Freddie Mae replied, “I am son, but from this day forward I give you up to the Lord.” From that moment he began to heal, and spent the remainder of his time in the rehabilitation unit.

After discharge he went back and forth with drugs again. Freddie Mae told him that she wanted him to know that whatever the Lord decided to do, it was all right with her. She had felt like an enabler, but now she was giving him into the Lord’s hands again. 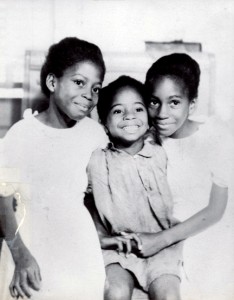 Freddie May today in the center with her sisters at 5 or 6 years old.

In upstate New York there was a man who was helping young men who were using drugs. This man introduced them to the Lord and provided them with structure. Jerome lived there for nearly three years. He dove deep into the Bible and he began to understand that “the Lord had brought him a mighty long way and he didn’t get there by himself.” The doctors had told them he would never walk again – but he did. Today he only walks with a limp. Freddie Mae says, “God did strike him in the top of his head because he is now an ordained minister!”

Her son James was 16 years old when Jerome was shot, and eventually he too got into trouble and became very depressed and eventually took his own life. Freddie Mae just fell apart.

“I had to give the situation to someone greater than me. The hurt will never go away. What is done is done – you have to let go and let God.”

After the boys were grown and her mother passed away, Freddie Mae traveled to Portland, Oregon. Her niece was living there alone with her sick baby. Freddie Mae ended up staying. In 2000 she had a stroke and as a result cannot recall 10 years of her life, and her memory is very poor. But she says, “You do the best you can with what you got and deal with it. “

As she was finally able to settle into her new life in Portland, she began attending churches around the area, but none felt like home. One day, she saw a flyer advertising a prophecy seminar for the Historic Message Church, an independent Seventh-day Adventist church in Portland. She told several friends, but no one seemed interested. So she told herself, “I’m going, if I have to go by myself.” She attended every meeting, and at the very end of the seminar “a light bulb went off in my head – this is the Seventh-day Adventist church!” She linked the new knowledge she had gained at the meetings with the experience she had as a child. She had found her home! 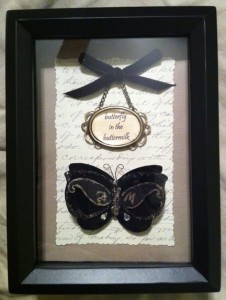 Freddie Mae shares some words of wisdom, on what has kept her going throughout all those difficult years: “The only thing that sustained me was my faith. Otherwise I would be crazy as a vegetable and chasing rabbits. If you give it to the Lord, you have to leave it to the Lord and keep your fingers out of the pot. He don’t need no help. You know you will mess it all up!”

To this day, the Historic Message Church is very blessed with having Freddie Mae as part of the family. And, in case you are wondering, she now has a beautiful black butterfly displayed in a frame above her bed.