Paul speaks about having an open door to go and preach the gospel in other places. “Continue earnestly in prayer, being vigilant in it with thanksgiving; meanwhile praying also for us, that God would open to us a door for the word, to speak the mystery of Christ….” Colossians 4:2, 3. This is a story about a unique opportunity that was given to a Bible worker named Timothy.

As we near the end of this earth’s history, there should be seen among us a more intense desire to see souls saved in the kingdom of heaven. We are told that thousands are going to a Christ-less grave, never having heard the true gospel presented to them or seen by those professing to believe the truth.

“Those only who are constantly receiving fresh supplies of grace, will have power proportionate to their daily need and their ability to use that power. Instead of looking forward to some future time when, through a special endowment of spiritual power, they will receive a miraculous fitting up for soul winning, they are yielding themselves daily to God, that He may make them vessels meet for His use. Daily they are improving the opportunities for service that lie within their reach. Daily they are witnessing for the Master wherever they may be, whether in some humble sphere of labor in the home, or in a public field of usefulness.” Acts of the Apostles, 55.

Just recently, I made my fifth trip to Togo, where I was assessing the progress of the work and the workers. I had a small hindrance by hurricane Sandy, and was delayed in my arrival into Togo, but made it eventually and was blessed to see my brothers and fellow workers at the airport.

“From all countries the Macedonian cry is sounding: ‘Come over and help us.’ God has opened fields before us, and if human agencies would but co-operate with divine agencies, many, many souls would be won to the truth. But the Lord’s professed people have been sleeping over their allotted work, and in many places it remains comparatively untouched. God has sent message after message to arouse our people to do something, and to do it now. But to the call, ‘Whom shall I send?’ there have been few to respond, ‘Here am I; send me.’ Isaiah 6:8.” Testimonies, vol. 9, 46. 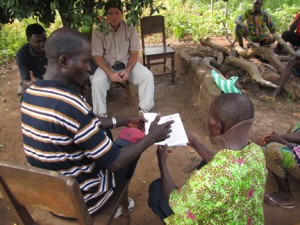 People from all over the country of Togo are crying out for the gospel to be preached to them in their village. From our last trip in 2010, we have started four new churches and many more churches could be started if we had the workers.

Timothy, one of our Bible workers, has started a church in the small city of Sotouboua. Timothy has been working hard to help this new church flourish. This church started with one family and has grown to over forty in a few months. Being a Bible worker in a Muslim and Catholic controlled community is not easy; there are many obstacles to overcome, but the Lord has truly blessed Timothy in his work in this city.

Timothy was out giving Bible studies in the community, when he decided to stop by the hospital to visit some of the sick. While visiting, he came across a man who had been in a motorcycle accident and was hospitalized. While talking to this man, he started to share the gospel with him and the man became very interested in what he had to say. By the end of the conversation, the man wanted him to return and share more about the Bible. Timothy returned and shared more about the gospel and then it led into a study about the Sabbath being God’s day to honor and worship Him. The message about the Sabbath was very new and somewhat confusing to him, since he had worshiped and believed in Sunday all his life. Again the man asked Timothy to return to study more about the Sabbath. The man became convinced that Sabbath was on Saturday and not Sunday and was so persuaded that he started keeping the next Saturday as the Sabbath. 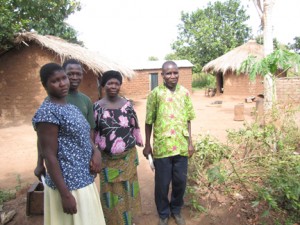 Timothy brought this family into the faith. The family lives in a remote village.

After being released from the hospital he took the message about the Sabbath back to his family and as a result his whole family converted to the message. His whole family is now receiving studies from our Bible worker. They are so excited about the message of Revelation 14:6-12, that they decided they wanted to conduct personal Bible studies in their home themselves. This man lives in a village about twenty hours walk from Sotouboua, so the Bible worker cannot make it there very often, but they didn’t want to wait for Timothy to come, when he could, to conduct the Bible studies, they wanted to tell their village about the Sabbath right then.

“Every true disciple is born into the kingdom of God as a missionary. He who drinks of the living water becomes a fountain of life. The receiver becomes a giver. The grace of Christ in the soul is like a spring in the desert, welling up to refresh all, and making those who are ready to perish eager to drink of the water of life.” Desire of Ages, 195.

This family had been keeping the Sabbath, in their home a few weeks prior to my arrival in Togo. They not only embraced God’s true day of worship, but health and dress reform as well. I wanted to see for myself where this family lived and what their home and village were like. I was able to secure transportation to this village. The village was out in the bush quite a ways from the main road that runs north and south in the country. The car that we secured had to travel along a footpath for the last part of the journey before we arrived at the village. 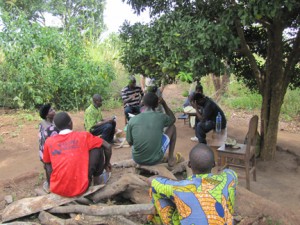 A Bible study group that Timothy studies with. The group is from the same village as the family pictured above.

When I arrived, I immediately could see that this was a very poor but interesting village. Nearly everyone in the village has a plot of land he or she is farming, so there were small farms dotting the landscape everywhere you looked. It was harvest time for many of the crops, so people were out picking their beans, cutting the heads off the millet or shelling their soybeans by hand.

The first thing this family wanted to do when we arrived was to have a Bible study. We gave this family two Bibles and a few Bible study guides to help them in their home Bible study with the community. The Bible worker, Timothy, led out in a Bible study in French and we studied more about the Sabbath and other doctrines of the Seventh-day Adventist church. After the Bible study, the family wanted to head out into the village to invite all their neighbors. This is a very small village and controlled primarily by the Catholic Church, which does not encourage any sort of study. Off we started, heading down one path and then another to the various huts in the village. Some were very receptive and others not so much.

As we were leaving the village we began thinking about how we can help Timothy take the message to this little bush village in the central part of Togo. I am hoping this will be the next village where we can conduct an evangelistic series and build a church so people can come and worship the Lord on the Sabbath and learn of his ways from the Living Word of God.

Please pray for Timothy and his work in Sotouboua.