“For I know the thoughts that I think toward you, said the Lord, Thoughts of peace, and not of evil, to give you an expected end.” Jeremiah 29:11.

Receive our greetings from Panama. The Lord has blessed us these past few months with new insight in the way He wants us to work in giving the message of salvation here in our area. As God has told us in the writing of the Spirit of Prophecy, the medical missionary work will open doors where before we could not enter. We have seen this clearly in the experience we have had in dealing with some people from the Jehovah’s Witness church. Some members of that church asked for help with their health problems. 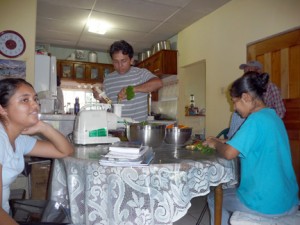 Learning and practicing how to make vegetable juices.

One example is the experience that we had with one of our neighbors. Since we moved to this town and became acquainted with our neighbors, we had one neighbor that we had not had the opportunity to witness to. She does not belong to any religion. Her husband does not go to church either, and on the weekends we had always seen them going to rodeos and other worldly entertainments. It was a mystery to us how this lady who had an Adventist childhood now seemed so aloof to anything religious. We prayed for a way to witness to her. Earlier when we had first arrived, she brought her youngest daughter to be treated for headaches due to toxoplasmosis. The Lord blessed our effort and her daughter recuperated, but we still could not talk to her about religion. We knew that her mother who had attended the Adventist church at an earlier time was now a Jehovah’s Witness.

About two months ago we received a call from this neighbor. She told me that her mother was sick, and asked if we could help her. Upon our arrival, we saw that her mother was in pain. She told us that all her joints ached; especially her elbows hurt a lot. She also had a high fever. The daughter had given her medication for the fever before we arrived. By the time we arrived, she only had pain. She had been diagnosed with a urinary tract infection and needed an antibiotic injection. She had been the person who used to give the injections in town and now she needed help. After helping her with the injection we gave her a warm fomentation treatment to her elbows, and she stated that she felt better. It was good to be able to minister to this lady. She, a Jehovah’s Witness, allowed us minister to her. Before each treatment, she allowed us to pray in the name of Jesus and never complained. One evening the fever returned and the pain increased. The daughter opted to take her to the hospital. At the hospital, she had a heart attack and died.

As a result of this loss, our neighbor realized her need of God and has requested Bible studies. At first she wanted a book that would help her in her personal study of the Bible. When we offered her Bible studies she readily accepted. It has been very rewarding to study the Bible with this lady. She had many erroneous ideas of God and the gospel of salvation, and it is very encouraging to us to hear her state that she now understands the Bible better. 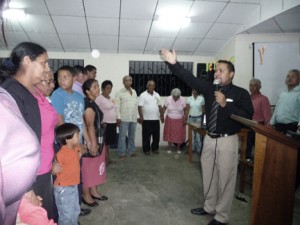 Emanuel, the young Bible worker, making a call for commitment to God.

We have seen God also working in our neighbor’s oldest daughter, who also is Jehovah’s Witness. She has scoliosis, and asked us if we could help her with this problem. She told us that when her mother took her to the doctor as a young girl and she was diagnosed with scoliosis, the doctor sent her home with some calcium tablets and never prescribed any treatments. She suffered from severe back pain. She told us that every week she had to buy a box of pain medication that she would use during the week to control her back pain. After the first two treatments, she announced to us that she no longer needed the pain medication. She is very happy that the therapy she is receiving is helping her. We are praying that one day we may also be able to share the gospel with her. When we study the Bible with her mother she now goes outside.

Another encouraging experience that we’ve had recently was to see how God has blessed one small church in our area. We had been praying and financially supporting an effort in this small church that at one time had a large membership, but in the last four years had decreased to only a family of three. God sent us a young Bible worker that has been used by Him to encourage many of the people that had stopped going to the church. After two months of the Bible worker being in the area, there are about fifteen people that meet regularly at church and they have had had three baptisms. Now the Bible worker will go to another small church where the attendance is only seven members in an effort to encourage the backsliders and bring new members to the feet of Jesus. After two months work in that church, the Bible worker will come to our church and we are planning an evangelistic campaign for the month of January. Please help us pray for these projects. We have a lot of challenges ahead, but we serve a great God who will overrule any difficulty as we, in faith, move forward. 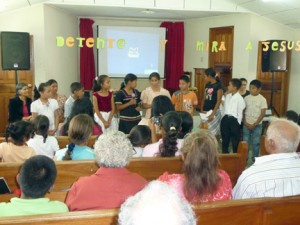 This congregation only had three members that faithfully kept the church open. Now more than fifteen members worship together.

As the text tells us “For I know the thoughts that I think toward you, said the Lord, Thoughts of peace….” God wants us to have peace and that promise means a lot to us. When we do God’s work, Satan tries by all means to discourage and distract from the work that God wants us to be doing. We know that until we are in heaven, we will always have a lot of conflict and challenges. This country also is going through a lot of changes as most countries of the world are also going through changes. The government is enacting many new laws. And there is a lot of opposition to the new changes that are in the making. Let us work while there is peace.

We are very thankful that we have the support of our local district pastor. This is one thing we did not have when we arrived here four years ago. We observed that he likes to study the Spirit of Prophecy books. He is also very supportive of the medical missionary work. He has asked us to talk about God’s healing ways at the central church of his district where the topic of health reform is meeting with some resistance.

Thank you for your prayers and support. We have the evangelistic effort program planned for the end of the year and also we have been invited to go to Cuba with the ministry Changing People’s Lives. This missionary trip was planned for October. It was postponed to December. In a way this delay has helped us, since it gives us more time to fundraise for the outreach in that country. The Lord knows what is best and He will give us “an expected end.”

By Zaida Acosta, Living Springs of Health and Education, Email: 4asaved2serve@gmail.com. Support for the work of the Acosta family can be earmarked “Panama” and sent to Mission Projects International, PO Box 59656, Renton, WA 98058.