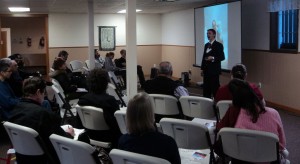 Henry sharing the message during the evangelistic meeting in Washington

It has been interesting to notice the interest and coverage given to the historic resignation of Pope Benedict XVI and the election of the first pope born in Latin America and the first Jesuit pope. With all of the public awareness, it has made me go back and review the role of Catholicism in the final days. We know that the “deadly wound” will be healed and all the world will “wonder after the beast” (Rev. 13:3), but do we have more specifics? We know that a major way in which Rome will be honored and the world wonder after her is through following her example in the restriction of the liberty of conscience. Our country will give “countenance and support to Romanism in limiting religious liberty.” “Let the principle once be established in the United States that the church may employ or control the power of the state; that religious observances may be enforced by secular laws; in short, that the authority of church and state is to dominate the conscience, and the triumph of Rome in this country is assured.” Testimonies to Ministers, 206; Great Controversy, 581. If this principle of curbing religious liberty is established, Rome’s triumph is assured! Another area that we are warned regarding is the similarity and unity that Protestantism and Catholicism will develop. “See the increasing number of her churches and chapels in Protestant countries. Look at the popularity of her colleges and seminaries in America, so widely patronized by Protestants. Look at the growth of ritualism in England and the frequent defections to the ranks of the Catholics. These things should awaken the anxiety of all who prize the pure principles of the gospel.” Great Controversy, 565. As we compare these statements with the events of today, we can know that Rome’s triumph is nearly assured and our anxiety should be awakened! There were 132 official delegations to Pope Francis’ inauguration, and for the first time the spiritual leader of the Eastern Orthodox Church, the patriarch of Constantinople, and the chief rabbi of Rome were in attendance. The world is marveling! While we do not know nor do we need to know exactly what will happen with the new pope, we must recognize the prophetic trend and know where it is heading! “The persecutions of Protestants by Romanism, by which the religion of Jesus Christ was almost annihilated, will be more than rivaled, when Protestantism and popery are combined.” Selected Messages, vol. 3, 387. May the Lord help us to be wide awake, with our lamps trimmed and burning, giving the warning message to the world! 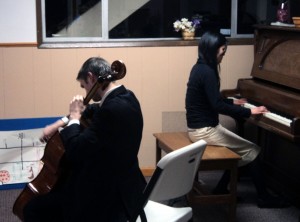 Henry playing the cello during an appeal song

We have just finished another evangelistic series in which, by God’s grace, we are striving to give the warning message of the three angels’ message to the world. This time the series was given Henry Higgins, our Bible worker intern. It was exciting to listen as he enthusiastically shared the precious truths for these last days with the people. It was a blessing to be able to interact and share the message with those whom the Lord brought out. There were several young people who attended, excitedly studying the truths from God’s Word as they were presented. We visited with one man this week who shared that he had not studied the Bible much before and especially not Revelation, and this was just what he needed. It was a bit of a challenge for him as he is originally from Italy, thus a faithful Catholic. As he came each evening, he was clearly thinking and struggling with what he has heard. As we visited together, he shared that the big problem that he saw with his church was that they had changed the Sabbath without any Biblical evidence. While he is still thinking and praying about what he has learned, he stated that the truth is the truth and that is what he wants to follow. Praise the Lord for a faithful searcher for truth. Another young man was convicted especially when baptism was covered and is now beginning baptismal studies. There are many more who are thinking, struggling, praying and making decisions. In every series of meetings, the timeless message is the same, but the Lord always brings new people looking for truth. Please pray that the Lord will continue to work in the hearts of these precious people that they may take a stand for the truth for this time!

Yours in giving this message to the world,