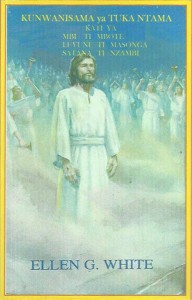 Nakatala was born to a modest Catholic family in the Democratic Republic of Congo. Because of what he was taught by his family, school and church, he believed that his salvation was sure. When telling us about his childhood, he said, “I appreciated the education that I received from my parents and thought everything was good enough that my spirituality was prepared and I would be saved when Jesus comes.”

Nakatala was very dedicated to his religion. He attended and participated in many religious ceremonies. Each year, he, along with his parents, would faithfully take gifts for all the children at the Christmas program. This was to remind them all of Baby Jesus. When the gifts were being distributed, Nakatala would picture that the old man handing out the gifts represented the Heavenly Father sending His Babe to earth to die on a cross. Then questions that had often plagued him would haunt him again.

He says that he had some fundamental questions to which he could never seem to get satisfactory answers. He would frequently pester his parents and teachers with these questions, but the answers didn’t make sense to him. He would ask: What was sin? How could sinners be saved? Did it take any effort to be saved? Why did God permit His only Son to die? Who were the sinners? How come the sinners that were to be saved went and killed the Savior?

Nakatala’s parents tried to give him simple answers to his questions. They told him that what he needed to do to be saved was just attend mass each Sunday. His teachers told him that because Jesus spread His blood on the Cross, the rest was taken care of. Nobody told him that sin was simply breaking God’s Commandments. Poor Nakatala couldn’t understand these answers nor could he understand how people could be saved without any effort; but he accepted it, because he knew that he had to accept what the Church taught regardless of whether or not he understood it.

Nakatala also showed his devotion to his church by spending much time fighting and causing problems for the churches that had teachings contrary to that of the Catholic Church. He believed that to not fight these heretics would cost his salvation. He would argue vehemently with anybody who presented to him the simple gospel. He considered those who tried to share this good news with him to be enemies of the worst kind.

The priest from Nakatala’s church was thrilled to see Nakatala’s hatred for the heretics. He would encourage Nakatala in his revenge.

The priest even confided in him once—in advance—about the death of a Mennonite minister. The priest told him that the Mennonite was holding a seminar teaching that people didn’t need to ask Mary to pray for them, and that they shouldn’t bow when they passed in front of her image, because that was breaking the Second Commandment. Sure enough, the Mennonite died two months after his seminar. Nakatala was sure that it was the judgment of God that had caused the death of the missionary, because of his false teachings.

Nakatala wondered if he should begin praying for the death of all Protestants, but he concluded that that wasn’t the best idea, since Protestants make up thirty percent of the country. Nonetheless, he was confident that he would always remain a staunch Catholic, as that was the only way to salvation.

Then one day the world got turned upside down for Nakatala—the Seventh-day Adventists moved into his province. This caused all kinds of trouble with all of the churches. These Adventists started teaching that everybody should observe the Sabbath on the seventh day of the week. When the villagers heard this, they became extremely curious and asked the Adventists to please explain. The Adventists took the opportunity to show everybody straight from the Bible that the Bible-Sabbath is the seventh day of the week. The other churches and missions in the area became angry as hornets at this teaching, but it didn’t stop the people from switching to keeping the seventh-day Sabbath. Scores of people were becoming Sabbath-keepers.

Nakatala didn’t know what to think of all of the commotion. He was sure that the seventh-day Sabbath was false since that’s not what his church taught. He decided that Adventists were not just enemies, but demons who had changed God’s law. He even concluded that the Seventh-day Adventist Church was the beast in Daniel 7:25 that changes times and laws.

For ten years, Nakatala fought Adventists with all his might. He prayed that they would meet their death like the Mennonite missionary did. He was convinced that they were attacking his conscience and trying to cause him to be sent to hell fire. He planned and plotted ways to bring their demise—to destroy their church, to bring their death, to find them guilty of breaking laws, anything he could think of—but nothing worked.

Then one day, Nakatala providentially came into possession of the Great Controversy. He hadn’t yet heard of Ellen White, so he didn’t realize that he was opening heretic material. He had no idea that the Seventh-day Adventist message had just entered his hut in the form of a book. He started reading and shortly became so interested that he couldn’t tear himself away from the book. He recognized the description of the state of the Catholic Church as he read—lack of love, lack of religious fervor, infidelity of the priesthood, the desire to destroy individuals and countries. He couldn’t help but have a changed heart as he continued to read. When he finally came to a chapter that talked about the Seventh-day Adventists, and he realized where this book came from, his heart was dramatically softened toward the Adventists. He continued to read the entire book; until he chose to unite himself with the Adventist church and follow the teachings that they taught straight from the Bible.

He now realizes that it was his church, the Catholic Church, that actually changed God’s law; that they are the ones who have changed times and laws and therefore are the beast of Daniel 7:25. He now keeps the seventh-day Sabbath. He has accepted that the Papacy is indeed wrong when it commands people to bow down to Mary’s image and that that is most definitely breaking the Second Commandment. He knows now that he can pray directly to the God in Heaven, and he will be heard. Nakatala now has the answers to his questions from so long ago—What is sin? What is salvation? Is salvation effortless? He has dedicated his entire life to the service of his Savior and plans to teach the gospel of salvation to everyone to whom he can.

Nakatala was baptized on January 11, 2013 as a public testimony to all that he has found the truth. He sends this message to his brothers and sisters around the world, “Please pray for me, because I, of course, will receive attack after attack, as I now know they did to the Mennonite minister.”

Nakatala has now committed his life to going door to door to pass out the Great Controversy and teach people that Sunday is the false day of worship. He has been able to cover the entire Kikongo region with these books. He believes that the book that answered his questions will answer the questions of many others.

By Célestin Kasongo, Democratic Republic of Congo. You may support the Bible Workers who worked with Nakatala by earmarking your donation “Congo – Bible Workers” or you may help to print more Great Controversy books and other literature for Congo by earmarking your donation “Congo – Literature” and sending it to Mission Projects International, PO Box 59656, Renton, WA, 98058.