Deweneti is a Wolof greeting that means “May God give us life to see the next Ramadan!” It is exchanged at Korite, the final day of the Ramadan fast. Ramadan was celebrated from August 20 to September 20 in the country of Senegal. Ramadan is the ninth month of the Islamic lunar calendar. Each month begins with the sighting of the new moon. Because the lunar calendar is shorter than the solar calendar, Islamic holidays move each year.

At the end of this 30-day period, people celebrate Korite. This day is the time when people seek forgiveness from the community (family members, friends and colleagues) for negative things they have done, whether it was on purpose or not. It is usually celebrated with the entire family and special friends. Everyone wears his or her most beautiful clothes and jewelry.

The Ramadan fast is a special time in Senegal. Things go very slowly. During Ramadan, Muslims do not eat or drink anything, including water, while the sun shines. Families get up early and eat a meal before the sun rises. The fast is then broken with dates and tea or coffee at sunset, and then dinner is eaten.

Life gets very tense at this time because people are edgy and tired, especially from lack of water. It is best to get things accomplished early in the day. By four o’clock, people are leaving the offices to get home in time to break the fast at sunset.

During Ramadan, Muslims are obligated to share their blessings by feeding the poor and making contributions to mosques. Ramadan is an important period for Muslims, but there is a collective sigh of relief at the end, because it can be stressful on families as the inevitable commercialization takes hold. Many families spend more money on food during this period than normal because the evening meal has developed into an evening feast, not to mention the beautiful clothes that must be provided. With the economic crisis affecting more and more families, keeping up with the demands of Ramadan can be a financial strain on many people.

The pressure is not off when Ramadan is over, because Tabaski will come in about a month and a half. On Tabaski, Muslims slaughter sheep in ritual sacrifice in commemoration of Abraham’s willingness to sacrifice his son, Ishmael, according to the Koran. It coincides with the end of the annual Hajj (pilgrimage) to Mecca. Each head of household has to purchase a sheep to make the sacrifice.

In the weeks leading up to the holiday, Dakar becomes one big sheep market. It is one big barbecue as people prepare and eat the sacrifice. Meat is shared with neighbors and the poor.

Just as the commercialization of Christian holidays has obscured their meaning, the same is happening here. Please pray that we find ways to share the true story of Abraham’s sacrifice and its signification for us all—Jesus. “For God so loved the world, that He gave His only begotten Son that, whosoever believeth in Him should not perish, but have everlasting life.” John 3:16.

Still Senegal society is a mixture of ethnic groups and cultures, and there are some people who live in the country that for some reason or other are not immersed in the dominant culture. That is the situation with my friend Migna. She is the product of a mixed marriage, a Senegalese father and a French mother. Due to the differences in the religions of her parents, her upbringing was non-religious. Like many parents in this situation, her parents decided to allow the children to choose the religion they wanted when they grew up. This can be very dangerous. Some may make a choice, but for the most part, these children, brought up without religion, remain so all of their lives.

I first met Migna, a divorced mother of two boys, when she called me to tutor one of her sons in English. (She later also became one of my students.) Her son wanted to go to an English-speaking university and needed to take the TOEFL and GED exams. Over time, we became friendly, and I learned about her family background. She confided in me about some of the issues that she was having raising her sons alone, as well as the difficulties divorced women face in Senegalese society. Divorce is common, but women are expected to remarry because remaining single is frowned upon. Since polygamy is the prevailing marital situation, women are expected and encouraged to become the second, third or fourth wife. Migna does not approve of polygamy and has remained unmarried since her divorce. This, along with the lack of religious confession, has put her on the fringes of society. Though born and raised in Senegal, she is alienated from the society.

When I met Migna, she was in her late forties and had never once prayed. During a discussion in class one evening, when no other students had come, she told me about a situation that was troubling her. I asked her if we could pray about it, and she accepted. I prayed, and afterward she told me that she had never prayed before. Later, when she wanted to apply for a new job, she readily accepted my offer to pray for her. It was a long process, but during this time she would call me with updates about the situation. Finally, after several months, she called to say she had gotten the job. We both rejoiced at the Lord’s blessing.

During this conversation, she also asked me to help prepare her younger son for an exam. I told her that we really needed to pray about his situation, and she told me, “I have been praying every morning now.” I was so very happy to hear that! Her new job is not easy, and she realizes her need for help. Last week she had to travel for work, and I gave her Thoughts from the Mount of Blessings in French to read on the plane. We also prayed together. Please keep Migna and her family in your prayers because it is not easy to change life patterns, but with God all things are possible.

Also in Mbirdiam we have been busy. We are building a two-room building that can serve as a place to keep house guests as well as a place to hold meetings.

Last week, when the builder came to the house, I could see that he was not 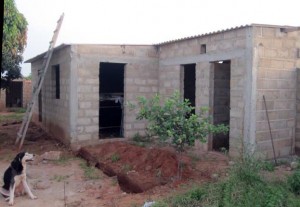 well and asked what was wrong. He had been working on the roof of the building in the rain and had thus become ill. Of course, I felt bad and gave him a dose of goldenseal and some echinacea tincture. I also gave him some to take home with instructions to continue for seven days. I explained to him how to do a fomentation on his chest, and he assured me that he would do it.

I tried to call him the next day, but was unable to get through to him, so I sent him a message asking about his condition. The following day I heard from him that he was feeling much better. I asked about the hydrotherapy treatment I had explained to him, and he told me that he had done it, and it had helped him significantly. I told him to continue for several days. He is now up and back to work, and the roof is finished. Praise the Lord!

What is also a blessing is that he is not charging for the construction of the building! He has gotten contracts to build two houses because of previous work done for me and has donated his labor for the building. I have only had to purchase the materials. God is so good!

On Friday, he told me that he needed to finish putting the roof on a neighboring house, and that he would continue the work on the next day, the Sabbath. I reminded him that the Sabbath was for everyone and that the Koran even talked about it. He looked at me, smiled and said that the owner of the house was not an Adventist. When he came to work on the house on Sunday, I asked him if he had worked the day before, and he replied, “No!” I have been told that this man has attended a Seventh-day Adventist church when he was in Switzerland. It is very hard for Muslims to convert. When they do, they are rejected by their families and the community. Please pray that God will strengthen him to accept His message of salvation and stand up for Him.

Please keep us in prayers, that God will continue to guide us as to how to reach His people here in Senegal. May the Almighty bless and keep you all as we wait for Jesus to come and take us home. Maranatha!

By Deborah Ndione. Email: senegalhealthproject@live.com. Support for the work in Senegal can be sent through Mission Projects International, PO Box 59656, Renton, WA 98058.