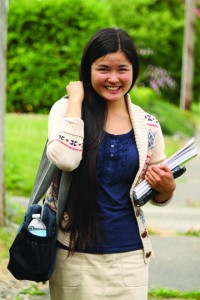 Michelle Kinjo ready to knock on doors with a bright smile.

This summer, I had the privilege of joining a summer colporteur program for youth. Having never canvassed before, I had no idea what to expect, but through the workings of providence and encouragement of friends and family, I decided to spend ten weeks selling Christian literature from door to door.

Memorizing the canvass and then reciting the whole page within two minutes was an easy task compared to actual canvassing. My first night out absolutely terrified me. Not being a natural talker, it was sheer torture for me to “bother people” and talk for hours in a day!  To top it all off, I got no sales the first day. I was discouraged and about ready to quit. But praise God for friends who encouraged me and helped me to do better! Soon, knocking on doors and meeting new people even became enjoyable to me.

As days flew by with all their different experiences, I learned to trust God in a different way. I had heard that human effort combined with divine power is omnipotent, but this summer I experienced it. Human effort definitely is involved in the canvassing work: running between doors, pushing even when you are tired, facing rejection, being ready to give an answer for what you believe and so much more. But all that effort would mean nothing unless, through the Holy Spirit, hearts are touched, lives are changed and seeds are planted. The amazing thing is that an extraordinary God would use ordinary me to accomplish extraordinary things. It truly is an amazing and humbling thought!

One man I met was in a desperate economic situation, and, as he hopelessly related to me his sorry plight, I was impressed to give him the little booklet Happiness for Life, more commonly known as Steps to Christ. Judging from appearances—his tattered clothes hung heavily with the smell of tobacco—I had no idea if this man would even tolerate religion. But his eyes lighted up as he eagerly took the book. He had been raised as a Christian and was just at the point where he was trying to decide whether God really cares. We were able to pray together, and, as I was leaving, he thanked me with tear-filled eyes and exclaimed, “God sent you here for me today!” As my partner came up on the other side of the road behind me, he saw the same man intently reading his booklet. I pray that he will read and take to heart all the precious lessons, and turn to the only Source where he is sure to find treasures that will never pass away. 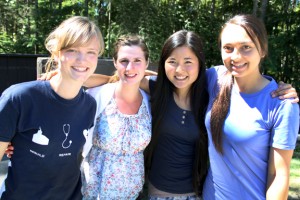 Another experience that I will never forget had something to do with the infamous little red and silver signs people like to hang over doors and apartments. Although we actually were not “soliciting,” most people do not see the difference between accepting donations and soliciting. Well, my heart started racing again as I saw one of these signs plastered across an apartment complex. The first door opened to a man (I will call him Bob) who obviously meant what he had posted, and as he dismissed me, he told me with shouts and threats that the sign applied to the whole apartment complex and that if wanted to get it I would have to pay the whole price. Since Bob was watching, I had no choice but to leave. But I was sorry to leave all these doors unworked, so, after much thinking and prayer, I sneaked back into the complex a second time. All was well as I hurried from door to door on the side of the building where Bob could not see me, leaving a trail of GLOW tracts, but the doors quickly ran out, and I was soon knocking on doors right across from Bob’s room. Bob’s window was open, but, with my heart racing, I knocked on the door in front of me. A young man answered, but as I started on my canvass, Bob spotted me and began shouting again behind my back. I prayed for swiftness and courage as I briefly canvassed the young man. Although he did not seem very interested at first, one of the DVDs (on Daniel 2, explaining how history proves the validity of the Bible) really caught his interest, and he decided to get it. I was so excited that someone in that apartment complex got something that I almost forgot about Bob, who had mysteriously quieted down during the canvass. As soon as I finished, however, Bob practically chased me out of the complex the second time. I sent up a prayer of gratitude that the cause of Christ had won yet another victory that day, despite the resistance.

Meeting people who are truly excited about the books we carry, seeing hardened atheists promising with tears to read The Great Controversy or Desire of Ages and seemingly unconcerned teens genuinely interested in our message DVDs, getting to pray with discouraged people everywhere or coming across children who empty the last of their piggy banks just to get a story book, are all special memories over the summer that I will never forget. Having caught a small glimpse of how much joy comes from personal ministry, I have been challenged to start looking for more ways to witness for Jesus in my everyday life. Maybe it is leaving a GLOW tract at the next gas stop, or being a friend to someone; maybe it is visiting that neighbor next door or even just giving a genuine smile. God can bless our efforts, however small, if done with an eye single to the glory of God.  “Christ does not bid His followers ‘strive to shine.’ He says, ‘Let your light shine.’ If you have received the grace of God, the light is in you. Remove the obstructions, and the Lord’s glory will be revealed. The light will shine forth to penetrate and dispel the darkness. You cannot help shining within the range of your influence.” Christ’s Object Lessons, 420.